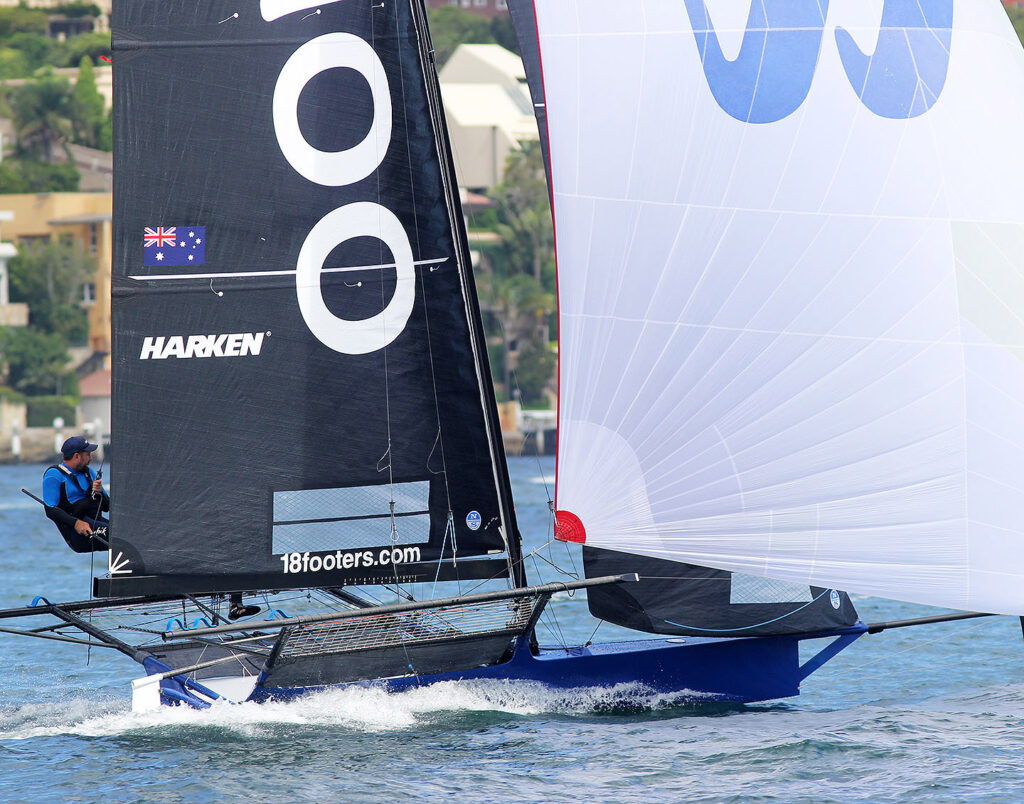 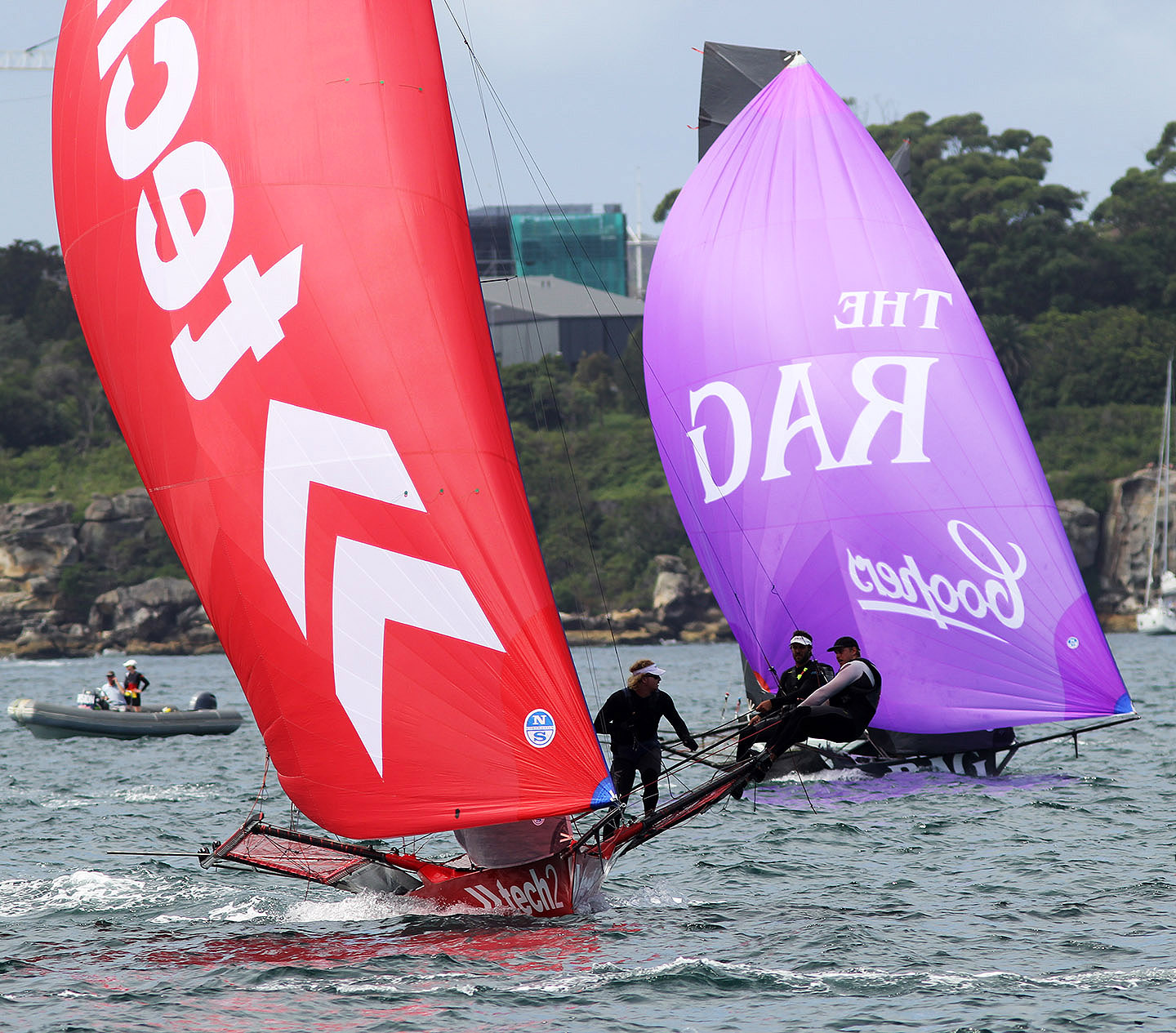 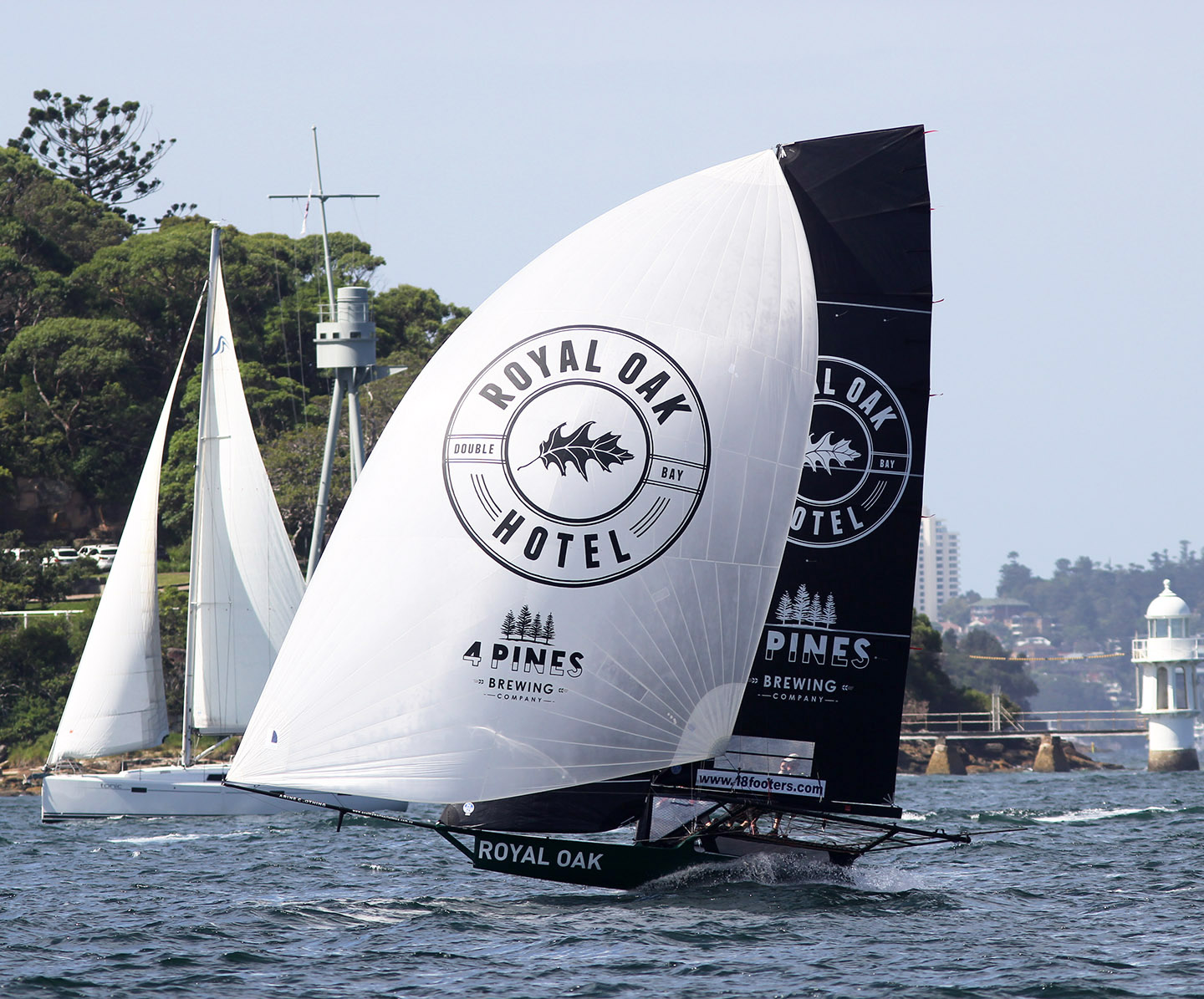 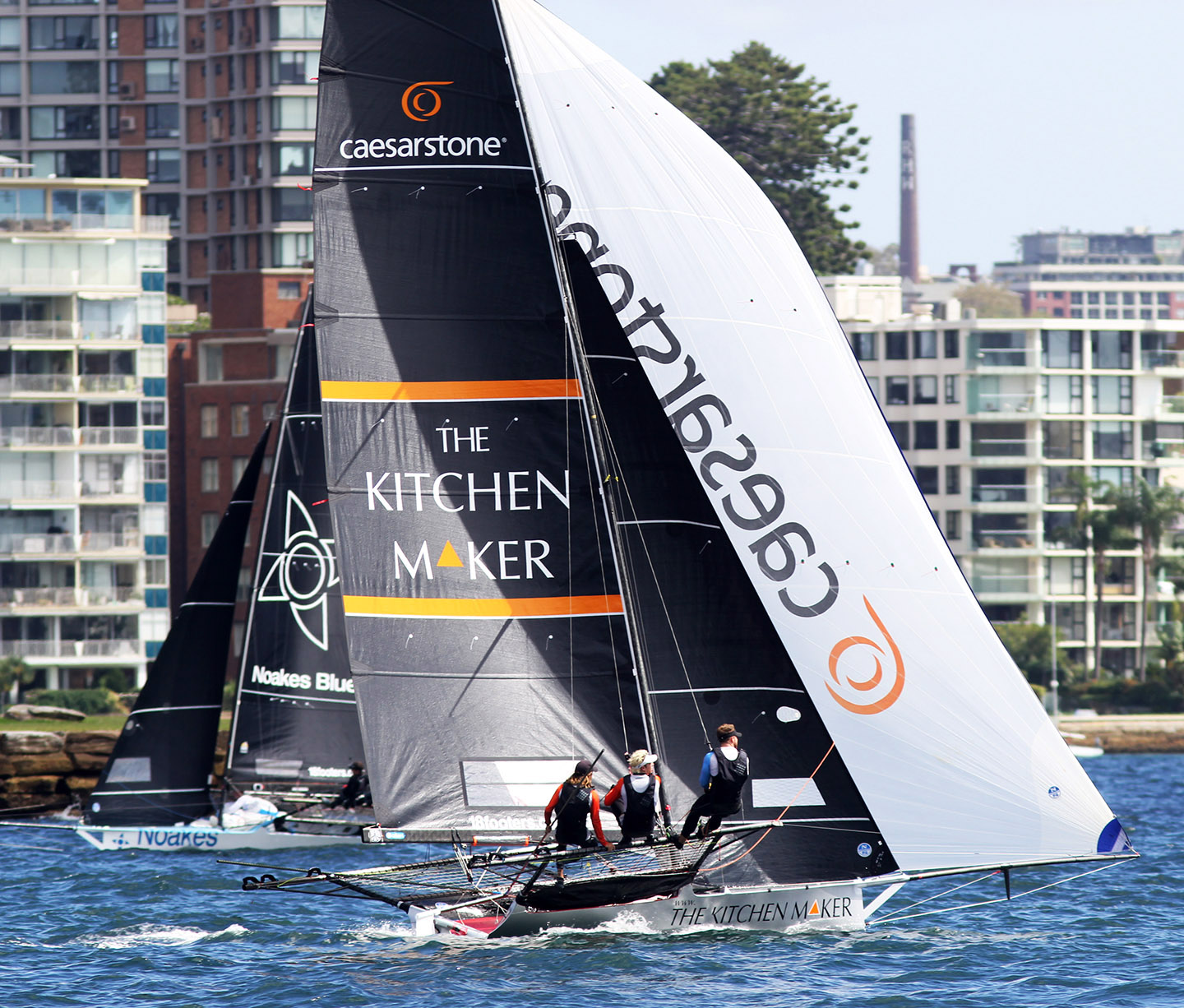 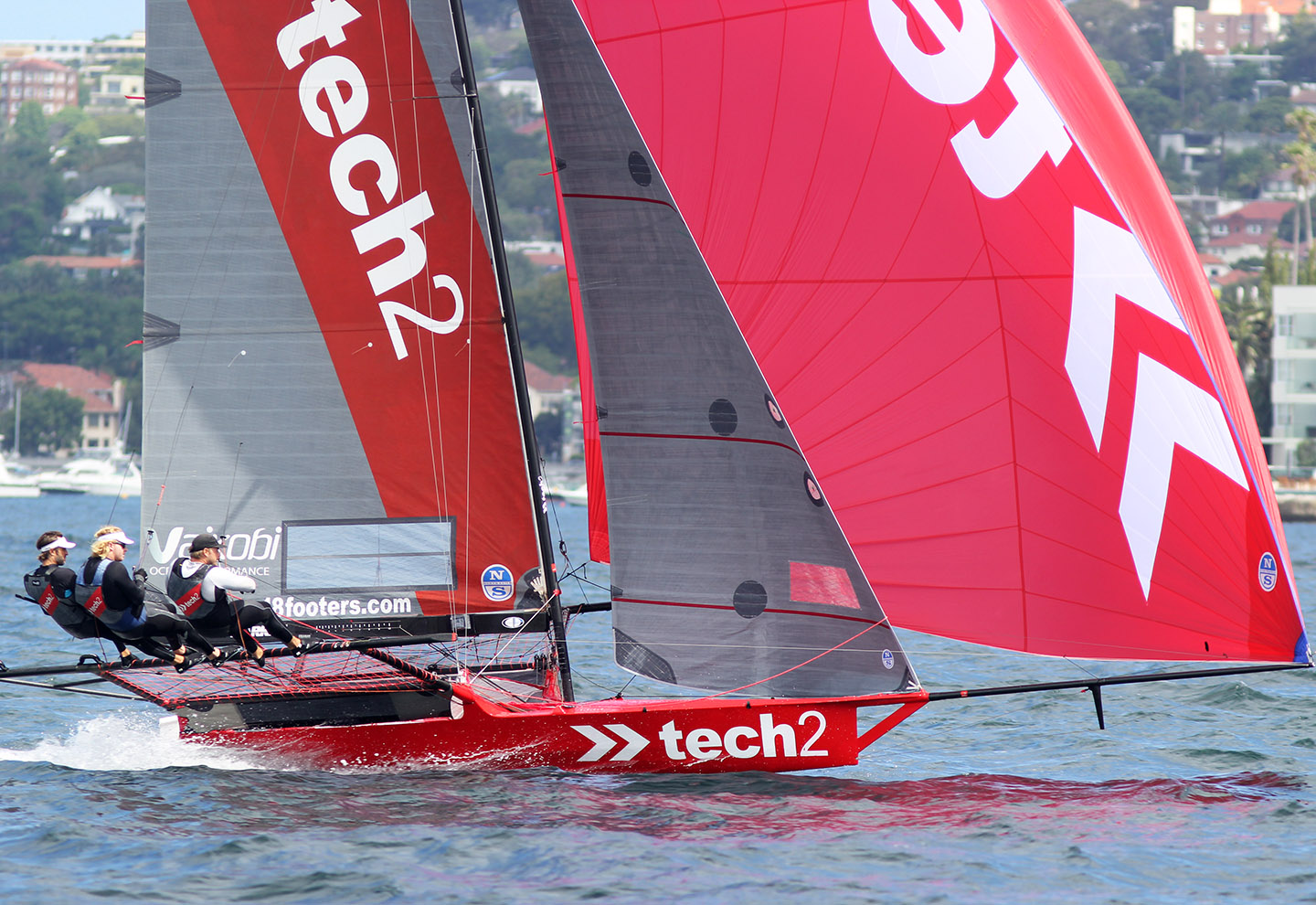 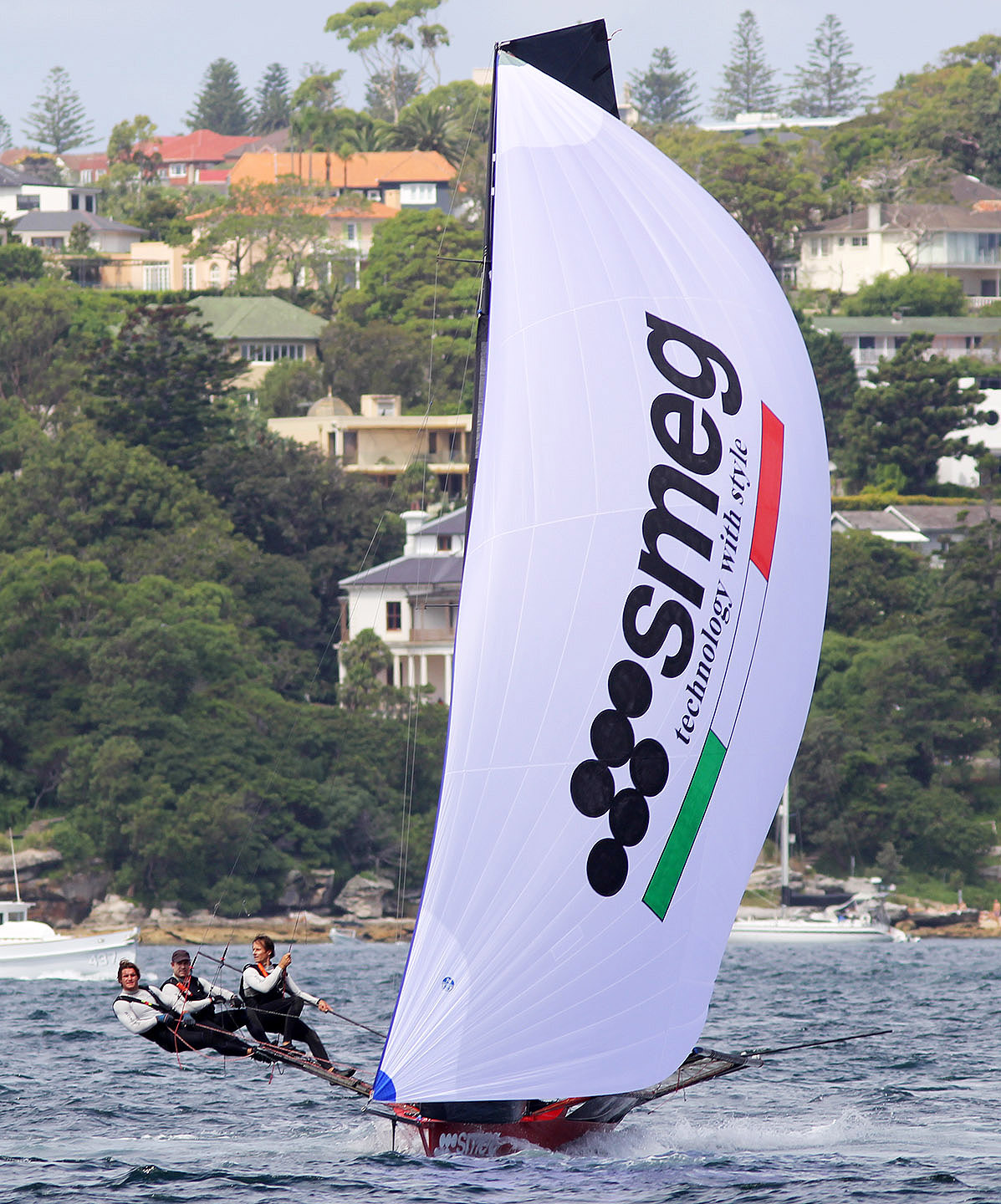 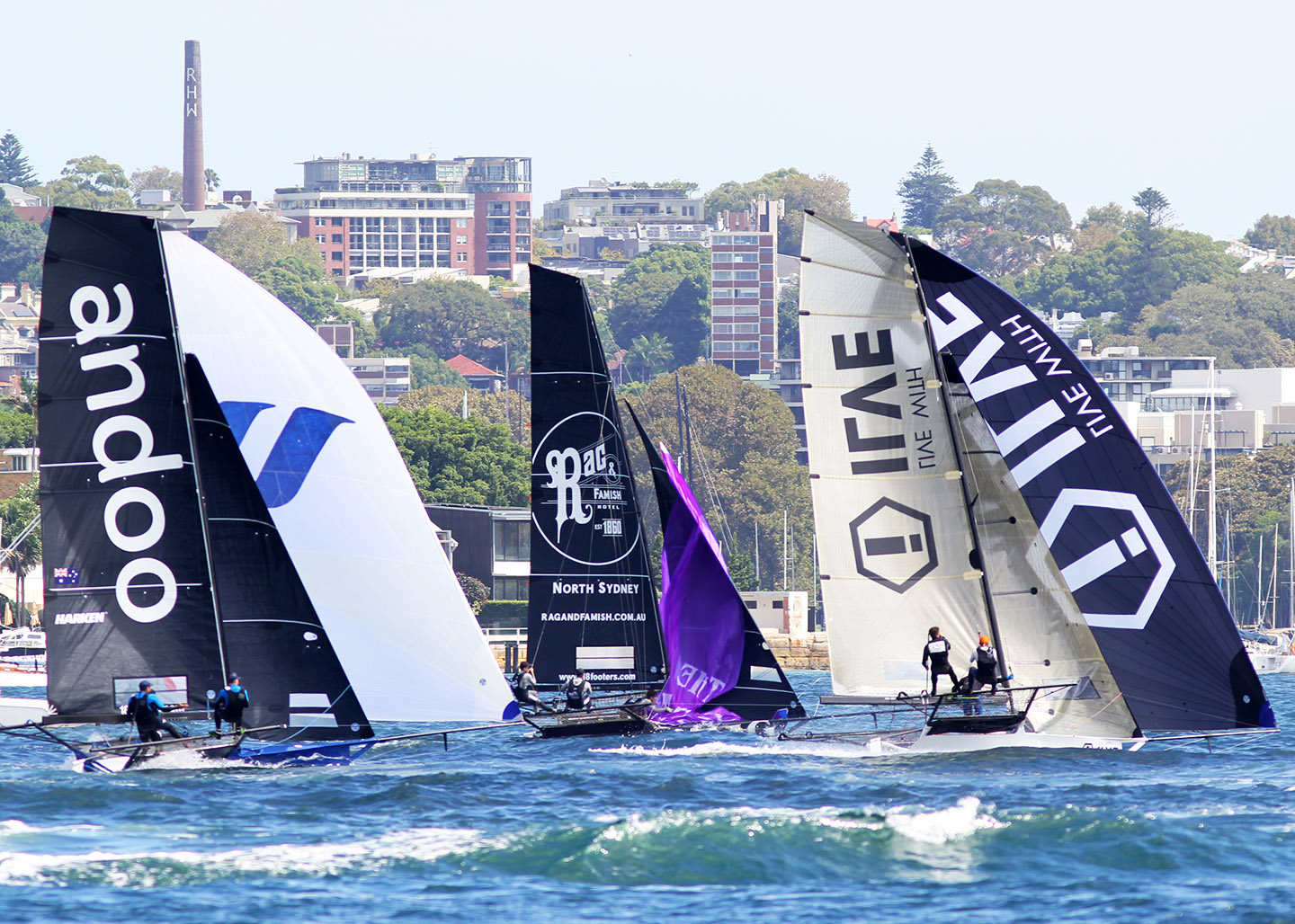 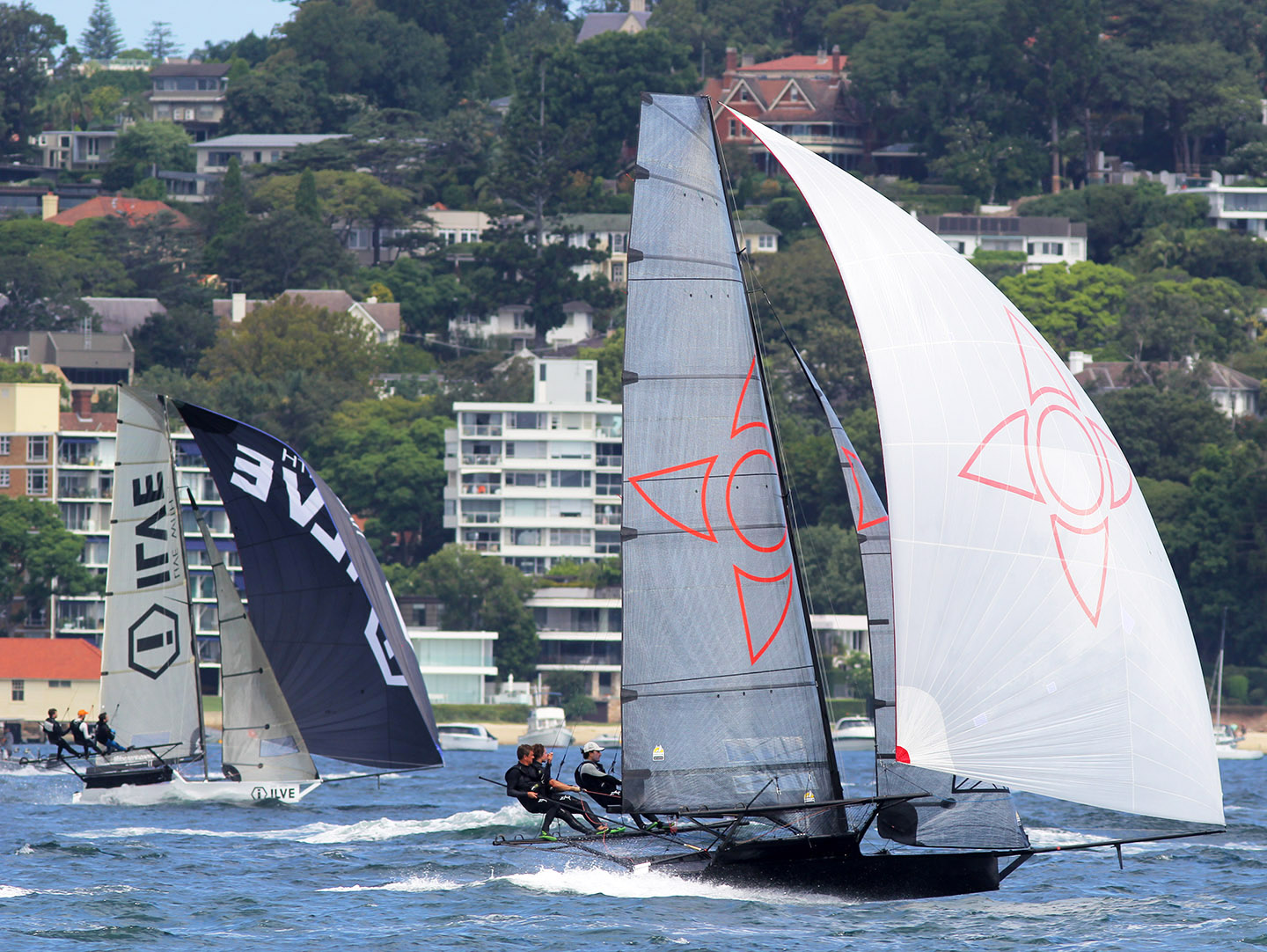 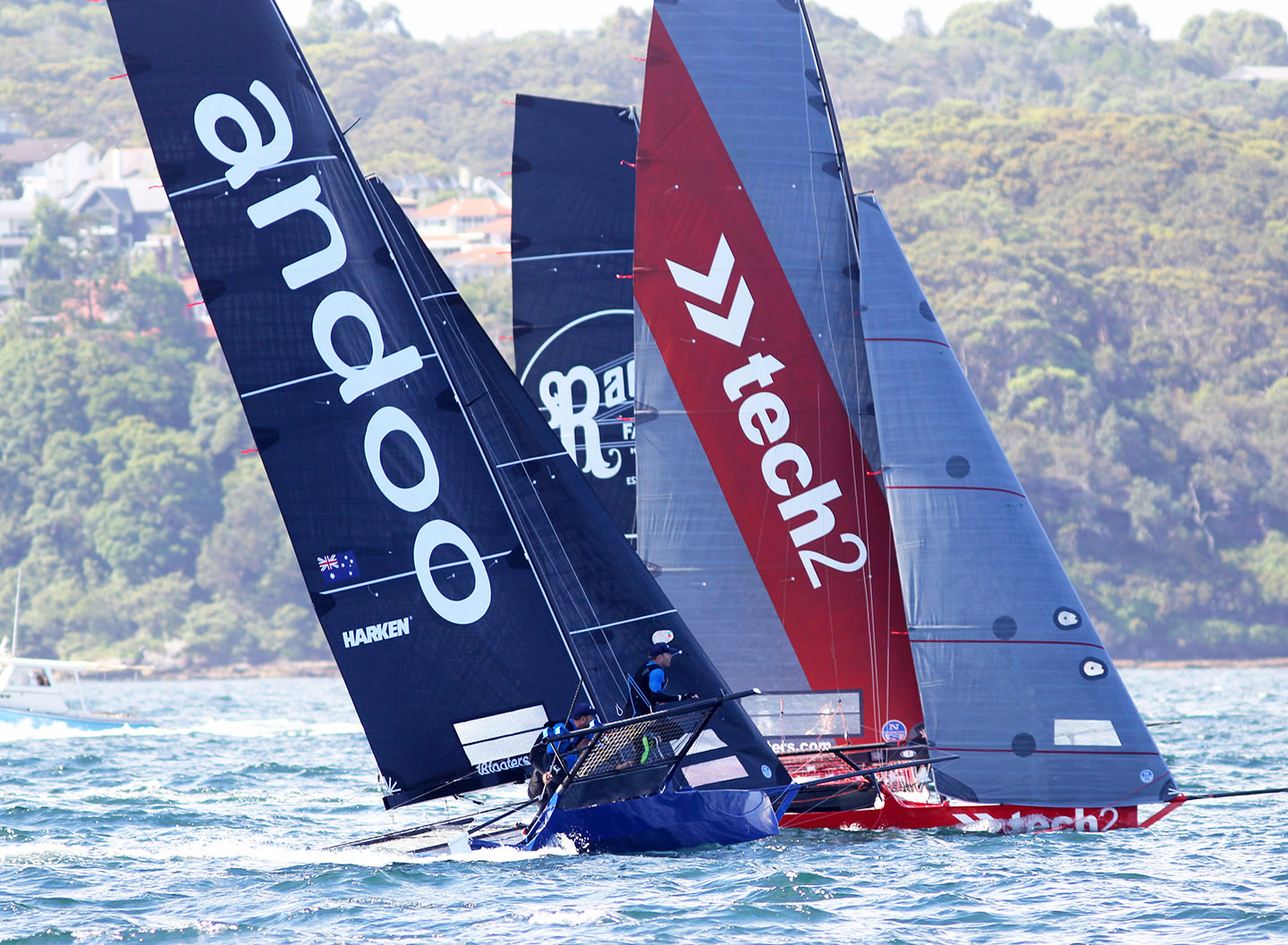 Battle for the early lead in Race 7. Pic - 18ft skiffs 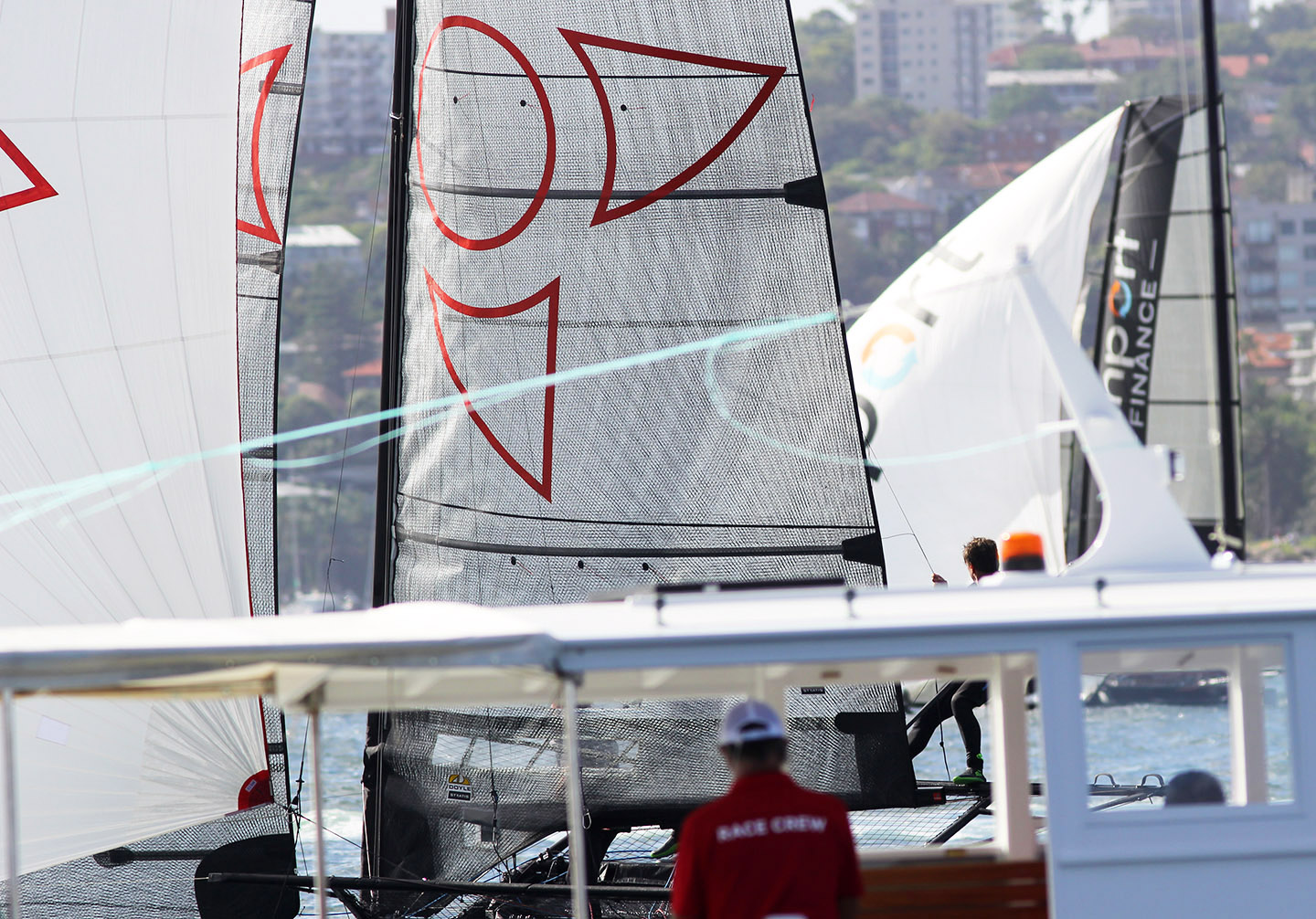 With three wins, a second and two thirds from the seven races, Andoo finished the championship with a total of 14 points, followed by Smeg (Michael Coxon, Ricky Bridge, Zac Barnabas) on 22 points and Noakesailing (Sean Langman, Ed Powys, Josh Porebski) on 33 points.

Today’s racing was split into two distinctive races with the first (Race 6) sailed in a patchy NE breeze and the latter, Race 7, in a much steadier breeze.

In a tight finish Shaw and Partners Financial Services (Steve Thomas) came home in fourth place, ahead of Andoo and Ilve (Jono Whitty).

Macartney and his team grabbed the lead mid-way up the first beat when they elected to go to the RHS of the course north of Rose Bay and picked up a favourable breeze which enabled Tech2 to lead narrowly from from Shaw & Partners, Rag & Famish Hotel (Harry Price) and Yandoo (John Winning).

Tech2’s downwind speed and the team’s decision to go back to the same side of the course which gave it the lead was a winner and Tech2 totally dominated the rest of the race to score an easy victory.

The breeze was more settled and definitely a little fresher as the final race got away with Andoo and Tech2 immediately going into a match race style contest in a pre-start jostle, then up the first windward leg.

Jarvin and his team then elected to go to the northern shore (LHS of the course) as they did in the previous race while Macartney and his team repeated their earlier race decision and went to the right.

Ilve and Balmain Slake continued to lead the fleet back down the harbour to the bottom mark north of Clark Island before a gear failure to Ilve saw the team forced to retire, leaving Balmain Slake a narrow leader over Noakesailing, Andoo, Finport Finance, Smeg and Fisher & Paykel.

A problem for the Balmain Slake team on the spinnaker drop cost it the lead and a good battle developed between Noakesailing and Finport Finance over the entire final lap of the course.

With only 200 metres left on the course it appeared that the Sean Langman-led Noakesailing would be the winner before a wonderful finishing burst by Finport Finance, gave Keagan York and his team its best result of the season when they crossed just 1s ahead of Noakesailing.

Andoo finished another 11s back in third place, which was enough to give the team its championship victory.

In yet another tight finish, Smeg finished fourth ahead of Lazarus Capital Partners and Balmain Slake.

Next Sunday is the last race of the Club Championship.  Spectators can follow the racing on board the club’s spectator ferry on Sunday February 13, however due to the COVID-19 policy, numbers are limited.  Booking online through the club’s website is essential: http://www.18footers.com.au/18-footers-sailing/spectator-ferry/

Don’t forget – the 2022 JJ Giltinan Championship will be sailed on Sydney Harbour, from March 5-13.