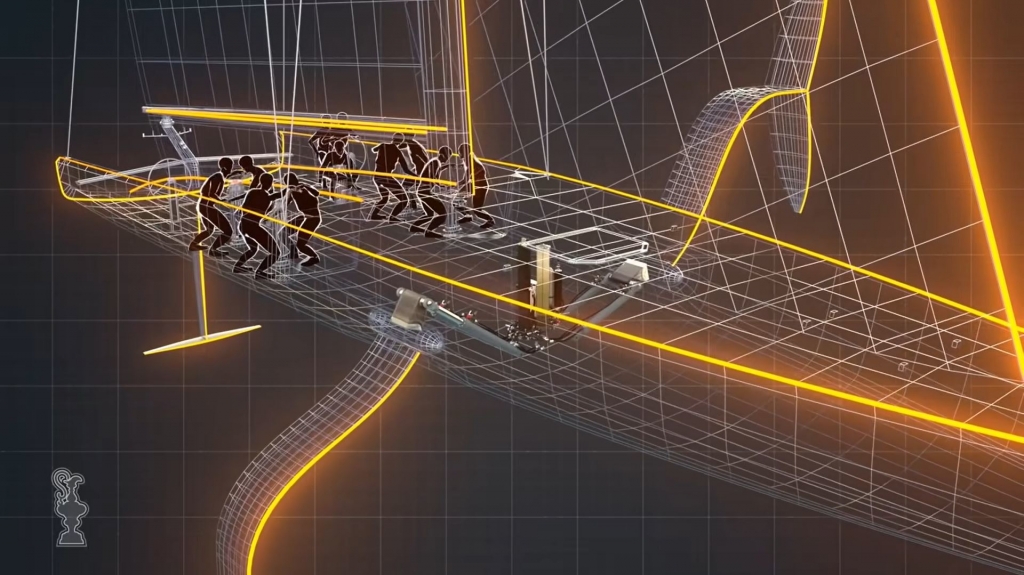 Handling a boat like the AC75 requires the use of sophisticated management and control systems actioning a compact network of valves and pistons.

The AC75 is an extremely complex boat both from an engineering and a sailing point of view. The boat weighs about 7 tons and can reach 30 knots with just 12 knots of wind, without touching the water and balanced on a foil of a few square meters. An engineering gem, but also of a complex hydraulic and electronic system.

There are four main systems that rule the functioning of an AC75:

The regulation states that these four systems must work independently and communicate with each other only through fixed “channels”, i.e. through the Media System provided by the Defender, which allows the various systems to exchange information according to pre-established protocols.

For example, the ECC can send information to the ILS, but cannot receive it from the ILS. This type of feedback loop is set to avoid having a boat using automated systems, such as autopilot or automated flap management.

In addition, the ECC and ILS can send information to the sailors through the Media System only, which adds one second of delay to the ILS data. This means that the information coming from the sensors installed in the boat appears on the sailors’ displays with a one-second delay. This setting helps to avoid using computers to sail the boat.

The onboard systems and automation of the boat are completely hydraulic. Inside the hull there is a complex system of pistons connected to the ropes that control manoeuvers, which may be the mainsail base, or the jib Cunningham. The movement of these pistons, driven by pumping oil into the system, allows for example to trim a sail. The oil, which flows through a hydraulic network and drives the pistons inside the hull, is pumped by the grinders through four pedestals.

By operating the valves installed on board, the sailors decide on which pump to put oil, depending on the handling and manoeuvering needs. For example, a gybe requires a complex combination of control switches that correspond to the closing and opening of specific valves. There are various computers on board and one of them is dedicated to manage the hydraulics, with a software that allows the sailors to operate the hydraulic valves that move the oil using control buttons.

On every sailing day, before the boat leaves the shed, a complex system review called the “Mecca System Check” is carried out by the technicians. It is a very thorough control of all the functions for each station: all the keys on displays and controllers, and each individual button are checked to ensure proper functioning; the correct opening of the valves, and the correct calibration of the cylinder are also checked by measuring the excursion and the figures at the end of the stroke and on release.

When the boat is stepped and in the water, another system check is carried out by the sailors on board. Each of them checks their own station and that all functions are calibrated: much like the sound check that musicians carry out before a concert.

These systems are monitored during navigation and racing. The technicians and engineers follow the AC75 from the chase boat and monitor the numbers they receive from the onboard systems on their computers, like in a Formula 1 pit wall. During the race phases, all the data coming in from the several sensors installed on board are kept under control, including the oil temperature and pressure, loads, performance. In the event of any anomalies in the systems, the shore team is ready to fix any problem between the races.

Within the Luna Rossa Prada Pirelli team, the Mechatronics is a specific department fully dedicated to the study and development of these systems; it is made up of mechanical, hydraulic, electronic and software engineers. The entire department works on the creation and management of these highly complex systems that serve to operate the entire boat. Without these systems, it would be practically impossible to fly an AC75.