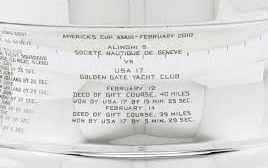 Having run out of room to put their America's Cup win in Bermuda on the Auld Mug, the Royal New Zealand Yacht Squadron are having a silver band on the trophy re-modelled to fit their victories on.

The New York Yacht Club added a silver band in 1958 when America's Cup racing began again after a 21 year lull. All the races from 1958 through 1995 are engraved on this first base. RNZYS added a second base in 2000 since they had filled the last space on the 1958 band to record their 1995 victory.

The trophy has now been sent Garrard's who designed and made the America's Cup in 1848.

It was one of six identical silver ewers made by Garrard. The Marquess of Anglesey purchased one and donated it to the Royal Yacht Squadron to be used as a prize.

The problem of finding space for engraving is not unusual. Ice hockey's Stanley Cup at one time had so many bands added that it was called the “Stovepipe Cup.”

Now the NHL “retires” rings from the Stanley Cup and displays them at the Hockey Hall of Fame, so the trophy has only five bands.