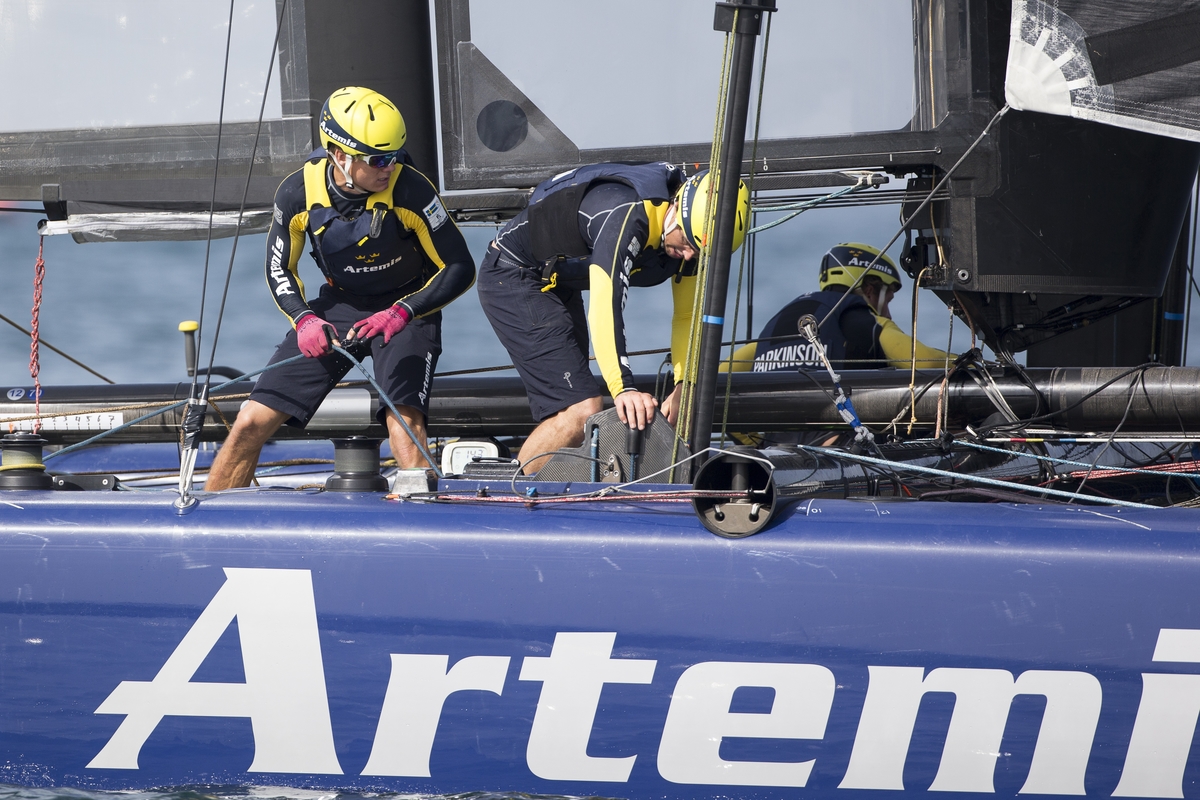 The six America’s Cup teams took to the water in Oman on Friday for official practice racing, the first competition the fleet has seen since racing in Bermuda in October.

At the morning press conference, team skippers all expressed an eagerness to get back on the race course after a winter of technical development towards the America’s Cup Class boats that will launch and race in 2017.

Shifting back into race mode following months of development and testing is something the sailors are uniformly enthusiastic about.

“As a team, we’re very excited to be here in Oman,” said ORACLE TEAM USA skipper Jimmy Spithill. “We’ve had a great winter in Bermuda where we’ve been working very, very hard on our technical program. But we always look forward to getting out and racing. That’s what we love to do.”

Conditions were light for Friday’s practice, with winds in the 4-7 knot range. The forecast is for 7-10 knots over the weekend.

“It’s going to be fairly light over the next couple of days, but we’re all just excited to be getting racing again,” said Emirates Team New Zealand skipper Glenn Ashby. “Getting clear on the start line is going to be key and that will be a focus all weekend.”

Artemis Racing found the most success on Friday, winning both fleet races and taking one of two match races. Earlier, Iain Percy spoke about how the team is on an upswing following the win in Bermuda.

“Certainly to end on a high going into the winter was important,” he said. “It’s motivating for everyone, especially after you’ve had a couple of mishaps like we did in the first two events.”

“We’ve had a little bit of experience racing here. It’s generally lighter winds, which presents a different challenge. Our guys are up for it and looking forward to getting racing again. That’s what we want to do as competitors.”

“It’s the third time I’ve been here and last time the racing was in the same place as where we’ll be this weekend. It was certainly a difficult race course then, but also rewarding if you sailed well. It will be a good challenge,” agreed Dean Barker, skipper of SoftBank Team Japan.

Franck Cammas, the skipper of Groupama Team France, was on a chase boat today, still recovering from a foot injury he suffered in training before Christmas. He could be seen congratulating replacement helmsman Adam Minoprio after a match race victory.

“I’m happy with the recovery. I’m not ready to race, but I’m hoping to get on a boat next week for the first time. This is the goal,” Cammas said. “Adam is a good addition to the team. He has worked with Luna Rossa in the past and has done a lot of sailing in the AC45, so I’m happy to have him with us, and we hope to see him do well.”

The Louis Vuitton America’s Cup World Series Oman would not have been possible without the support and organization of Oman Sail.

Ghada Al-Said, the Director of Communication at Oman Sail, says hosting an America’s Cup event is a momentous occasion.

“This weekend marks the start of an historic moment for the Sultanate of Oman,” she said.

“Oman Sail has been tasked with creating a generation of sailors, through an active equal opportunity youth program; reigniting Oman’s maritime heritage; and raising awareness of the country as a high end tourism destination. Since 2008, we have endeavored to transform the Sultanate of Oman into a prominent sailing nation and make sailing a part of the country’s future. This is a milestone on that journey.”

A full “Where to Watch” guide can be found here