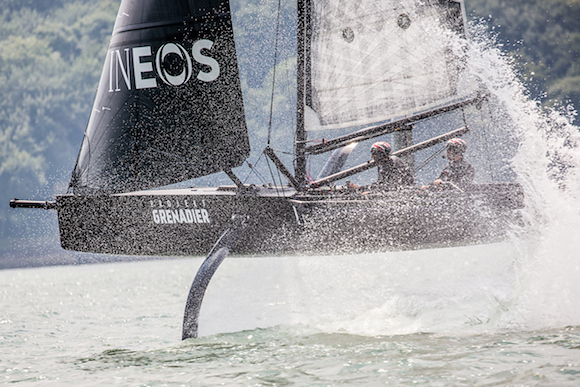 American rival Terry Hutchinson summed up being on his syndicate's scaled-down version of the 75-foot foiling monohulls to be used at Auckland 2021 “like getting into a car with my 16-year-old son driving for the first time … just wondering what could possibly go wrong.”

The two skippers have given first-hand accounts of their experiences from the opening phase of testing as teams use development programs for the build of their first full-scale racing yachts to be launched this year.

Ainslie, who heads the INEOS Team UK challenge, admitted there were some heart-in-mouth moments.

“As you can probably see by some of the footage, we've had some pretty big wipeouts, some fun moments, and some pretty exhilarating moments as well,” Ainslie told Yachtracing.life.

Ainslie said they had to trust the design genius of Emirates Team New Zealand as they worked off the design parameters for the revolutionary concept.

“Grant Dalton told me that this boat was going to work … it was going to be a fantastic boat, so we just believed that would be the case,” Ainslie said.

“In all seriousness, we didn't know. It only looked like a very, very exciting concept. We did have a meeting with Grant and (Team NZ design boss) Dan Bernasconi and a few of the other guys from the other teams and talked through it. A few eyebrows were raised, and I think probably if you ask Grant and Dan honestly, they weren't entirely sure if the concept would work either.

Read the full story and see the video at Stuff.co.nz.