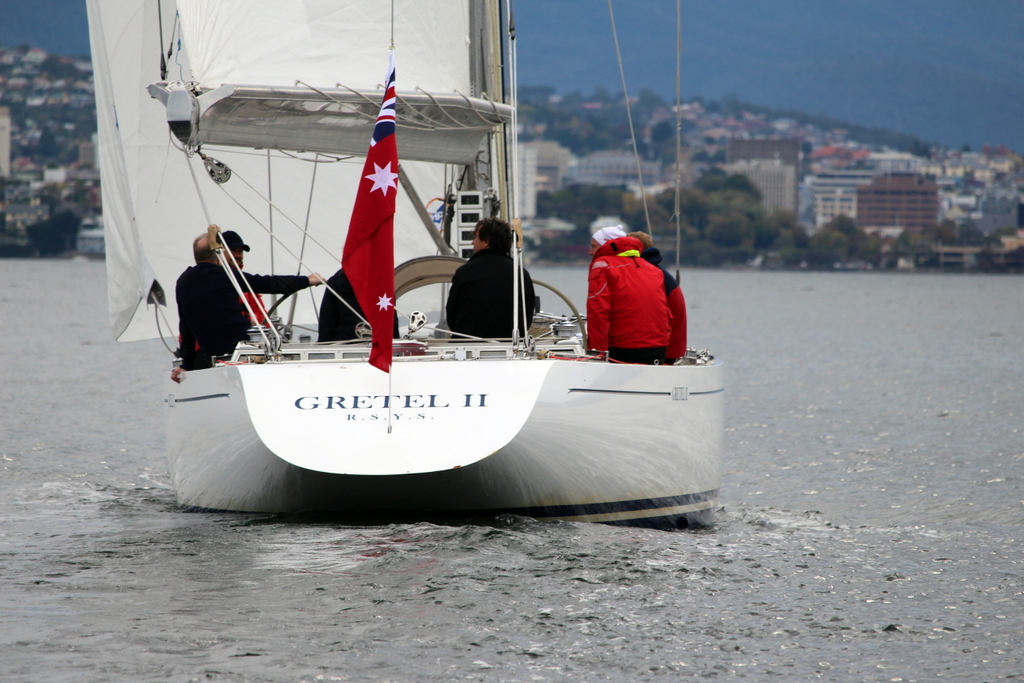 Famous America’s Cup challenger Gretel II, now based in Hobart, will return to racing on Sunday in the Channel Race, a 30 nautical mile day race from Hobart down the River Derwent to Bligh Point in the D’Entrecasteaux Channel and return.

The classic 12-metre class yacht, which challenged for the America’s Cup at Newport, Rhode Island in 1972 and again in 1977, will also line up for Saturday afternoon’s traditional Opening Day of the Sailing Season sail past in Sullivan’s Cove.

Gretel II’s owner, Michael Maxwell, is flying down from Sydney to skipper the yacht with a crew of local sailors put together by champion Hobart sailor, Steven Shield.

“GII (as she known in America’s Cup history) is in immaculate condition, having just undergone a refurbishing of her timber hull, which in two years’ time will be 60 years old,” Shield said yesterday.

“She also has a new mainsail and number one and number three headsails, made of Dacron in keeping with her history.

“The owner plans to race GII in several longer day races on the Derwent and the Channel over the summer as well as inviting interested sailors to crew aboard her,” Shield added.

Gretel II was designed by the late Alan Payne for newspaper magnate Sir Frank Packer and had many innovations, including an advanced hull form, trim tab on the rudder, a bendy riveted aluminium mast, ‘coffee grinder’ winches and twin steering wheels.

Racing against the US defender Intrepid in 1970 with Sir James Hardy as skipper, she had a luckless series, winning one race and controversially disqualified after finishing first in another. Intrepid won 4-1.

In 1977, another champion yachtsman, Gordon Ingate, skippered GII in the Challenger series with a crew that became known as ‘Dad’s Navy’. She proved no match for the latest 12-metres but created great interest at Newport.

The yacht was gifted to the Sydney Maritime Museum but was not well maintained until current owner Michael Maxwell bought her and had the ‘twelve’ extensively refitted.

Gretel II already has one win to her credit on the Derwent, in the Green Island Race on Australia Day 2011 following a visit for the Australian Wooden Boat Festival. Her 1977 America’s Cup skipper Gordon Ingate was on the helm.

A smart fleet of 18 yachts have been entered for Sunday’s Channel Race, traditionally the RYCT’s first race of the summer sailing season.

Lining up in Division 1 against Gretel II will be ocean racers Oskana, Whistler, The Fork in Road, Filepro and Ciao Baby II.

The Channel Race will start at 10am from off Castray Esplanade with all three divisions starting together.