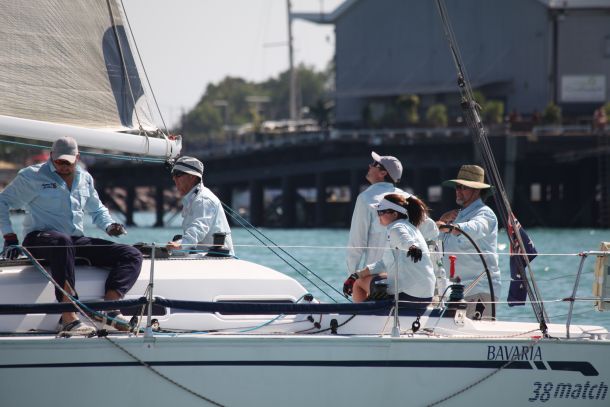 Congratulations to skipper John Mulkearns and his crew aboard Gameset placing 1st on handicap, 2014 Darwin to Ambon Yacht Race and Rally in the racing monohull (IRC) division – “the best sailors in the race, the ones that won on handicap”.

The race starts east of Stokes Hill Wharf, Darwin Harbour to the finish line at the village of Amahusu, Ambon Harbour, approx. 3°43’S and 128°08’E, a distance of approximately 634 nautical miles, 355⁰ true from Darwin. The south-easterly trade winds provide a wonderful spinnaker run, while the tropical waters and magnificent archipelago provide a spectacular place to challenge yourself against your rivals – a blue water classic with champagne sailing.

John bought Gameset, in 2010 as a competitive Bavaria 38 Match in Sydney.  It arrived in Darwin in 2010, where John has lived for 34 years and he raced Gameset at Hamilton Island Race Week. In 2011, Darwin’s Dinah Beach Cruising Yacht Association (DBCYA) introduced the IRC division to the Ambon race due to demand from some of the local skippers.  John and his crew eagerly responded wanting to prove their skills and the boat and have sailed every race since with great results.