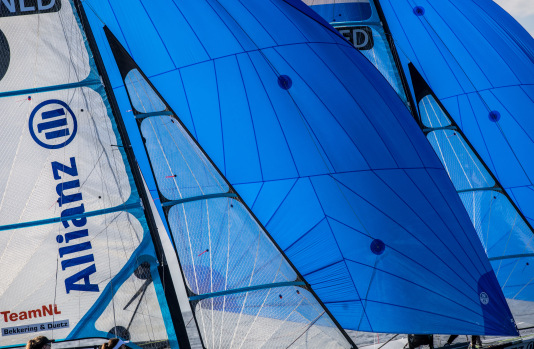 A last test before the Tokyo Games

The Allianz Regatta, to be held from June 2-13 in Medemblik, is the last serious opportunity to compete and qualify prior to the Tokyo Olympic Games.

Part of the Hempel World Cup Series in the past, the Allianz Regatta has been sailing in locations such as Miami USA, Genoa Italy, Hyéres France and Enoshima Japan.

This time, nearly 300 sailors from 47 countries have registered, in which eight out of 10 Olympic classes will compete at the same event, so there is a strong field of participants.

The Laser (now called Ilca 7 class) is currently up to 87 entries, four of which are from the top ten of the last World Cup, with 12 qualified for Tokyo.

In the Laser Radial (Ilca 6) there are 71 entrants, of which 14 from the top 15 of the most recent World Cup are present, with 23 qualified for this year’s Games.

Among the 48 teams in the 49er are six who have qualified for Tokyo and six from the top 13 of the most recent World Cup. In the 49erFX class, 29 teams have registered.

In the other classes are slightly smaller fields of between 10 and 20 participants. The 470 Men’s and Women’s events have been cancelled due to insufficient registrations.

Registration closes on Friday, May 28 at 6pm, so it is possible total numbers could increase.

“We are Looking forward to running the first multi-class event in Olympic sailing since COVID,” Event director, Frans Hin said.

“These are challenging times for all, but the Olympic athletes have remained focussed on preparing for the Tokyo Games.

“We are very excited to partner with World Sailing and host an official Hempel World Cup Series event,” Hin said. “We have strong entries now in four Olympic classes and it looks like some nations will use the event as a final national qualifier for Tokyo. It allows the sailors one last serious test ahead of the Olympic Games

“As organisers on behalf of the Dutch Sailing Federation, we can say the event will be run in a safe manner for all participants and locals.”

The Allianz Regatta in 2021 will be split into two weeks, ensuring sufficient space and time to allow competitions to com take place in a safe manner, with due observance of the applicable Corona measures.