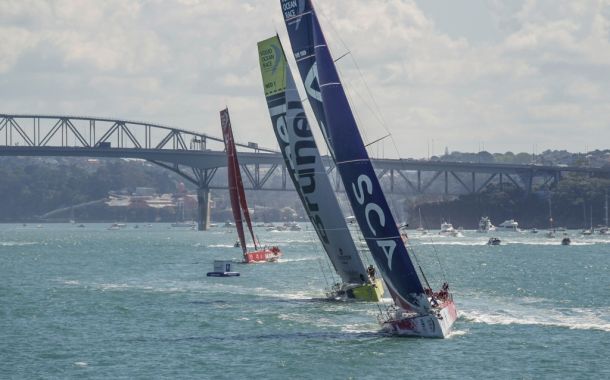 AUCKLAND, New Zealand, March 14 – Team SCA became the only crew in the Volvo Ocean Race to claim two in-port victories on Saturday after a thrilling start-to-finish win in Auckland – “by keeping it simple”. It was a fight all the way, however, in surely the most exciting in-port race in the 2014-15 edition with Team Brunel (Bouwe Bekking/NED) narrowly beaten to the line by Sam Davies’ (GBR) all-women crew.

Afterwards, the women’s boat’s navigator Libby Greenhalgh (GBR) summed up their success in the New Zealand Herald In-Port Race: “We won it because we kept it simple, kept our manoeuvres to a minimum and that’s what paid out for us.”

Team Brunel skipper Bekking, however, had the consolation of moving joint top of the In-Port Race standings on 14 points with Abu Dhabi Ocean Racing (Ian Walker/GBR) who lost out in their own enthralling tussle with Team Alvimedica (Charlie Enright/USA) for fifth place. The Turkish/American boat ran down ‘Azzam’ with barely metres to spare at the finish line, cheered on by fans in an absolutely packed Auckland harbour. The Emirati boat retains the edge, however, thanks to the best individual results overall in the series (see panel above).

Just as in their previous in-port success in Abu Dhabi in early January, Davies and her crew have shown in the short races they are more than a match for their male rivals and this success will be another confidence-booster ahead of the weather-delayed Leg 5 from Auckland to Itajaí.

“We’re really happy, the City of Sails made a fantastic arena for us to race in today,” said a jubilant Davies. “It was really, really hard. We learned that in the practice races beforehand, we made all the mistakes then and today was just brilliant. We had a really good teamwork, a great start, good tactics, everything worked perfectly onboard Team SCA today. I’m really happy because it’s going to boost our team’s morale for the next two days while we wait for (Cyclone) Pam to leave us some space to go out in the Southern Ocean.”

Greenhalgh added: “We’re stoked. It wasn’t really secure until the last little bit when we’d gone around the bottom mark.”

MAPFRE, who had led the chase to catch Team SCA after another runaway start, enjoyed the consolation of a third place podium finish on the return of skipper Iker Martínez (ESP) after he missed the last two legs to concentrate on Olympic training for Rio 2016.

The leg departure for the treacherous Southern Ocean/Cape Horn leg to Brazil has been delayed until midday local time on Tuesday at the earliest because of the Category 5 Cyclone Pam, which has been blowing winds of around 250 kilometres an hour.

Race management will make a decision in the next 24 hours to confirm that the fleet is safe to sail at that time having postponed the departure from Sunday at 1400 local time (0100 GMT).