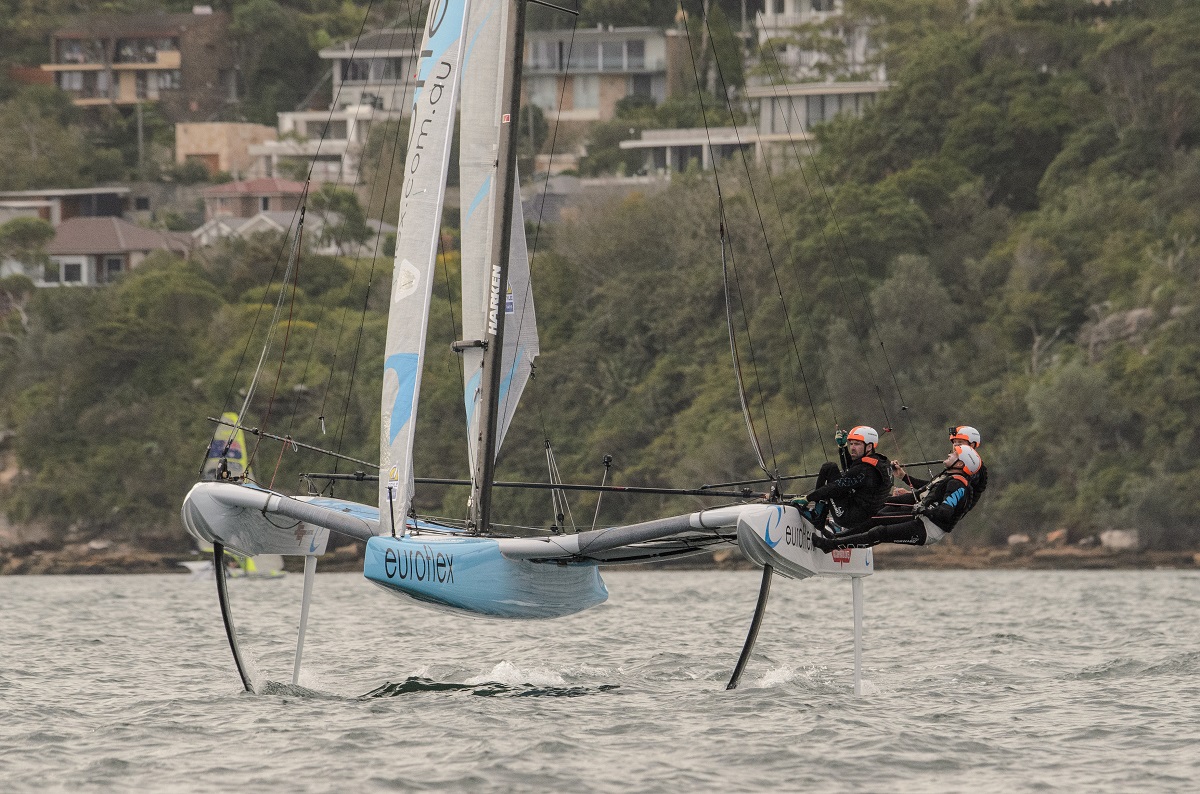 The SuperFoiler title race is on after Euroflex and tech2 finished level at the top on 13 points lighting the fuse for the Expr3ss! SuperFoiler Grand Prix on Sydney.Harbour.

“To be equal first after day one, we are happy with that,” said Euroflex skipper and Olympic gold medallist Nathan Outteridge, who notched up two firsts and a last to finish level with tech2 after the opening day of hostilities. “We had some good battles with tech2,” he said.

“We are peaking at the right time, we have rattle their (Eurfolex) feathers,” said tech2’s skipper and Volvo Ocean Race winner Luke Parkinson, “We are ready to get back in the ring for round two tomorrow.”

In the opening race of the day Euroflex edged out tech2 in an agonising crawl to the line. It was a frustrating finish for the red flyer who had led the entire race only to be overtaken by the series leader in the final metres.

“We have come into a new mantra throughout the series; you can’t win the regatta on day one you can lose it. We are just trying to put ourselves in a great position where we can win the regatta. It was a tough day, but tough for the entire fleet so we are just happy to be up there,” said tech2’s mainsheet hand Ayden Menzies who crossed ahead of iD Intranet skipper Paul Campbell-James in the race opener.

After race one was clinched by Euroflex, light and patchy breezes forced race two into a shortened course where Steve Thomas’s Pavement seized the prize ahead of tech2, who again had to settle for second.

“We had three good starts today but the first race we timed out because we were trying to foil, so to come away with the wind was nice because there was a bit of redemption on that,” said Pavement skipper Steve Thomas who sits one point behind the front runners on twelve.

It was a satisfying victory for Rhys Mara and Dan Morris who were racing alongside Thomas for the first time since a massive wipe-out in Busselton.

“First day to be within one point, it is all good. At the moment we are just trying to have clean races, not take too many risks and just throw down a couple of keepers,” said Pavement bowman Dan Morris.

Race three belonged to Euroflex who crossed ahead of iD Intranet – Paul Campbell-James’ international hopefuls also in striking distance for the champion on eleven points.

“Obviously we are setting ourselves up for Sunday that is the main day, but you have to be consistent.” said Euroflex mainsheet hand and America’s Cup winner Glenn Ashby, “It was a tricky day, but at the same time a lot of fun, and when you get up and foiling and all the other boats aren’t you realise this is all right,”

The Expr3ss! SuperFoiler Grand Final – Sydney will be livestreamed on www.superfoiler.com on Saturday 24th and Sunday 25th of March 2018.