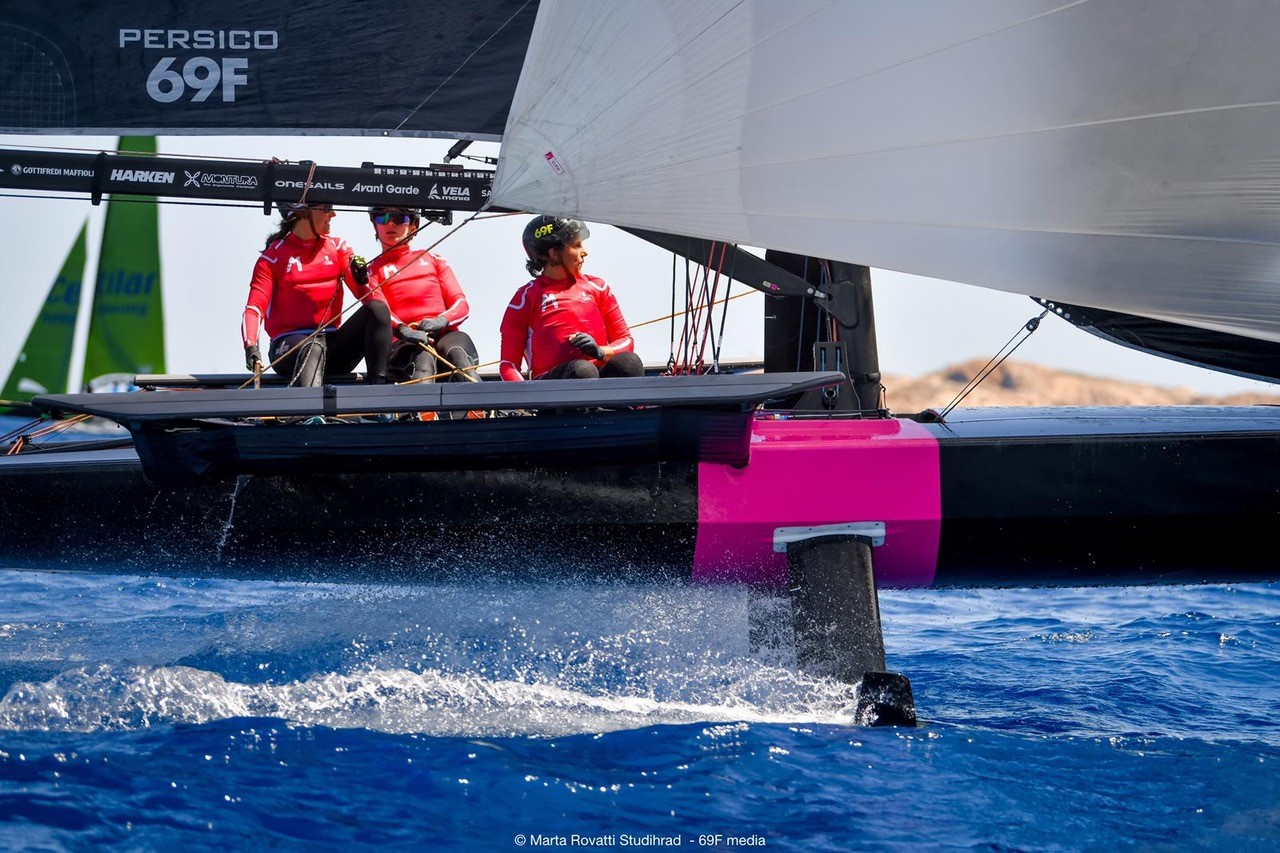 The 69F Team is fully in support of The Magenta Project’s initiatives and following a recent 69F training camp aimed at up-skilling female sailors. The 69F Team were keen to see an all-female team in the upcoming 69F events. Now, it’s finally happening! An all-female team, sponsored by GAC Pindar, is participating in the second event of the Persico 69F Cup in Porto Cervo, Sardinia, from the 5-10 July.

The team will take part in a three-day Academy preceding the regatta, where they will experience the intensive 69F training programme devised by world famous foiler and Olympic medallist, Santi Lange.

The Magenta Project team will then compete in the Persico 69F Cup 2:1 being hosted in Porto Cervo, Italy, an international Grand Prix made up of four events in different locations over a two-week period.

The Magenta Project is already familiar with the class, having run a specific camp on the 69F in June this year, with eight female sailors.

The four crew participating in the Cup, now in its second year, is led by Emily Nagel, a mentor for The Magenta Project and experienced round the world sailor and avid Moth sailor. Making up the crew are Finnish 49erfx sailor Mikaela Wulff, young Argentinian Nacra 17 sailor Eugenia Bosco, as well as Italian Maelle Frasceri who is a former Nacra World Champion.

Emily Nagel comments, “The whole team were super stoked to get out on the water today and get to grips with the new ‘toy’. We had a huge learning curve not only sailing together for the first time but also getting to grips with racing the boat. But one thing we already know is everyone is super competitive and keen to learn so we pushed hard on our first training day. Really excited for the rest of the week and to line up with some of the other teams. We clearly still have a lot to learn compared to the teams that raced last season but it’s a brilliant boat to sail and Porto Cervo has turned on the glamour conditions, hopefully there’s more of that to come! We are all hugely grateful to The Magenta Project and GAC Pindar for making this team possible. Top speed today of 21.4 kts, but I’m pretty sure we can beat that tomorrow!”

The Magenta Project’s Abby Ehler adds, “It’s great to see an all-female team competing in the world’s leading foiling Grand Prix, especially building off the success of our training camp last month. We are really happy to be racing competitively against some great teams and a huge debt of gratitude goes to GAC Pindar for supporting us to get on the start line.”