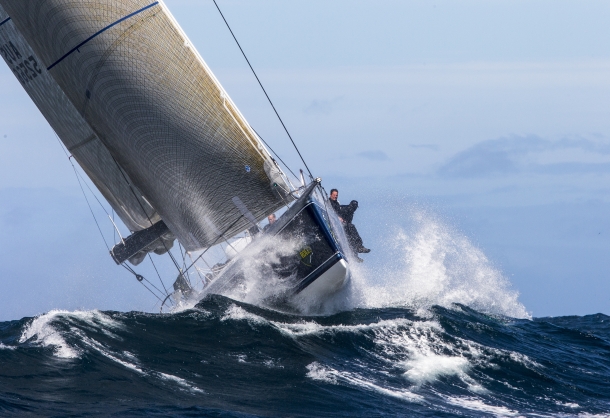 Tasmanian yacht Alive this morning smashed the race record for the 1885 nautical mile ocean race across the South Pacific from Melbourne to Port Vila, the port capital of the tropical islands of Vanuatu.

Owned by Phillip Turner and skippered by Duncan Hine, both members of Hobart’s Derwent Sailing Squadron, Alive crossed the finish line off Port Vila at 10:22:45am (Australian Eastern Standard time) for a record-breaking elapsed time of 5 days 23 hours 52 minutes and 45 seconds.

The Reichel/Pugh 66, which previously raced as Black Jack and was owned in Queensland, slashed the record of 7 days 17 hours 06 minutes and 00 seconds set by the Sydney yacht Andrew Short Marine, a Volvo 60, in the inaugural Melbourne to Vanuatu race in 2006.

Alive has enjoyed fast spinnaker running conditions since the start from Portsea, just inside Port Phillip Heads at 10.30am last Monday, a start that had been delayed by gale force westerly winds. Strong winds and ‘messy seas’ have caused two retirements from the small fleet.

With 40 miles to sail at 7.30am today Alive was clocking more than 15 knots still under spinnaker, but she slowed down to about 10 knots as she crossed the finish line inside Port Vila Harbour after making eight tacks over the final few miles.

Alive has blitzed the fleet all the way and when she finished, the Tasmanian yacht was 750 nautical miles ahead of the next yacht, Matthew Lawrence’s Bakewell-White Z39 Jazz Player-TPF from the Royal Melbourne Yacht Squadron, with another Victorian yacht, Cartouche, Steven Fahey’s Beneteau First 50 from Royal Brighton Yacht Club more than 125 miles further astern.

In addition to owner Turner and skipper Hine, Tasmanians in the crew of 13 were Simon Desmarchelier, Simon Webster and Stewart Gray, with other crew members from Queensland.

Alive has been unbeaten in offshore races since Turner, a Tasmanian businessman based in Thailand, bought the yacht earlier this year, including winning all handicap honours in the Brisbane to Gladstone Race at Easter.

Turner has sights on winning this year’s 70th Rolex Sydney Hobart Race with Alive, with the yacht’s next long race being the Sydney Gold Coast Race late this month, followed by Hamilton Island Race Week.