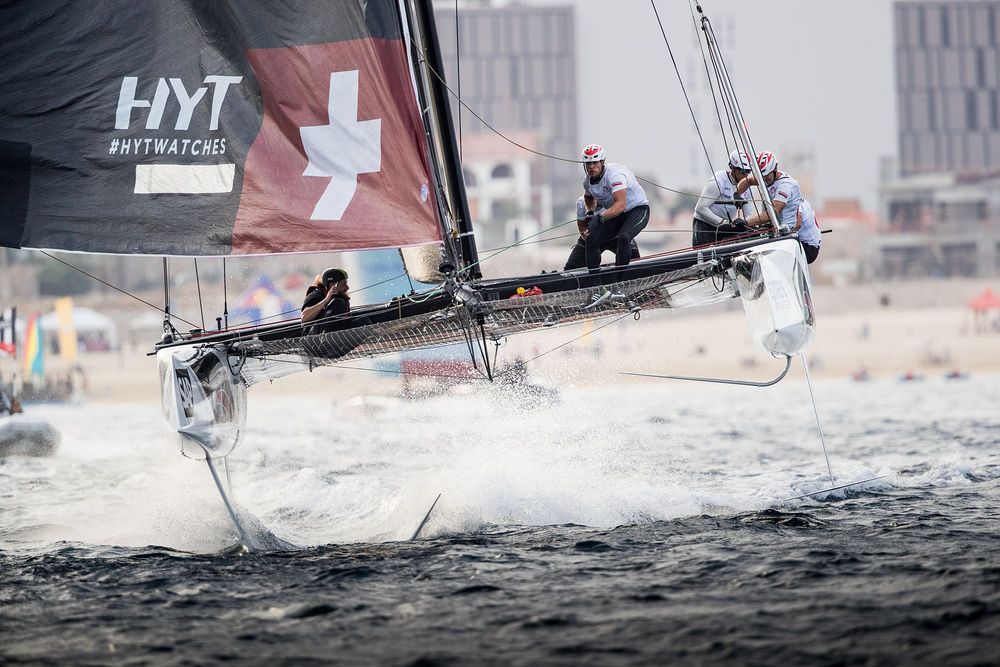 Alinghi stole the show for the second day running to extend its lead in the standings at Extreme Sailing Series Act 8, Los Cabos, presented by SAP, but crucially SAP Extreme Sailing Team retained the podium position that is the key to it taking the overall 2017 victory when the season draws to a close tomorrow.

While the battle for the Act and season glory raged between the three contenders, local wildcard Team Extreme México celebrated a moment of glory with a second-place finish, its first ever podium.

Aside from an uncharacteristic hiccup in the opening race, which saw SAP Extreme Sailing Team pull off a dramatic recovery from a disastrous start to bag a bullet and Alinghi end up at the back of the fleet, the Swiss managed to keep a clean scorecard.

“Our first race was very bad but that's where we turned the day around and went for straight wins, which was a great way to end the day,” said the helm of Swiss-flagged Alinghi, Arnaud Psarofaghis.

“We have a fight with SAP Extreme Sailing Team to win the season now. The first thing is to win this event but the most important thing to do is to go out there and enjoy the last day of racing of the year tomorrow,” added Psarofaghis.

Team Extreme México stole the limelight from the Swiss in race 16, closely following them across the line in second place to a standing ovation from the spectators on the shore. The feat is especially impressive considering the fact that the home-team competes this week as a freshly formed crew with just two days of practice. For several of the sailors this is their first time on the foiling GC32.

“Today was just amazing. We had a race where we finished second and it was a great fight with SAP Extreme Sailing Team around the course, so that made it even more fun,” said an ecstatic skipper, Erik Brockmann, whose team sits in seventh.

“We could hear the home crowds cheering. It was really nice to have the finish close to the shore. We came into the day really motivated to try and get some good races and I think the day went pretty well,” he added.

“It wasn't too bad a day. We stayed in a good place, kept Red Bull Sailing Team a good distance behind and kept Oman Air close, but unfortunately Alinghi got a little bit away on us and they have a 16-point lead,” said Minoprio.

“With potentially six more races tomorrow and double-points in the last race we can definitely close that gap up. Tomorrow is all to play for, for winning this event,” he added.

“We were going alright; the averages weren't too bad. We got a few keepers and had a not-so-good race but, other than that, not a bad day,” said skipper Phil Robertson. “It's all on tomorrow. The last day of the year and everyone's going to come out with gloves off. Alinghi seems to be sailing very well but hopefully they have a stinker.”

US-flagged Lupe Tortilla Demetrio, the second wildcard to compete in the Act, sits bottom of the table but skipper John Tomko is confident his team is taking steps forward.

“The weather has co-operated; it's a great venue with flat water and it's a lot of fun here,” said Tomko. “We have moments when we're in the pack and then in the next race we're at the back, so we're still trying to figure it out, but we're definitely getting better with the boat handling.”

Tomorrow marks the final day of the 2017 season on which both the double-points Act 8 winner and the overall champion will be decided.