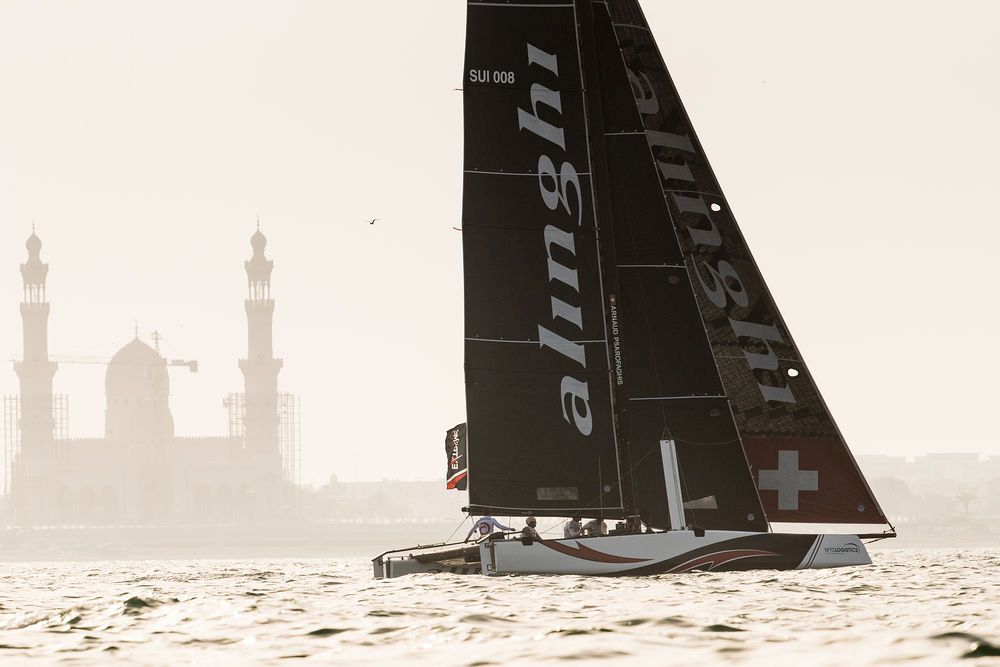 Three-time champions Alinghi dominated on the racetrack today, Wednesday 14th March, in the first day of the 2018 Extreme Sailing Series.

Having lost out to Danish syndicate SAP Extreme Sailing Team last year, the Swiss team ruled the waves from race one, determined to prove themselves straight off the start line.

Consistent sailing across four races saw the experienced Alinghi crew finish within the top two on each occasion. The team's helm – Arnaud Psarofaghis – explained that they set out to start the season as they mean to go on.

“Our goal this morning was to begin the season well. The fleet is really strong so every race is going to be important this year. We're going to talk about why we didn't win all of the races tonight,” he said with a broad smile.

Racing off the coast of Muscat, Oman, the fleet of high speed foiling GC32 catamarans navigated difficult conditions on the racecourse. Light, shifty winds made for tricky competition, with the second race of the day abandoned due to the weather.

Sailing on home waters, the conditions didn't faze Oman Air as they battled Alinghi for the top spot throughout the day. Leading the fleet for the first half of race one, the Omani team – consisting of seasoned Series professionals – made best use of their knowledge of the stunning waters off the Muscat coastline.

“It was great to be racing on home waters – we know them well,” said Omani sailor Nasser Al Mashari.”When the Omani crowds come out and watch us, it definitely makes us stronger. There's still three more days to go, we'll just keep pushing and pushing.”

Fighting to defend their 2017 title, SAP Extreme Sailing Team climbed the ranks with each race. Having started the first race with an OCS [over the starting line early], the team needed to make serious progress on the course in the remaining races. Leaning on their long Series experience, the Danish outfit scored a third place finish overall and the team is now hot on the heels of main opponent Alinghi.

“We got the OCS out of the way early. If you're not over the line at least once, you're never pushing the line hard enough,” explained helm Adam Minoprio. “It cost us a lot, but we were generally fighting in amongst the fleet. We've shown that we're in the mix, we're pushing hard and we're not holding back.”

With the wind expected to pick up as the week progresses, the competition looks set to heat up even more. GC32 racing continues tomorrow, Thursday 15th March at 14:00 local time (UTC+4). Will Alinghi assert their dominance on the racetrack once more? It's all eyes on them.

Over on the Flying Phantom racecourse, Team France Jeune topped the leaderboard, finishing in the top two in five out of six of their races. Antoine Rucard, crew for the team, commented on their victory: “We're in the lead after sailing in only six knots of wind. We've been strong on the first day and we'll be strong on the others.”

Racing is set to continue for the Flying Phantom teams from 10:00 local time (UTC+4) tomorrow.