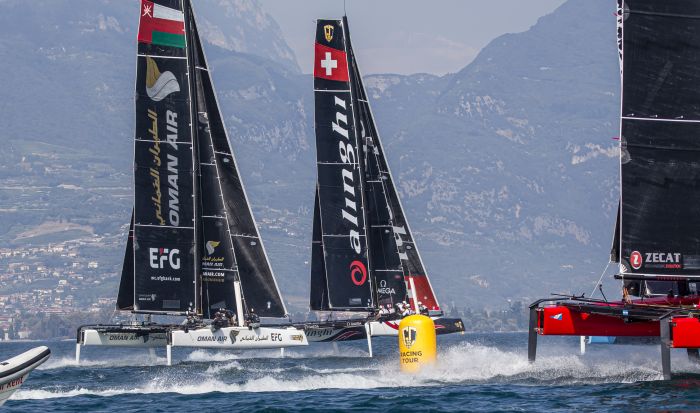 Alinghi versus Oman Air was the entire theme of the final day of the GC32 Riva Cup. Photo: Sailing Energy / GC32 Racing Tour

While Alinghi has led at the end of every day of racing at the 2019 GC32 Riva Cup, the Swiss team was on the ropes this afternoon when their arch-rivals Oman Air, in seemingly unbeatable form, scored three back-to-back wins levelling the scoreline with them.

As ever with the Dolomites forming the most spectacular of backdrops, racing today, hosted by the Fraglia Vela Riva, was held in a 14-16 knot Ora southerly.

In the fourth and penultimate race, the Omani team’s winning streak came to end, but it was not Alinghi but Red Bull Sailing Team that claimed the bullet. However in this Oman Air’s second to Alinghi’s fourth, handed the Omanis a slender two point lead going into the final race.

With Oman Air having had the upper hand all day, a chink finally appeared in their armour in the deciding race, allowing both Alinghi and Red Bull Sailing Team through. After a nailbiting final few minutes, where Oman Air desperately tried to catch up, these positions held at the finish line causing the two frontrunners to end the GC32 Riva Cup tied on points. Sadly for Oman Air after such a strong final day, GC32 Racing Tour tie breaks are decided on final race position, handing the GC32 Riva Cup to Alinghi.

This was the second win of the season for Ernesto Bertarelli’s team following their victory at the GC32 World Championship in Lagos, Portugal in June.

“Today we had really tight racing with Oman Air,” commented Alinghi helmsman Arnaud Psarofaghis. “They sailed really well and they put us in a bad situation, but we knew it wasn’t over until the last race when we got the better of them. They tried to be smarter, but they gybed too late and we could just overlap them on the downwind and pushed them back in the fleet. Then Red Bull did a good job to stay ahead of them.”

Oman Air’s skipper Adam Minoprio described the fateful moment: “Basically we lost the regatta at that first gybe – we just gave away ten lengths there. After that we needed another team to make a huge mistake and unfortunately for us Red Bull is a strong team and difficult to pass when you’re on layline to the top mark.”

In that race Oman Air once again had made a masterful start to leeward, gently luffing Alinghi out of their way to lead at the reaching mark. Then coming into the leeward gate Psarofaghis had managed to give Minoprio a dose of his own match racing medicine when he managed to shovel Oman Air out to the left.

Alinghi’s team manager Pierre-Yves Jorand observed: “Oman Air sailed very well especially today when they put a lot of pressure on us. On the reaching starts they have the edge, but our team sailed very well on the course, choosing the right gate marks, proper modes and managed to fight and to come back in several races. So congratulation to Oman but also to our team.” Alinghi didn’t start well in the first three races and on one occasion were even in last place but in all the races their recoveries were phenomenal.

Roman Hagara and Red Bull Sailing Team had a strong final day putting extra points between them and Erik Maris’ Zoulou, ensuring that they retained the final position on the podium. “We had some good racing, some tough fights with the others and we also got a race win and a couple of good places,” said Hagara. Even the race they won today, the Austrian team dropped off the foils on the run causing them to lose the lead, which they subsequently regained on the upwind. Otherwise Hagara very much enjoyed racing on Lake Garda, close to his native Austria. “It is a great lake and a great facility here. It is really good for GC32s to race here.”

Erik Maris’ Zoulou won the owner-drivers trophy. “We are pretty pleased with what we achieved,” said mainsheet trimmer Thierry Fouchier. “We got closer to Red Bull and managed to be in the middle of the pack with Red Bull, Oman Air and Alinghi. That was good for us. Red Bull did a good last day and sailed very well. Fortunately Erik is still happy.”

Jason Carroll’s Argo team from the USA scored two thirds place finishes but their consistency was inadequate to make an impression on Zoulou in the owner-driver ranking. Meanwhile ferocious fighting ahead of them ensured that Christian Zuerrer’s Black Star Sailing Team and Argentinean Federico Ferioli’s Codigo Rojo Racing had to make do with their own private competition.

The 2019 GC32 Racing Tour will conclude in Muscat, Oman over 5-9 November, where we can expect another sleeves-rolled-up fist fight between the circuit’s two heavyweights to determine who will be this year’s champion.