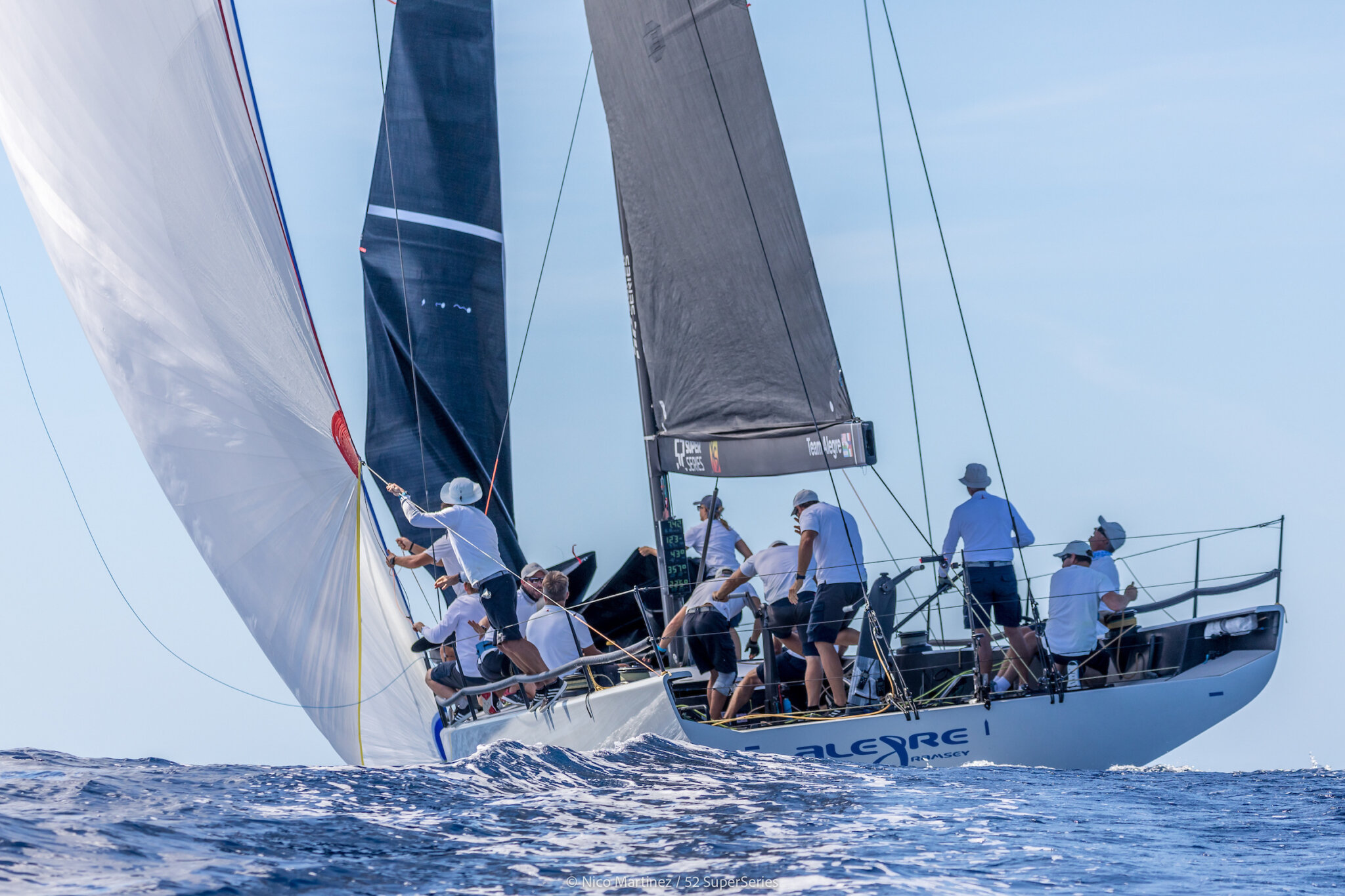 Alegre is winning the 52 Super Series after one race. Pic - Nico Martinez

Andy Soriano’s Alegre holds the lead after the first day of racing at the Menorca 52 Super Series Sailing Week, comfortably winning the only race which could be contested due to very light, shifty and unsettled northerly breezes which kept tacticians and strategists on their toes until the finish line.

Phoenix, the Plattner family’s South African flagged team, looked to be well set to duplicate Sunday’s practice race win when they made the best start and led at the top mark. But a consolidating, low risk move down the first run cost them the lead and they took third, also falling prey to an excellent recovery from Vladimir Liubomirov’s Bronenosec.

With Vasco Vascotto combining with Luna Rossa compatriot, 49er ace Pietro Sibello as strategist in an all-Italian afterguard, the blue hulled Bronenosec made good gains on the second beat when the wind shifted left and they chased Alegre across the finish line.

The Alegre team – which has owner Soriano steering and Ado Stead and Nic Asher as afterguard – were pleased with their day’s work. They were able to extend their lead to over 250 metres ahead of the second beat, but the changeable, shifting breeze made it difficult to keep control of the advances from all sides. Phoenix’s tactician Ed Baird explained their thinking, gybing earlier down the first run conceding the lead to rivals Alegre.

“On the run all the boats behind were bringing down pressure and cutting off our lane and if we could have kept going straight maybe we would have gotten out of there,” Baird said.

“ I have seen many times that the leader gets swallowed up and so I felt we just needed to get out when we could.

“ If you can finish in the top three or four over and over in this fleet you will win regattas and you are going to win the season. The goal is always to have your best finish but always remembering there is no drop race (no discards). What you don’t want is to go from first to sixth. We try to avoid that.”

Alegre took over the lead on the first run and were able to extend their margin up the second beat before the breeze shifted to the left. Tacking and staying right early on the second upwind offered a good gain but Bronenosec’s navigator Bruno Zirilli reported,

“The breeze was very shifty with big changes in pressure but I think we managed it very well. We lost a bit on the first windshift but made a magical recovery and I think we are happy. But tomorrow looks a windier day with big waves, already coming from the NE, I think it will be a great 15-20kts with good wind and waves.”

Winners of the World Championship here in 2016 Quantum Racing made a disappointing opening to their regatta. Over the start line early they were sandwiched momentarily between boats and it took time for them to be able to restart, they recovered two or three places in the middle of the race but found themselves on the wrong side of the bigger windshift and so start with an 11th.

Alegre’s bowman Matteo Aguadro, said, “That is a very nice way to start the regatta, probably the first time we are leading a regatta overnight and so it is happy days. It was a very different race course to the south, no one has tried it there so much, we had a good start and went from the right and did everything well.

“I was mostly downstairs inside to keep the weight low and when I came up we were second, so credit to Ado Stead and Nic Asher.”