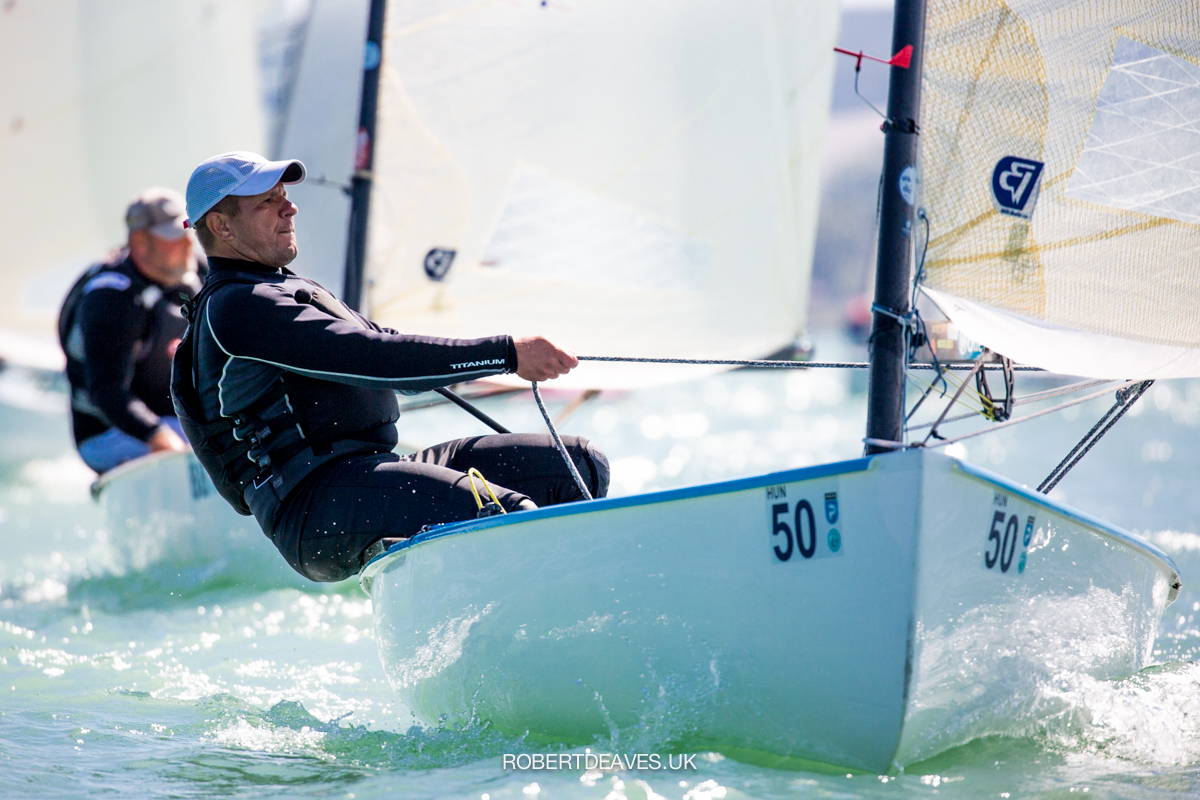 Akos Lukats has won the 2021 Finn European Masters at the Tihanyi Hajós Egylet in Tihany, Hungary after no more races were possible on the final day, with Bas De Waal (NED) and Taras Havrysh (UKR) placing second and third respectively.

The forecast for the day predicted very light winds and so it turned out. The light morning breeze slowly faded leaving a glassy lake and sweltering temperatures. With very little hope of a sailable wind in the afternoon, the plug was pulled at midday, so that packing could start.

t has been an eventful two weeks for Lukats, winning the Hungarian Nationals and the European Masters on Balaton back-to-back. He was struggling to come to terms with what he has achieved.

“I still need to digest this. I don’t know what’s happened. What is important I think is to really find out how I got here. What made it happen so I can learn from that for my future sailing, because I really never, ever anticipated or believed that I could achieve this,” Lukats said.

“Probably back in 1995, when I was sailing the Laser, I had this ambition, now I just sail for enjoyment.”

On the event: “I am a local guy, so I have to say this, but talking to all the guys here they all really enjoyed it. In any given week we were pretty lucky with the wind conditions to get seven good races, because the forecast was much worse. “Overall, I think it was a great event, and social events were extremely nice.

“What I enjoy most is this crowd here, the company of these great sailors and great people, and a lot of friends. And what overawes is how most of the sailors approached me and congratulated me. It’s so honest and I don’t even know how I deserve this nice reception from these guys.”

With 78 boats from 14 nations, this year’s Finn European Masters was the largest so far and hopefully will continue to play an important part in the future of the class.

The prizegiving was held on the lawn outside the idyllic location that is Tihanyi Hajós Egylet, which has been an exceptional host to this championship, the concept of which began here 12 years ago as the Masters Euro Cup. More than a decade on the event has matured and has returned to where it started.

The overall prizes were presented by Zsombor Berecz, the 2020 Olympic silver medalist from Tokyo, while the prizes for the five Legends taking part were presented by the 2021 U23 Finn World Champion Doma Nemeth, from the host club. International Finn Association President, Balazs Hajdu was also attending.

Next year’s Finn European Masters heads to Spain, while in just four week’s time, the Masters will also gather in Spain at the Finn World Masters on Mar Menor.