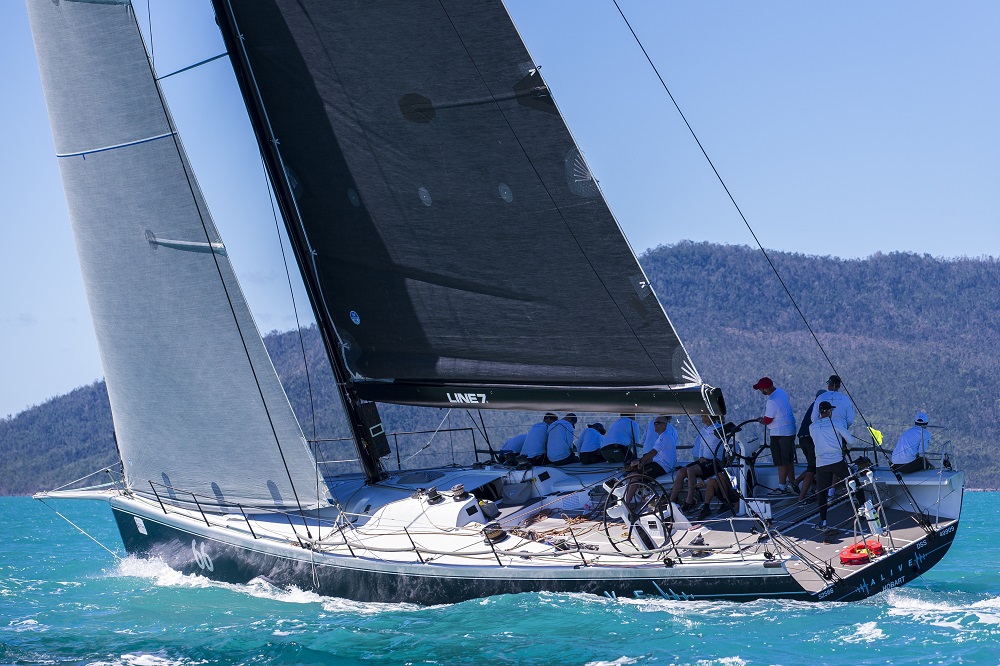 Day 3 at Airlie Beach Race Week Festival of Sailing hosted by Whitsunday Sailing Club and the breeze from the 11am start was at 13-16 knots, ideal for the 100 plus competitors who are also enjoying the tee-shirt conditions the venue offers.

However, the wind did not hold, dying down as the boats progressed through their courses during the day.

The Performance Division 2 boats today tried their luck in three windward/leeward races which sorted the chaff from the wheat. Todd Huggonson and Craig Humphries’ Conquistador, a Bethwaite 8 from Queensland, has taken the lead, adding 2-1-5 results to his scorecard.

Fellow Bethwaite design, Vivace, the 79er of Gary Smith and John Rae (Qld), is second, their 3-3-1 results leaving them three points off the money. Andrew York and his REO Speedwagon (NSW) are third, after finishing the day with 1-8-2.

Huggonson sails at the back end of the boat and Humphries is on bow, leaving helm duties on Conquistador to Sally Turner.

“We’re from the Gold Coast and we’ve raced here before. We expected Vivace and REO Speedwagon to be our strongest rivals, and they are – Andrew York (REO owner) is a very sharp sailor,” Humphries said.

In IRC Racing, Phil Turner’s RP66 Alive took the gun again, to finish third overall behind The Goat, Mitch Gordon’s Sydney 38 (NSW) which is proving hard to beat, but today she only got David Currie’s Ponyo (Vic) by five seconds.

Steven Proud’s Kernan 44, Swish (NSW), is the only boat to beat The Goat so far and is third placed overall in the series behind The Goat and Ponyo.

In fifth place and here for the first time is the West Australian TP52, M3, skippered by Brent Fowler.

“We’ve been sailing well, but we haven’t cracked it yet – our last two races we finished fourth. We came here short crew and the first day we picked up crew and eight haven’t sailed a boat of this size before,” Fowler said. “We’re having a lot of fun anyway.”

For the time being, M3 is calling Sydney home as Fowler prepares for the Rolex Sydney Hobart. They recently finished fourth overall and won Division 1 in the Sydney Gold Coast race and continued on here to Airlie Beach Race Week.

The Cruising Division 1 boats are as driven as ever and the likes of Condor and Hammer, from a bygone era when they were the latest and greatest, still have what it takes, not afraid to get amongst in the tight mark roundings. Cruising be damned!

But it’s another famous name, Helsal 3, which is leading the division with her crew of mainly year 5 medical students that leads the pack, one point ahead of both Guilty Pleasures VI (Gary Cripps, Tas) and Eureka II (Mal Robertson, Qld).

The 10 Trailable Yacht entries are also not afraid to get amongst it. The division is currently led by Luke Mairs’ locals on Sticky Fingers, which won today’s race adding to its earlier third place and win and giving it a five-point advantage over Goggles Ruckert’s Mr Magoo with a further point to Derek Foley’s Wicked – which amounts to an all Queensland showdown.

Tomorrow is lay day, allowing competitors to kick back to the sounds of the Cadillacs playing all your favourites from the fifties and sixties this evening following the nightly prize presentation.