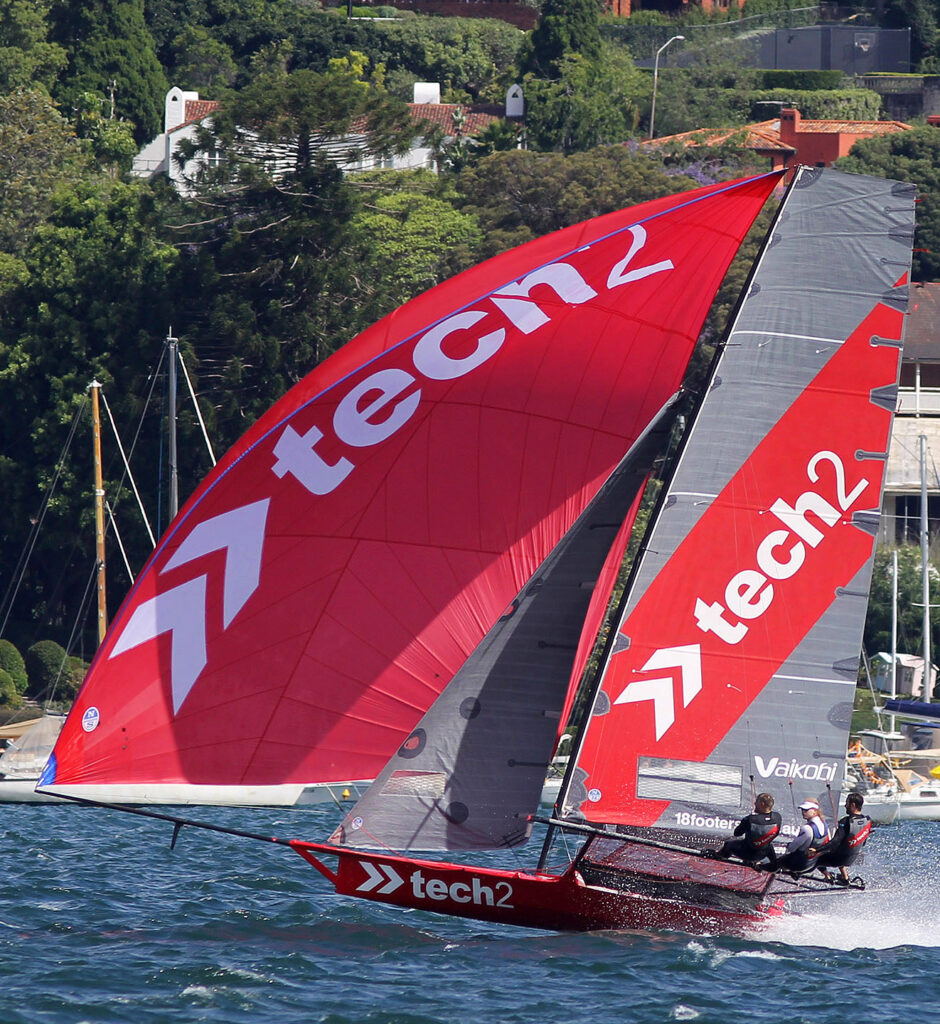 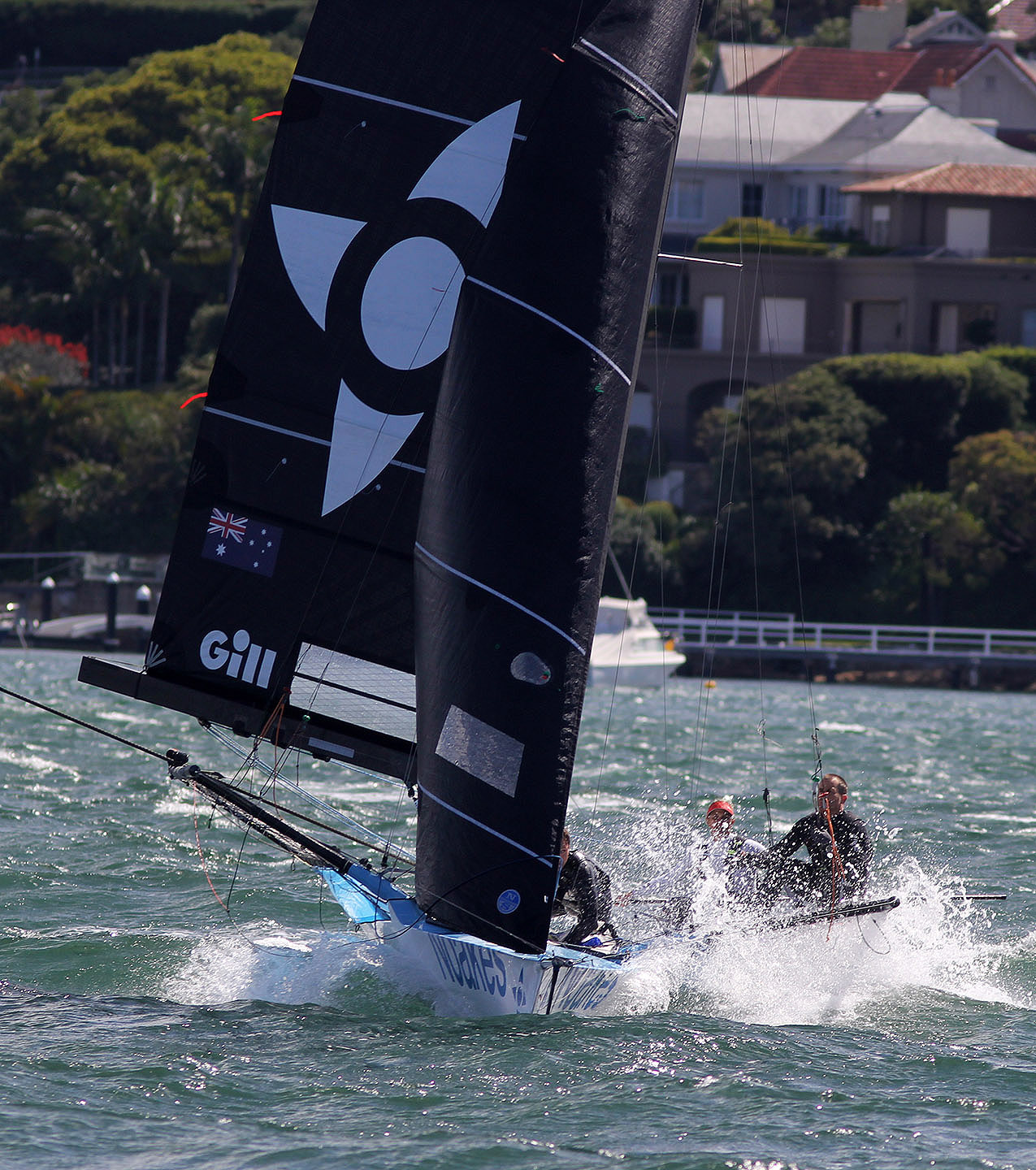 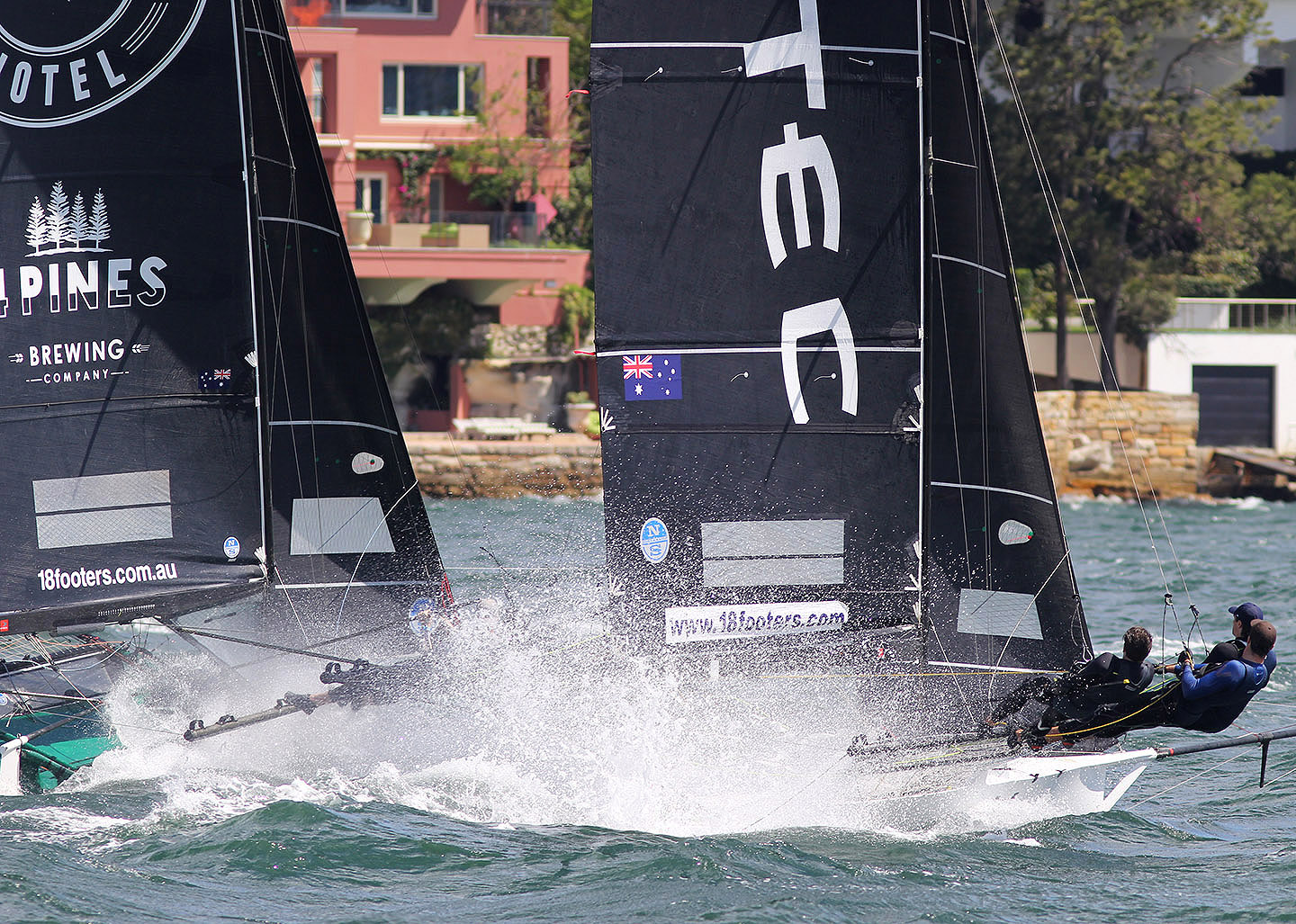 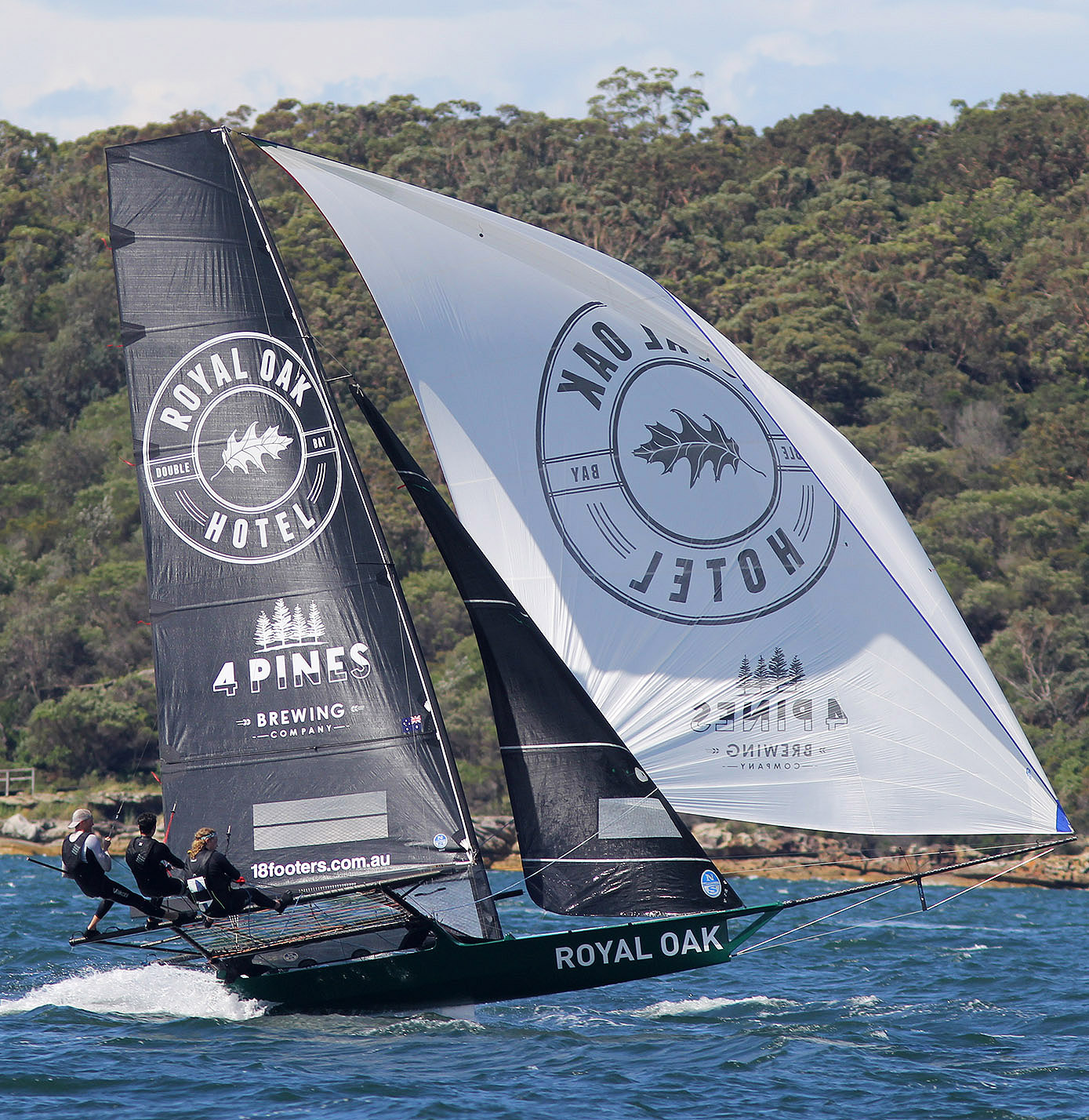 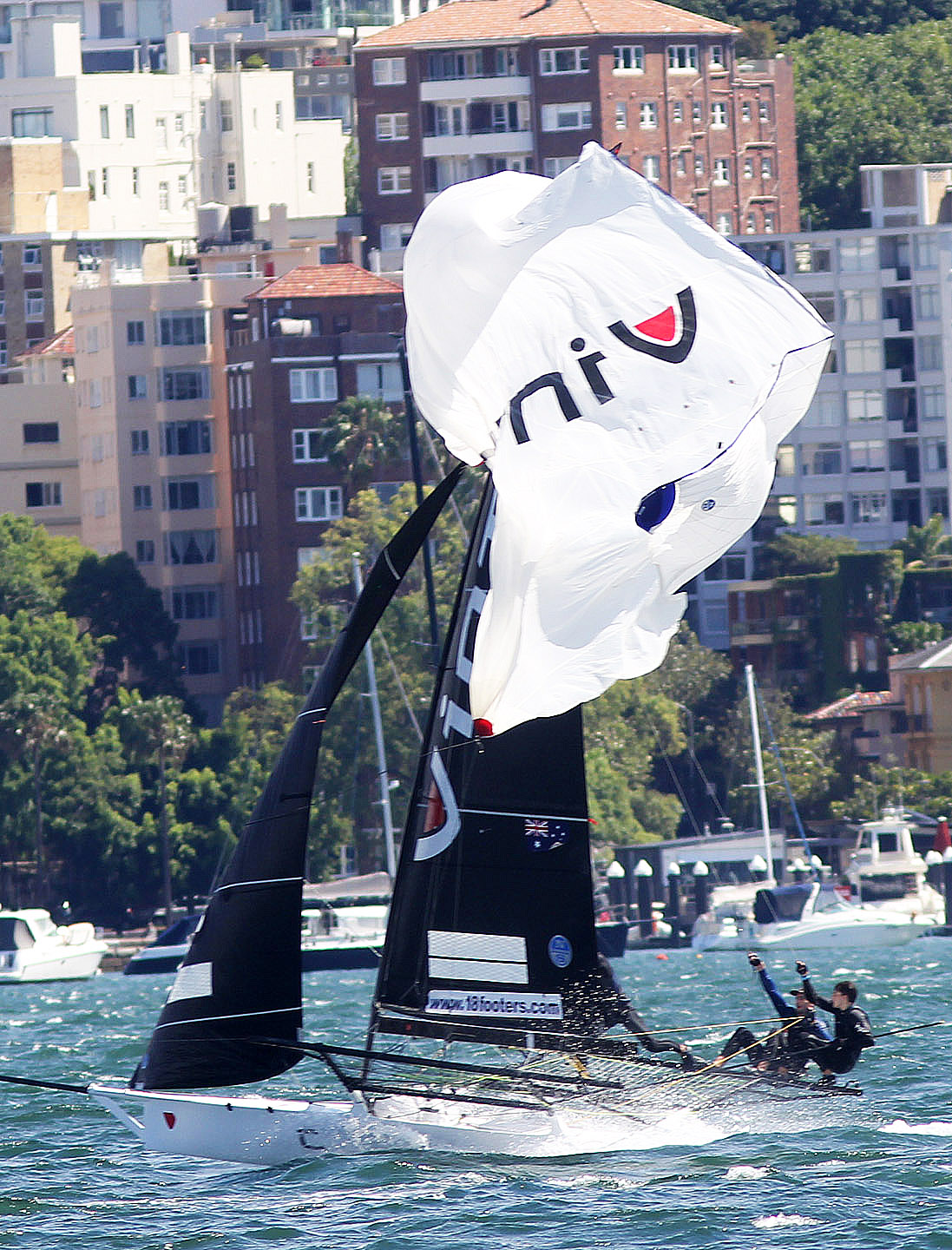 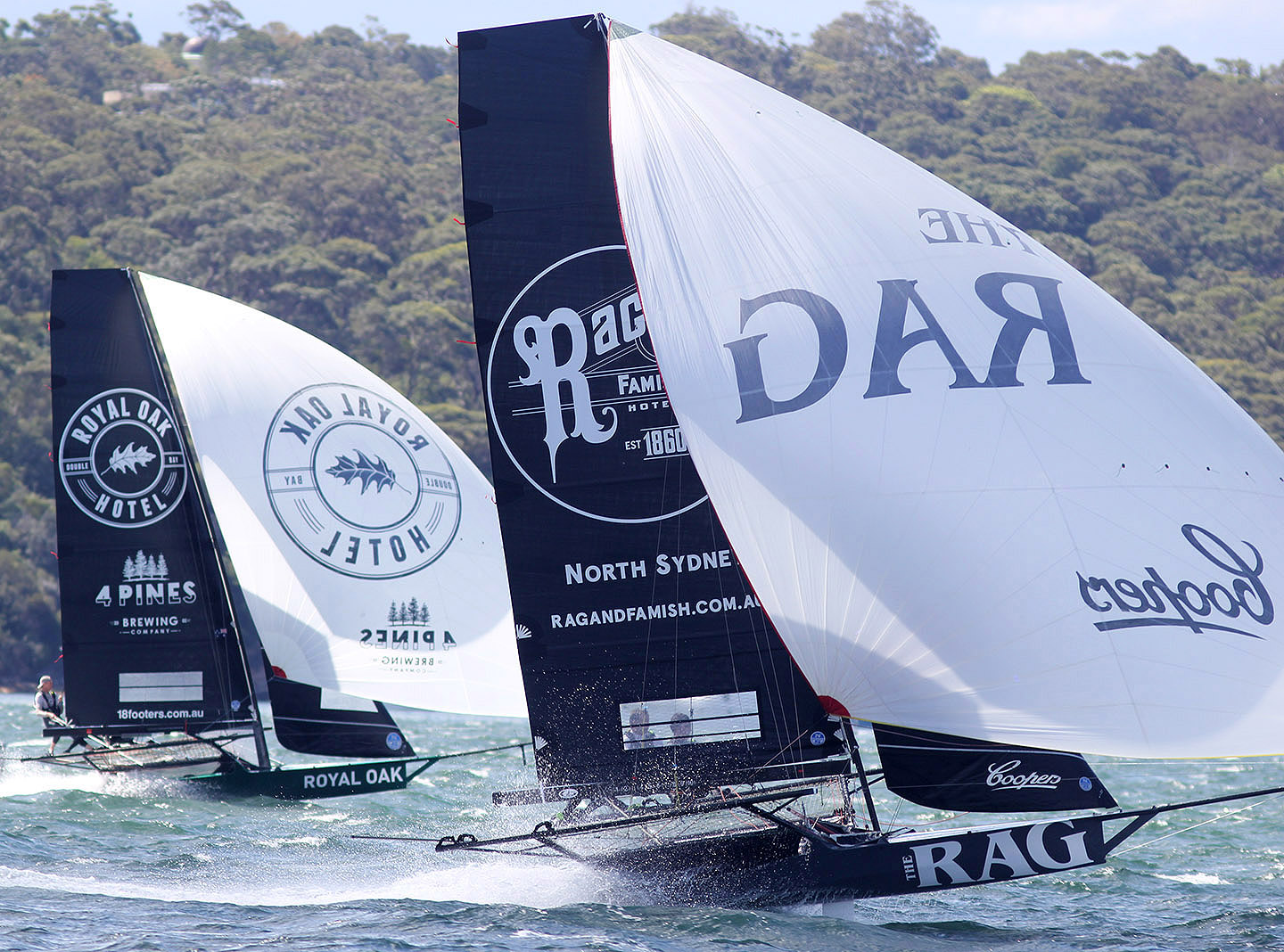 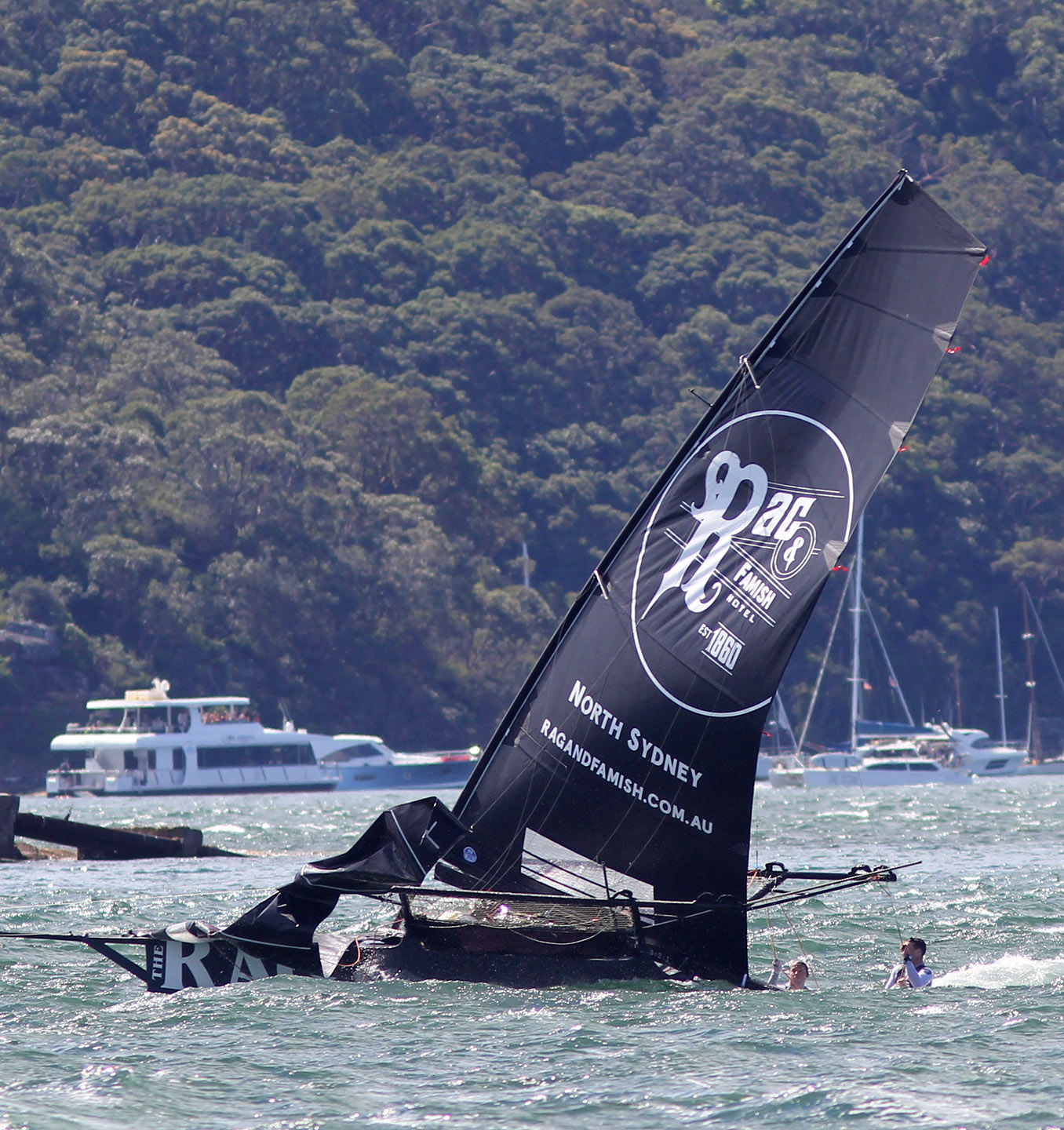 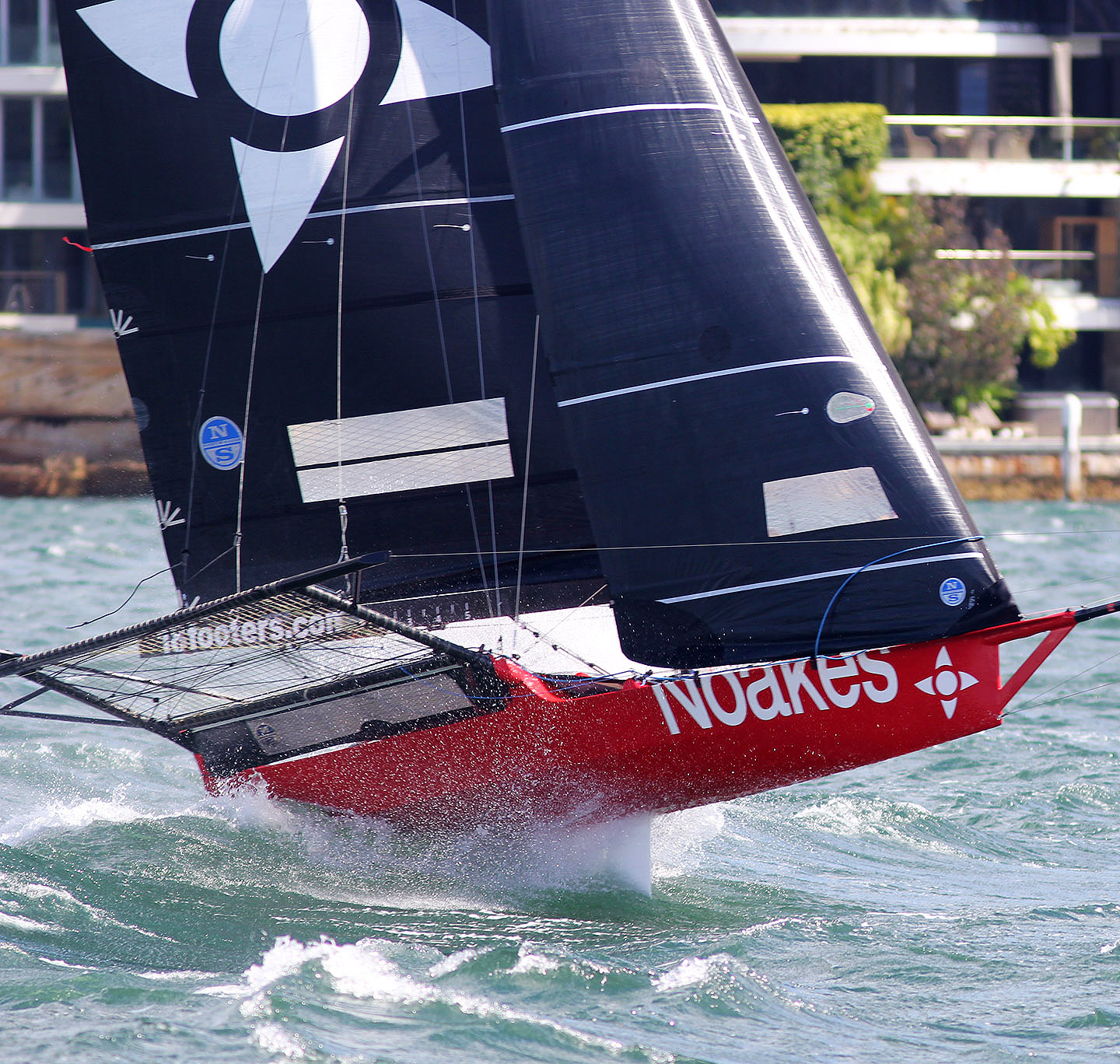 The Tech2 team of Jack Macartney, Charlie Wyatt and Lewis Brake survived a wild day of high winds and a late race capsize to win Race 6 (the final race) of the 2021 Spring Championship, when the 18 footers returned to their traditional style of handicap racing for the first time in decades on Sydney Harbour today.

After nearly one and a quarter hours of battling the strong winds, Tech2 finally crossed the finish line 4 minutes 15 seconds ahead of Yandoo (John Winning, Fang Warren and Mike Kennedy), with The Oak Double Bay-4 Pines (Aron Everett, John Cooley and Charlie Gundy) a further 2 minutes 34 seconds back in third place.

The only other boat to complete the westerly course was Fisher & Paykel, with Jordan Girdis, Nathan Edwards and Kurt Fatouros on board.

Though they didn’t complete the course, special mention is deserved for Burrawang-Young Henrys (Simon Nearn), Noakes Blue (Yvette Heritage), Rag & Famish Hotel (Harry Price), The Kitchen Maker-Caesarstone (Lachlan Steel) and Noakes Youth (Tom Cunich), which all sailed near the head of the fleet before falling in the face of the conditions.

Today’s third placing was enough to give the consistent The Oak Double Bay-4 Pines victory in the championship with a final total of 22 points, followed by Yandoo on 28 points, Fisher & Paykel on 29, Tech2 34, Rag & Famish Hotel 35 and Balmain Slake (Henry Larkings) on 38.

Following the Covid-related forced delay to the start of the season, and some poor wind conditions during the earlier part of the series, officials decided to return to the traditions set by the class founder, Mark Foy, in 1892.

Today’s conditions, however, were a huge test for both the competing teams and the system as the westerly winds battered the fleet on a nearly deserted Sydney Harbour.

Burrawang-Young Henrys took the lead shortly after the start near Shark Island as the fleet set off for the top mark off Kurraba Point, but it was The Kitchen Maker-Caesarstone which led the fleet under spinnaker on the leg across the harbour to the wing mark off Clark Island.

As teams fell foul of the wind and the seas, the lead changed a number of times on the following leg between Clark and Shark Islands as the fleet headed back to the bottom mark in Rose Bay.

The Australian champion Tech2 team took control over the next lap of the course and gave a wonderful exhibition of sailing as the skiff opened up a sizeable lead over her challengers.

At the final rounding mark on the third lap of the course, Tech2 set off for home with her red spinnaker driving the boat at top speed across the harbour and an easy victory in sight, before a spectacular capsize put the win in doubt.

As the Tech2 crew struggled to get their skiff upright, Yandoo was coming fast, but the Tech2 team recovered to take out a well-deserved victory.

Race 1 of the NSW Championship will be conducted next Sunday.

Spectators can follow the racing on board the club’s spectator ferry, however due to the COVID-19 policy, numbers are limited.  Booking online through the club’s website is essential. See: http://www.18footers.com.au/18-footers-sailing/spectator-ferry/