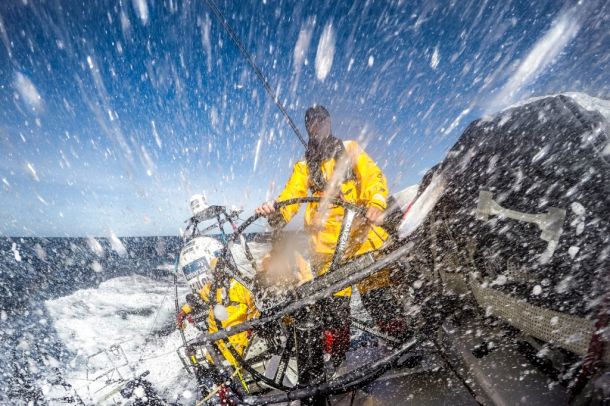 ALICANTE, Spain, April 1 – Abu Dhabi Ocean Racing (Ian Walker/GBR) continued to power towards Itajaí at the head of the fleet on Wednesday with the possibility of extending their overall Volvo Ocean Race lead tantalisingly within their reach.

Walker said pre-race that consistent podium finishes could well be enough to win the event given the potential for major problems all the boats face. That strategy looked better than ever early on Wednesday after the news late the night before that his closest rivals, Dongfeng Race Team (Charles Caudrelier/FRA), were being forced to abandon Leg 5 after suffering a broken mast.

There is still a long way to go until Abu Dhabi Ocean Racing themselves are safely in port in south-eastern Brazil, but the eight points that the Chinese boat will receive for not finishing the 6,776-nautical mile stage is a major setback to their title hopes. Victory in Itajaí would open up a seven-point lead for the Emirati crew over Dongfeng Race Team.

Meantime, Team SCA (Sam Davies/GBR) were approaching Cape Horn around 1200 UTC after trailing the fleet following a series of setbacks including a Chinese gybe which damaged their key fractional code zero sail. It has been a long journey from Auckland and navigator Libby Greenhalgh (GBR) summed up: “Challenging is definitely a word I would use to describe this leg and in many different ways not just because of circumstance and venue.

“I sit at the Nav station with a quote from our dearly missed (coach) Magnus Olsson as we approach one of his favourite places and gradually understand what he meant. ’I have a love hate relationship with the Southern Ocean. You love it because it's so thrilling but at the same time you have an enormous respect for it – you have to, otherwise you wouldn't survive’.”

These are words that the luckless Caudrelier would certainly echo as he made plans for the quickest departure possible, under motor, to Itajaí from Ushuaia, Argentina, where their stricken boat is currently based.

“If we want to be ready, we have to leave Ushuaia as soon as possible, go straight to Itajaí, use the engine and the small sails we can use. It’s a challenge against time. We need to be there one week before the start of Leg 6 to be ready to start. We are 2000 miles from Itajaí. We need, for me, 10 to 12 days. We are running out of time.”

He explained his decision to quit the leg rather than try to complete it. “If we decided to finish Leg 5 we would be last for sure, so we would have received six points. By retiring, we received eight points. It’s only two points difference but that’s quite big when you think about the overall ranking. But if we did that we are not sure to be ready for the next leg and we’ll lose another seven or eight points if we don’t do the next leg. We need to focus 100% on performance in the next leg, and this is our goal.”

The first four of the remaining racing fleet is expected to arrive in Itajaí around April 5-6 with Team SCA completing this most gruelling stage two or three days later.