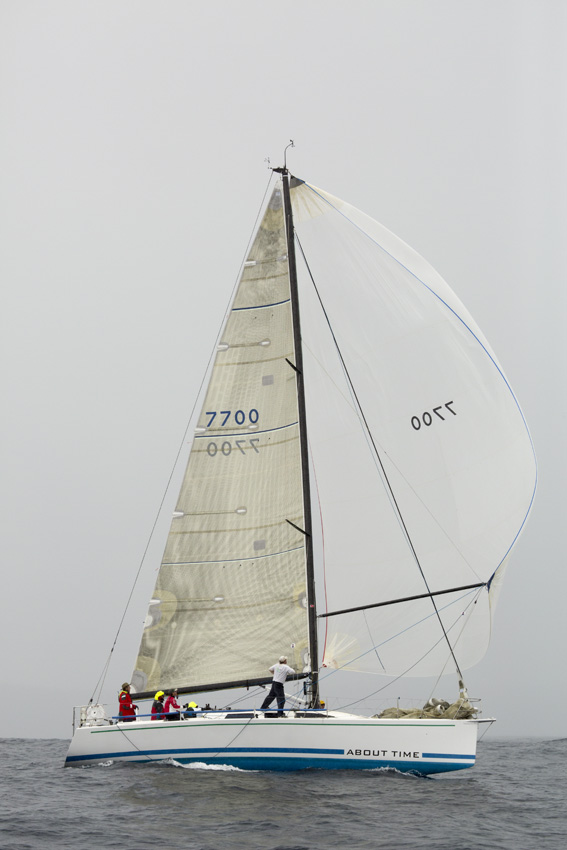 Julian Farren-Price and his About Time crew persevered to win an agonizingly slow game of patience in Race 6 of the Cruising Yacht Club of Australia’s (CYCA) Ocean Point Score (OPS), the Port Hacking Race today.

On being told he had won tonight, the Sydney jeweller said: “That’s gold. What a long day at the pit!”

“The upshot of the race is it was very long. The start wasn’t what was forecast – a south-easterly of 5 knots. Then we had a glass out. But we got a very good start and I think we were second out of the Harbour behind Balance,” Farren- Price said.

“Eventually the breeze swung north-east and it was due north at times, but we were doing really well and ahead of Balance, our main concern, on handicap.

“It was a beautiful sail from Port Hacking. Nice smooth flat water and 9-10 knot most the way home. Our only concern was Balance, as we had to tack the whole way back to the Harbour and Balance straight-lined it (to take line honours), so I thought we had lost all of our advantage,” About Time’s surprised owner said.

His concern was understandable, as going into the race, About Time led the pointscore by two points to Balance. Now Farren-Price has increased the lead.

Farren-Price, who also won ORCi overall from Steven Proud’s Kernan 44 Swish and Sebastian Bohm/Bruce Foye’s Rogers 46, The Goat, said it was ironic that About Time’s best boat speed was “9 knots as we crossed the finish line.”

“Once again, my crew did a wonderful job. They know the boat so well and kept it sailing through the whole race.”

Steve Kidson, Principal Race Officer for the CYCA, admitted having to delay the scheduled 10am start due to the light patchy conditions.

“We eventually got the yachts off at 10.35am in a 5 knot easterly,” Kidson said. “Even so, there was a parking lot at Nielsen Park, and a small group, including Reve, Wax Lyrical, Chancellor, Amante, Esprit and Into the Mystic were still in the Harbour two hours into the race.” The group, barring Into the Mystic, subsequently retired and it was a longer day than anticipated for the remainder.

An extremely light easterly with glimmers of north under a hot summer sun tested the entire fleet.  Balance and Swish led the pack south and it was Paul Clitheroe’s TP52, Balance, under the guidance of Mike Green, which took line honours at 5.47pm, having not rounded the Port Hacking mark until around 3pm.

Swish, was next over the line a short time later in a building north-easter, a relief for the yachts, which were able to sail home under spinnaker faster than initially expected.

While the race was slow, Kidson and his crew were kept busy standing by a motor cruiser whose engine room was on fire off Sydney Heads around lunch time. “We made contact with them and stood by and kept Sydney Ports advised,” he said.

The next race in the Ocean Pointscore Series is the Sydney Newcastle race starting at 9am on 18 February.

For full race results and provisional Ocean Point Score standings log on to: