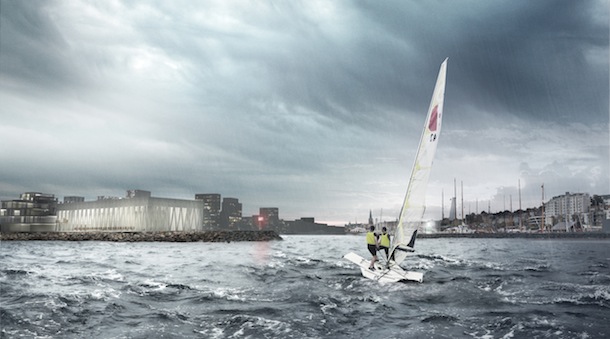 “This is a huge event, and it will leave its mark on the city and the bay. Once again, the Sailing World Championships place Aarhus and Denmark among the best event sites. The many participants and travelling companions will create life and atmosphere in the city and on the water, and it will be a unique experience for the city's citizens and the many visitors,” said Mayor Jacob Bundsgaard and Councillor for Culture and Citizen Service, Rabih Azad-Ahmad, who have signed the contract together on behalf of the Danish organisers.

The 2018 ISAF Sailing World Championships are organised in collaboration between the International Sailing Federation, ISAF, Dansk Sejlunion, Sailing Aarhus, Sport Event Denmark and the City of Aarhus. The parties share a joint ambition about ensuring that the event becomes the biggest World Championships ever for Olympic boat classes.

ISAF President Carlo Croce said, “The ISAF Sailing World Championships is one of our pinnacle events and it's very complicated to run, you cannot do it by yourself. The Danish organisers are highly competent and the team convey the feeling that they are a strong, united group. The legacy of sailing in Aarhus is fantastic and there is a great opportunity ahead. We are very happy to be taking the event to Aarhus in 2018.

“ISAF is looking for universality and having 100 nations and upwards of 1,600 sailors competing on the Bay of Aarhus in 2018 will be amazing for the sport.”

Lars Lundov, Director at Sport Event Denmark, adds, “The World Championships for all Olympic boat classes will head towards Denmark in 2018, and we have set all sails even now together with Aarhus and Dansk Sejlunion in order to establish new standards for the event”.

The ISAF Sailing World Championships are held every four years, and without comparison, they are the largest event that has the participation of all 10 Olympic boat classes. The distribution of national places in the Olympic Games will start on the Bay of Aarhus. This is where the dream about Olympic medals in Tokyo in 2020 begins for the greatest stars in sailing. As something completely new, kitesurfing has also been added to the World Championships programme.

For decades, Denmark has been among the best sailing nations in the world. A large number of World Championship and Olympic medals won over the years speak of sailing as a sport in which Danish sailors repeatedly manage to deliver top performances when it matters most. It is therefore only natural that Danish sailors look forward to competing in their home territory.

“The ISAF Sailing World Championships will make Aarhus an international brand in sailing once and for all. From the moment the Olympic flame is extinguished in Rio in 2016, every sailing nation in the world will start focusing on Aarhus. Over the next two years, a steady and ever increasing stream of sailors and coaches will visit Aarhus to get to know the World Championship waters. However, nobody knows the Bay of Aarhus better than the Danish sailors, and we look forward to demonstrating our skills to a home audience,” says Hans Natorp, Chairman of Dansk Sejlunion.

In Santander, 1,167 sailors from 82 nations took part. The area for the sailing finals was visited by 285,000 people, and the event was covered by 196 journalists. The local authorities assess that the financial effect of the World Championships amounted to approx.37.18 million Euros.

“The 2018 World Championships are a clear victory for sailing on the Bay of Aarhus. The event will place Aarhus on the 'world sailing map' once and for all, and Sailing Aarhus is ready with a strong and experi-enced crew,” says Mette Rostgaard Evald, Chairman of Sailing Aarhus.

About the ISAF Worlds

The ISAF Sailing World Championships is the principal qualification event for the Olympic Sailing Competition.

The largest congregation of Olympic sailors converged on Cadiz in southwest Spain for the first ISAF World Championships from 11-24 September 2003.

From 28 June-13 July 2007, Cascais, Portugal hosted the second edition of the ISAF Sailing World Championships. Building on the success of Cadiz four years earlier, 1,350 sailors and 900 boats represented 76 nations in the biggest Olympic sailing event yet.

Perth, Australia hosted the third ISAF Worlds in December 2011. 1,200 sailors from 79 nations took part, racing for world championship glory and Olympic qualification. As the principal qualification event for the London 2012 Olympic Games, 75% of all national places were decided.

Aarhus is a lively and young city bustling with energy and innovation as well as a sense of history. A rich and multifaceted cultural life flourishes with small, experimental theatre groups, art galleries, offbeat shops and trendy cafes. The scale of the city makes it easy and quick to get around and the atmosphere will make you feel welcome.

The Competition Venue will be established at the existing Aarhus Yachting Harbour and at the neighbouring city quarter, Aarhus ø. Aarhus Yachting Harbour is an extensive recreational area which is home to numerous leisure organisations, with diving, rowing, kayaking, yachting and motorboat clubs as well as angling associations. The Harbour is ideally situated within easy walking distance of downtown Aarhus and has several thousand daily users.

The harbour is also a favourite leisure destination for many Aarhus citizens, who enjoy the restaurants and shops or simply the atmosphere, natural setting, clean bathing waters, fishing and the fresh air.