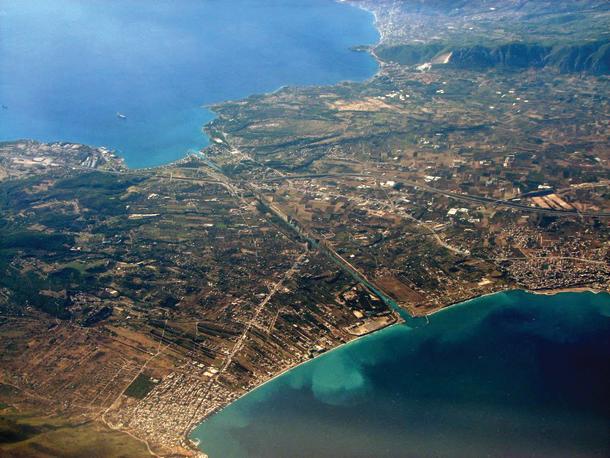 The brightening dawn spread pink-tinged fingers in the Easter sky, throwing the mountains of mainland Greece into violet silhouette: leaving the crags, cliffs and defiles etched in darker hues. The brilliance of the coming sunrise gathered momentum as its gold-stitched brightness cascaded toward the shoreline.

Suddenly, the contrasts of the wide-stretched landscape appeared more cleanly drawn; the deep valleys and sharp ravines now washed in blue-grey shadows. The light, ever more brazen, rushed on: purples and greens took hold and as we watched, the sea, spread before the lightening outline of the mountains, gleamed like a sheet of burnished gold.

A few seconds passed: was it only a few seconds? Then the blazing orb of Helios burst forth. Shafts of light flooded down the ragged ravines to pick out lonely houses nestling in the pines and olive trees; while, dark-shadowed in the warming air, an eagle soared imperiously overhead.

A primal dawn, a dawn for gods and men. It found us in the Gulf of Corinth where our old boat moved slowly on an idle sea. The western entrance to the Corinth Canal lay about five nautical miles ahead.

The Corinth Canal was opened in 1893, cutting short the passage of shipping between the Ionian and Aegean Seas.

The alternative route, around the southern Peloponnesus in ancient times, was often a voyage fraught with danger. Cape Malea (Maleas), Homer’s Cape of Storms, has always had an evil reputation: it was off the cape that Ulysses’ ships, returning to the Ionian island Ithaka after Agamemnon’s capture of Troy, were driven south-west to the Land of the Lotus Eaters, the Tunisian island of Djerba. Thus beginning his Odyssey.

As Ulysses relates: ‘I might have made it safely home that time, but as I came round Malea the current took me out to sea and from the north a fresh gale drove me on, past Kythera. Nine days I drifted on the teeming sea before dangerously high winds. On the tenth we came to the coastline of The Lotus Eaters, who live upon that flower.’ From Robert Fitzgerald’s translation of The Odyssey.

Strange to think if there had been a canal at Corinth in those days Homer would probably never have written the epic.

The Gulf of Corinth itself, however, can be a tricky stretch of water. The wind usually blows along the gulf from east to west and, in the summer, violent gusts (‘falling winds’) that you will hear and see approaching on the surface of the water, can sweep down from the mountains on the northern mainland or from the Peloponnesus.

These gusts can catch the unwary with too much sail to handle; with very strong winds the waves in the gulf are short, steep and very uncomfortable.

The ancient city of Corinth first tackled the idea of a passage between the Ionian and Aegean seas by building the Diolkos: a paved road across the narrow neck of land separating them. Ships were hauled on rollers from one gulf to the other.

Dragging the ships along that road was a difficult and labour-intensive task and Periander, the ‘Tyrant of Corinth’ and one of the Seven Sages of Antiquity, came up with the first-known scheme to dig a canal through the isthmus.

In 602BC he consulted Pythia, the priestess of the Delphic Oracle, asking her advice about the project. She was quick, however, to put him off the idea as, for her, it was probably a matter of economics: she would have been well aware of the vested interests of the profusion of temples in and around the city of Corinth, all profiting from the rich gifts and dedications given by the ‘god-fearing’ crowds obliged to stay in that great metropolis while waiting for their ships to be dragged over the Diolkos.

Three centuries later, in 307BC, Demitrios Poliorketes was the first person to start work on a canal. Egyptian engineers, however, soon convinced him that he should stop work. They believed the difference in the sea levels of the two gulfs would result in water rushing east through the canal from the Gulf of Corinth and flooding Aegina and nearby islands in the Saronic Gulf.

When Rome bestrode the Mediterranean, both Julius Caesar and Caligula had plans drawn to dig through the isthmus, but Nero was the first emperor to start work. In AD66 he set teams of prisoners-of-war from the Aegean islands, together with six thousand Jewish slaves, digging from west to east.

Pausanias, the Greek geographer and traveller of the second century AD, tells us in his description of Greece that Nero turned up in person, ‘lifting the first clod with a golden shovel.’ The Galba mutiny, however, then sent Nero rushing back to Rome, where he was arrested and charged with treason. He was sentenced to death and the canal project was abandoned.

Herod of Aticus, the Byzantines and the Venetians, all made further half-hearted attempts to take up the work where Nero left off. But it was not until the Hellenic state gained independence from the Turks in 1839 that the Greeks themselves were again able to consider the practicality of the task. Even so, nothing came of their plans until after the opening
of the Suez Canal in 1869.

Only then, fired with enthusiasm for ‘The opening of the Isthmus of Corinth’, was the task given to the French contractors, E. Piat and M. Chollett; but still nothing happened.

In 1881, Stefan Tyrr, a Hungarian general who was at one time aide-de-camp to King Victor Emmanuel of Italy, formed The International Company of the Canal of Corinth and took over the project’s administration. Work began on 23 April 1882 and King George I of Greece did the honours at the official ‘ground-breaking’ ceremony.

Ironically, the company made use of the two sections of Nero’s excavations at the western side to the isthmus: one of roughly 2012 metres and another of 1637 metres in length, plus each about 82 metres wide. All-in-all some twelve million cubic metres of rock and earth had to be removed from the cut and it took twelve years to complete the canal.

The canal is 6.3 kilometres long, 24.6 metres wide at sea level and between 7.5 and 8 metres deep. The current in the canal runs according to the wind direction and runs at one to three knots.

The canal is cut through soft limestone and the sides crumble easily and fall into the waterway. In 1940 it had been closed for a total of four years, just to clear it of landfalls. Until that time the worst incident was in 1923 when 41,000 cubic metres of debris collapsed down the sides to block the waterway. It took two years to clear that one fall.

In 1944, however, the retreating German Army was responsible for the worst damage ever suffered by the canal. The Germans set explosives that brought down 60,000 cubic metres of rock and earth and, just to make matters worse, they also sank railroad cars into it. It was five years before the canal was repaired and cleared for traffic.

Road and rail bridges cross the canal near its highest point and the almost sheer sides of the canal rising to some 76 metres, make for a spectacular passage. Just as well, for when I first took Laranda through the canal in 1988, it was, kilometre for kilometre, reckoned to be the most expensive waterway in the world.

Many yachts enter the Gulf of Corinth to visit the site of Delphi on the upper slopes of Mount Parnassus, while their crews almost invariably choose Galaxhidi as the port in which to leave their yachts while they travel by bus or taxi to the site. Galaxhidi is famous for building some of the finest trading vessels of ancient Greece and has a representative museum illustrating its ship-building history. Apart from being a picturesque and popular town with the Greeks, it is also a good and safe port under all conditions.

The modern town of Corinth is nondescript and uninteresting, but the ruins of the ancient city are another matter altogether. If you climb the heights of Acro-Corinth you can look down on that neck of land that Mary Renault describes so vividly in ‘The last of the wine’, as the Athenian athletes Alexias and Lysis, stand watching Spartan ships being dragged across the Diolkos: ‘There was a track drawn across the isthmus, as thin to our eyes as the scratch of a child’s stick. Along it the ships were creeping with movement scarcely to be seen. Around each prow was a swarm as fine as dust, of seamen and hauliers dragging on the ropes, or going before with rollers. We counted four on the shipway and eight in the Gulf of Corinth, waiting their turn. They were moving from the western to the eastern sea.’

Once through the canal and sailing east, the first port of call for yachts is often Epidavros on the southern shore of the Saronic Gulf: the ruins of its great theatre are amongst the most evocative in all Greece.

For the crews of visiting yachts, the Corinth Canal puts three sites: Delphi, Corinth and Epidavros, not to mention Aegina, Athens, and the Temple of Poseidon on Cape Sounion, within easy reach of each other. It connects the Ionian Sea, the home waters of Ulysses, with the sun-drenched and often wind-blown islands of the Aegean.

Few can resist the lure of the Greek islands. Many of us sail those waters simply to experience, no matter how distantly and vicariously, something of the romance of ancient Greece. Perhaps we hope to be one of those for whom, as Flaubert wrote: ‘Among those airs your spirit will grow wings.’ ≈