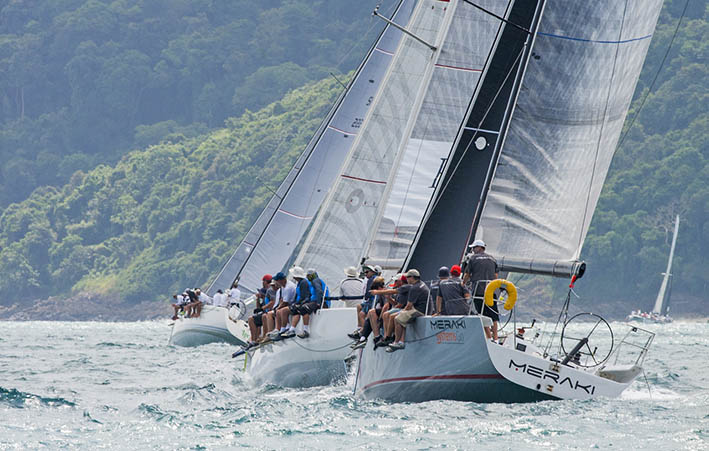 Racing was close on Day 1 of the 2017 Cape Panwa Hotel Phuket Raceweek. Photo by Guy Nowell.

PHUKET, Thailand – The winds arrived on cue as a fresh 10-15 knots of breeze powered the 41-strong fleet around the course on Day 1 of the 2017 Cape Panwa Hotel Phuket Raceweek, in what turned out to be a packed race card – three races for all classes except Cruising and Multihull Cruising who completed two races each.

Two Sydney 40's, a Mills 41, a Farr 40 and a Club Swan 42 are up against the might of Ray Roberts' TP52, Team Hollywood (AUS) in IRC 1 and today proved that size isn't always everything. First blood was drawn by Scott Bradley and his crew on East Marine Emagine (AUS) who corrected out in Race 1 just 15 seconds ahead of Team Hollywood – less than a minute separated the top three on corrected time and it was Kenn Eyears's Rerefine (AUS), another Sydney 40, that finished third.

After a slow start by Team Hollywood's own high standards, they found their groove and went on to win Races 2 and 3 and lead the standings at the end of the day. East Marine Emagine added a 2,4 to their first race win while Loco (SIN) placed second in the final race of the day. The award for consistency goes to Rerefine whose three third places today sees them holding third overall.

Defending champion Phoenix (DEN) had a mixed day in IRC II. After winning the opening salvo they struggled in Race 2 after being called OCS and placed fourth, only to recover in the final race of the day with another win and with that, sit top of the class. A close battle for the second, third and fourth placers today saw podiums being shared around. At the end of the day a 4,1,2 for the all-female team on Sailescapes Farrgo Ladies (AUS) has them second overall, ahead of Mike Downard's Krabi Boat Lagoon Piccolo (GBR) in third and Con Macarlino's Plus 16 (AUS) in fourth.

Having finished second in the 2016/17 AsianYachting Grand Prix championship, Chris Mitchell and his crew on Lady Bubbly (AUS) were straight back into their groove winning both races today and kicking off their 2017/18 campaign in style. New to the regatta, the 54-foot Swan Who Dares Wins (GBR), skippered by Ian Kennedy sits second with a 2,4 scoreline ahead of Rick Blomfield's Linda (AUS) who finished the day with two third places.

With four classes, the 24-strong multihull fleet is the largest ever at Cape Panwa Hotel Phuket Raceweek and in the largest of those classes, Multihull Racing, defending champion Asia Catamarans Hurricane (AUS) got their series off to the best of starts with three wins from three races today. Keeping them honest was Thor (GBR) with three second places and Java (CHN) with three third places.

In the newly introduced Multihull Cruising class former winner DaVinci (AUS) and newcomer Mojo (AUS) enjoyed some close racing and traded first and second places, finishing the day tied on points, while a 3,DNS scoreline for Siesta (AUS) has them third overall.

Having won the Firefly 850 class in 2013, 2014, 2015 and 2016, and hot off their win at the Multihull Solutions Regatta in Phuket last week, John Newnham and his crew on Twin Sharks (GBR) didn't put a foot wrong today in the one-design six-strong class and finished with three bullets from three races. George Eddings and his crew on Blue Noze (GBR) finished on the podium in every race and sit second overall ahead of Voodoo (GBR), skippered by Ian Coulson, in third.

Andrew De Bruin's Multihull Solutions H30 (AUS) got the jump on the rest of the Pulse 600 fleet scoring two quick wins and a second to lead the class. A first in the last race today for Neil Ayre's Java Racing (GBR) gives them a two point lead in the series over Simon Oliver's SuDu Red in third.

With the forecasts looking light for today, and the Wind Gods delivering some excellent racing breeze, let's hope for more of the same tomorrow.