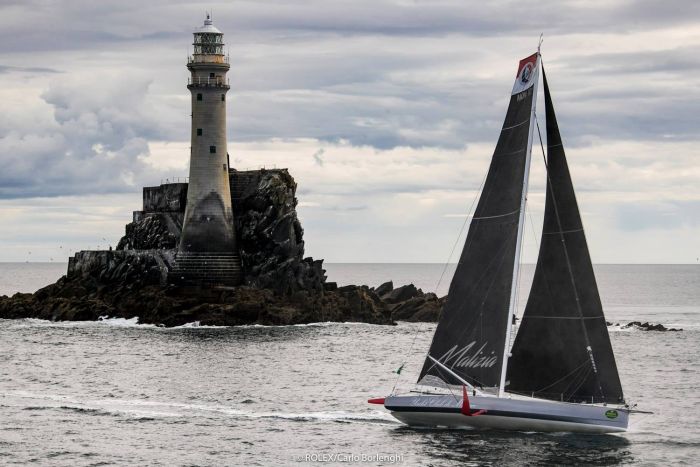 In just one month from now on Saturday 3rd August, 21 double-handed crews in the IMOCA category will line up off Cowes for the start of the 48th Rolex Fastnet Race, the classic biennial offshore race.

Officially part of the IMOCA Globe Series (with a weighting of 2) and part of the selection process for the 2020 Vendée Globe, this 608 mile race takes the fleet via the Fastnet Rock to the finish in Plymouth and will be a good test for the double-handed crews preparing for the Transat Jacques Vabre.

This is also an important race for a few boats from the latest IMOCA generation, as we will be able to see what they are capable of as they take part in their first race. Gwénolé Gahinet, the winner of the last edition in which he raced with Paul Meilhat, analyses the line-up and the race course for us.

All of the races on the official IMOCA calendar fill up quickly and smash all the records for the number of boats competing. The Rolex Fastnet Race is no exception, as 21 duos have registered with a month to go to the start. In comparison, there were just nine in the last edition back in 2017.

Not one, not two, but three shiny new IMOCAs

Everyone is looking forward to seeing the competitors sailing on boats that have just come out of the yards. That is particularly true in the case of Sébastien Simon and Vincent Riou, who will be taking part aboard Arkea-Paprec (a Kouyoumdjian design).

If things go smoothly, Charlie Dalin and Yann Eliès will also be aboard their new monohull, Apivia (a Verdier design). We will also be able to admire Alex Thomson’s brand new Hugo Boss (a VPLP design).

“For these competitors, the Fastnet Race will above all be a way to test the reliability of their new boats. If the weather cooperates, they will be able to get the most out of their machines. But if the wind gets up and the seas are rough, it will be more complicated for them,” explained Gwénolé Gahinet, winner of the race in 2017 with Paul Meilhat on the ex-SMA.

Paul Meilhat racing with Sam Davies will in fact be one one of the favourites this time. These two excellent sailors will set off aboard Initiatives-Cœur, an IMOCA that has been updated with extremely powerful foils. We will also keep a close eye on Jérémie Beyou and Christopher Pratt, as Charal now seems to be reliable, and on Boris Herrmann (Malizia 2-Yacht Club de Monaco), who is currently in second place in the Globe Series.

There are pairings too in the Rolex Fastnet Race, who will be taking part in their first major race together on some very good boats. That is the case for Yannick Bestaven and Roland Jourdain (Maître CoQ), Kevin Escoffier and Nicolas Lunven (PRB), Isabelle Joschke and Morgan Lagravière (MACSF for the first time as a foiler), Louis Burton and Davy Beaudart (Bureau Vallée 2), Alan Roura and Sébastien Audigane (La Fabrique), and we must not forget Armel Le Cléac’h and Clarisse Crémer on Banque Populaire, an IMOCA that Gwénolé Gahinet knows well, as she is the former SMA.

“This is the type of race where that boat is capable of winning, particularly as she sails well upwind,” he said. “Armel finished second on her sistership in the 2012-2013 Vendée Globe and will know how to sail her.”

Then, there are the crews that know each other well, such as Fabrice Amedeo and Eric Péron (Newrest-Art & Fenêtres), Damien Seguin and Yoann Richomme (Groupe Apicil) and Miranda Merron and Halvard Mabire (Campagne de France). For the latter pair, this is an occasion to adapt to the boat.

“In general, I’d say that the standard is fairly even and I’m looking forward to a great contest,” explained Gwénolé Gahinet. “I’m pleased too that the line-up reflects the class’s move towards sustainable development, as this is a subject that is very important to me.”

A race that is worth watching

The race course, which is 608 miles long and part of the selection process for the Vendée Globe, is highly technical. The competitors will set off from Cowes, round the Fastnet lighthouse and then sail back down to Plymouth.

“Even in the middle of summer, there are often very varied conditions and it can be rough,” analysed Gwénolé Gahinet. “In the Celtic Sea, you have to deal with the various weather systems, ridges of high pressure and the influence of low-pressure systems. It can in fact look like some of the legs in the Solitaire du Figaro race, as they have to tack along the coast making the most of local effects and currents.

“It’s fantastic to be able to take part in races like the Fastnet Race, where professionals and amateurs come together on small and big boats. It’s good too to be able to show off the IMOCAs to British sailing enthusiasts. This race is really worth watching.”