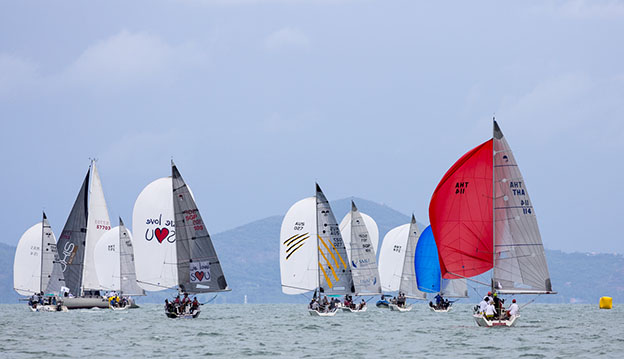 Still plenty to play for in the Platu Class. Photo by Guy Nowell.

PATTAYA, Thailand – All the fleet are playing catch-up in their respective series after two days of unseasonal weather in the Gulf of Thailand and race officers on the keelboat and multihull, dinghy and Optimist courses were eager to get going today.

Two quick windward/leewards for all in classes 1-6 (keelboats, multihulls) and two quick races for the dinghies (classes 9a, 9b and 10) was all the wind gods gave time for as a storm and lightening forced racing to be abandoned early with the entire fleet sent back to shore.

The all-Chinese crew on the TP52 Ark 323 put their first win on the board today, beating out THA72 in the second race of the day by a mere 15 seconds. Noppakao Poonpat, however, secured a win in Race 1 and THA72 now sit at the top with a two point lead going into the final day.

It was all change elsewhere on the keelboat and multihulls course as Loco (USA) and El Coyote (AUS) traded places in IRC 2. A win in the first race for David Dimmock's crew see Loco remain top of the standings, despite slipping down to third in the final race, while a win in the second race for El Coyote see them close the gap to just a single point.

Moving away from their traditional one-race-a-day schedule, the Cruising Class completed two windward/leewards and the racing was close. A 5,1 scoreline for Le Vent (THA) keeps them top of the standings but an impressive performance from Team Splay (JPN) with a 1,2 on the day see them now tied with Le Vent at the top. Just one point back is Dream (USA) and all is to play for on the final day.

It was a tough day on the race track for Sonic (THA). A win in the first race was followed by a DNF in the second and with that, they have gifted the lead to Edenko (FRA) whose consistent pressure and smart sailing means they have a one point margin at the top of the series standings.

With up to 10 races scheduled for the one-design Platus, the weather isn't playing ball and with just two races today the series total stands at five, with only one more day of racing ahead.

Ithinai Yingsiri's Pine-Pacific (THA) struggle for consistency is hurting their overall score. A win in the first race, followed by an eighth in Race 2 means they sit third overall. Two third places for Team Viewpoint (MAS) today see them consolidate their top position while a seventh and second is enough for Easy Tiger III (AUS) to hold second overall, three points back.

Six of the 11 Platus have been on the podium so far this week and at times winning margins are under ten seconds. With such close racing and the drop yet to come into play, there's chance for some big moves tomorrow as crews, no doubt, will be hoping for a minimum three-race final day showdown.

Dinghy Classes (9a, 9b, 10)
After battling incessant storms on Day 1 and Day 2, the huge monohull dinghy fleet now have four races completed in their series.

Comprising Laser 4.7s and one Laser Radial, at the end of their first day of racing the Class 9b standings were as follows: First, Saranrong Poonpat, second Sophia Gail Montgomery and in third, on equal points, Chanokchon Wangsuk and Paliga Poonpat. Two firsts for Sophia Gail Montgomery on the second day sees her move up the standings and she now leads by a single point from Saranrong Poonpat in second and Paliga Poonpat in third.

Thailand Optimist National Championships
At the end of the Optimists' first day of racing (yesterday), defending champion Panwa Boonak (THA) was tied at the top of the Gold fleet with Hong Kong youngster Duncan Gregor, and Jedtavee Yongyuennarn two points further back in third. In the Silver fleet it was another tie at the top, this time by Kritphet Suwanarai and Yoth Srimanchanda with Aditep Mattapa sitting in third at the end of Day 1.

Day 2 (today) was cut short by a storm which blew 25 knots across the course and intermittent lightening, resulting in the Race Officer sending the fleet to shore after just a single race. Panwa Boonak took up where he left off adding another win to his series results and with a tenth place for Duncan Gregor (HKG) he slips down to third overall, and fellow Hong Kong sailor Casey Law moves up to second. One of the big movers in the Gold fleet was M.L. Weka Bhanubandh who's second place finish moves him up to sixth overall and within striking distance of the podium.

In the Silver fleet, a first in the sole race of the day for Yoth Srimanchanda sees him extend his lead from Kritphet Suwannarai while a third for Phanphatsa Khumban is enough for her to retain third place overall.