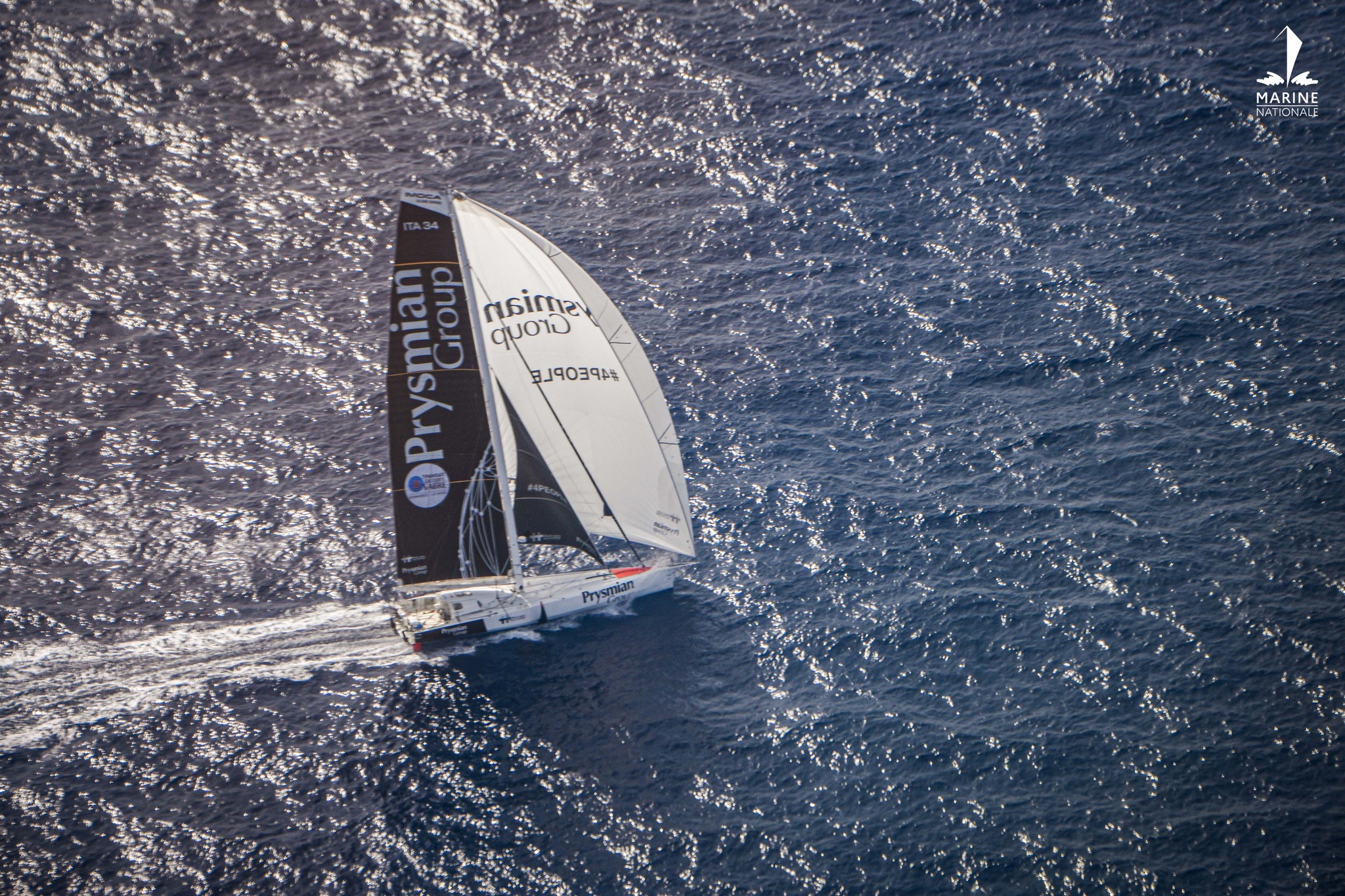 The next two days could be crucial in deciding the winners of the Transat Jacques Vabre.

Lead changes are expected across three of the four classes today as the weather roles the dice.

Ocean Fifty – searching for a way out

Lying fourth, Leyton has made up nearly 100 nautical miles on the OceanFifty class race leaders Primonial since yesterday. There are around 300 miles to the little Brazilian island of Fernando de Noronha which is the most southerly turning mark on the Transat Jacques Vabre race.

Sam Goodchild and Aymeric Chapellier are quickest in the OceanFifty class this morning making over 17 knots, but – as ever – the British sailor remains cautious. “Are we out of the Doldrums yet? Well, that is not a question you ask or answer….when you say you are out you’re not! And we saw yesterday afternoon our friends in the west were going SSW at good speeds but last night they were stopped, which is good for us,” said Goodchild.

“We are not out the Doldrums and will just carry on going SSW until we get to Fernando. Yesterday was a chance to just catch up on rest, I think we both got some good longer sleep which was good, proving we really needed it. We are just plugging away.”

Later today, the class should break free and start to pick up speed towards Fernando de Norohna, the final turning mark before Martinique.

The head of the Class40 fleet is getting closer and closer to Cape Verde and more particularly to the island of Sal, which they must leave to starboard before they can head across the Atlantic. However, the weather conditions remain complicated.

“The conditions are light and it’s not going to get any better for the next 24 hours. We’ll have to cross a zone of light winds before we can hope to find the beginnings of trade winds,” explained Valentin Gautier (Banque du Léman).

The leading group has been caught up again. “Our lead over the fleet will melt away like snow in the sun. We will be trying to make the most of it once again, as the next night promises to be one of the most important of this transatlantic race,” said the Edenred pairing last night.

Ultime – the miles are flying

This morning, the Maxi Edmond de Rothschild has a 300-mile lead over the second ranked Ultime, Banque Populaire XI.

Franck Cammas and Charles Caudrelier have averaged much higher speeds than the rest of the fleet as they head towards the virtual course mark located 20 miles to the north of Trindade Island. “It’s always nice to have a lead over our pursuers like that, it allows us to manage things better, but we mustn’t forget that in a multihull it doesn’t represent much time, so it can come back quickly. We mustn’t stop, we mustn’t have any technical problems and then it’ll be fine,” explained Cammas on French radio this morning.

They’re expected the round the waypoint early this afternoon before starting the ascent towards Martinique at high speed. At the rear of the fleet, Sodebo Ultim 3, who had decided to start racing again despite a weakened foil, is now out of the Doldrums and will be able to follow in the footsteps of her rivals up front and begin her descent.

IMOCA – the pressure is on

The high pressure, cat-and-mouse racing will continue into another day. At the front of the pack LinkedOut, Charal and Apivia have broken free, leaving three other boats Initiatives-Coeur, Arkea Paprec and 11th Hour Racing Team – Mālama, 140 miles behind them.

By the end of the day the leaders should enter the Doldrums, a zone that is becoming increasingly complicated. They will first have to find a favourable entry point to the east and then will have to slalom between the squalls and the lack of wind. A good 36 hours of nail-biting decisions await the skippers.