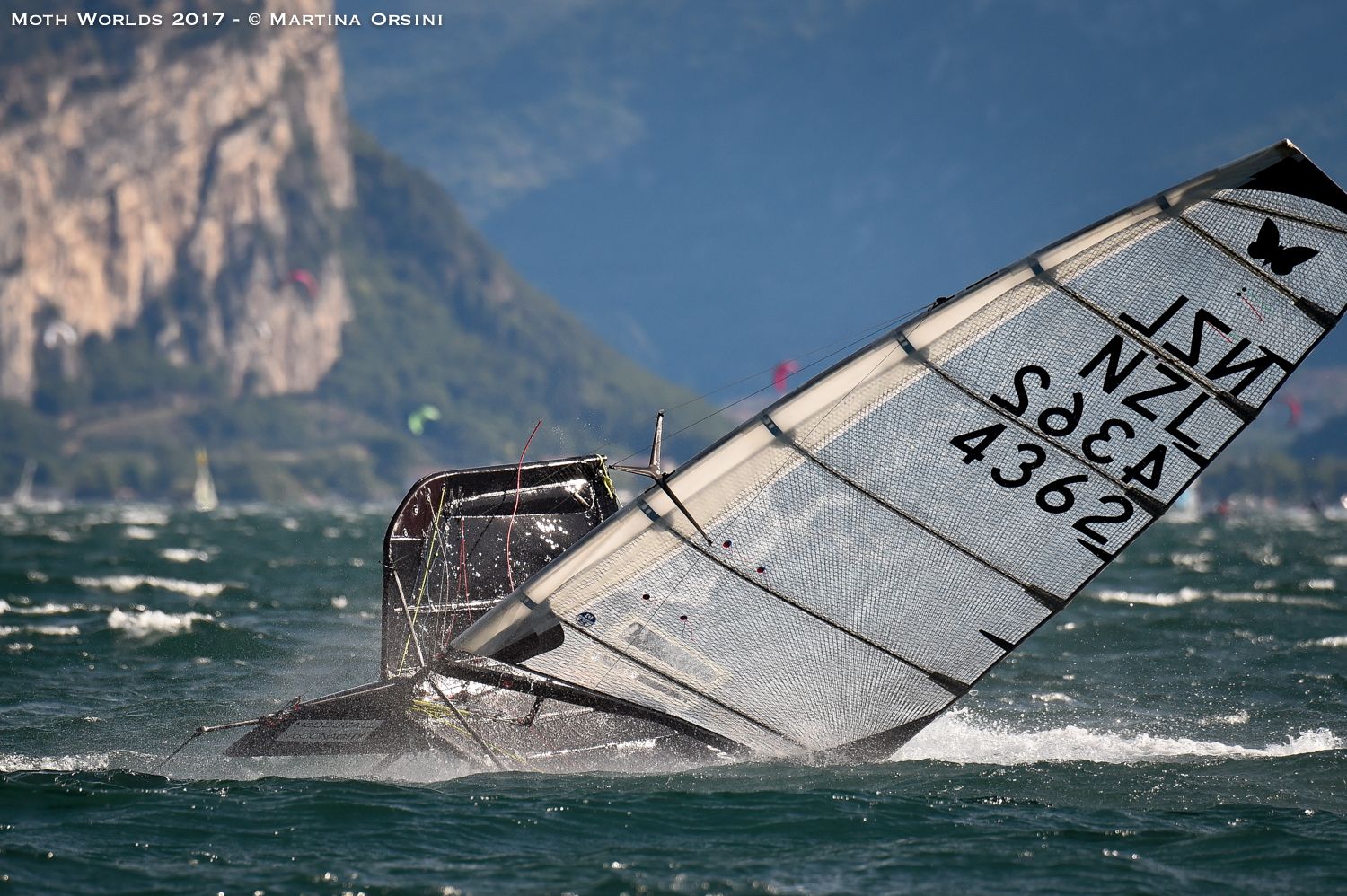 The early morning Peler from the North provided contrasting fortunes for the fleet of 220 Moths racing day 3 of the McDougall + McConaghy Moth Worlds 2017 hosted by Fraglia Vela Malcesine. After a lunchtime break to repair boats and refuel with more pasta, all fleets were sent back out for a much more sedate afternoon of racing, but again the Garda wind gods had other ideas. By 1600hrs the weak afternoon breeze shut down for the day determining the all important Gold, Silver and Bronze fleets for the Final series.

The Green and Blue fleets were sent out early for a 0830 hrs start but a number of competitors stayed ashore to make a late judgement as to whether to sit out the first race of the day.

The Blue fleet was sailing the Southernmost course off the picturesque medieval city of Malcesine. However, just the downwind dash to the race course proved too much for many. The Peler was honking a good 20 – 25 knots with some steep waves. After about an hour the PRO got racing started but only about 16 boats got off on time. Some others joined shortly after to complete one lap and get a score on the board. For the second race of the day, race 4 of the event, the breeze did soften into the teens but the conditions were still gnarly and difficult for the club level sailors.

Paul Goodison (GBR) took up from where he left off yesterday adding another two wins to keep a perfect scoreline. He was pushed hard but never really threatened by another Olympic medallist from GBR, Simon Hiscocks, who finished with two excellent seconds. Tom Offer from Rock Sailing Club in the UK was also rewarded for his persistence adding a 3,4 to his score. There were good performances for some of the master category sailors, Americas Cup team coach, Philippe Presti (FRA) finished the tough first race and took 5th in the second. Another Americas Cup sailor, Francesco Bruni (ITA) got round the course finishing 5th in the first race.

The Green fleet set up at the Northern course which is where the lake is at its narrowest with the mountains either side. The breeze was similar here with 20 – 25 knots and with nasty steep waves. A number of mothies reported boat speeds in the early thirties (knots), recorded on their instruments.

This group was randomly loaded with rock stars and proved to be the most dramatic of the day. Double world Moth champion and hot favourite, Nathan Outteridge (AUS) blitzed the first race but agonisingly suffered another major rig failure as his mast broke going at full speed.

“It was pretty fresh out there this morning, we were getting mid 20’s and bigger gusts. At the top of our course, it was quite flat but lumpy at the bottom.”

“I managed to win the first race but then in the second race I had a pitch pole in the middle of the bottom gate when I was in 2nd or 3rd, and snapped my mast, so that is two DNF’s in two days from two different things, so I am just running over the boat pretty closely now.”

Another top contender and long term Moth worlds podium finisher, Scott Babbage (AUS) also suffered further breakages with a vang failure. Even the unflappable current king of sailing, Pete Burling (NZL) suffered a number of stacks as he appeared to be suffering from control issues downwind. Pete finished 8 and 11 for the day.

Ben Paton (GBR) usually revels in the strong winds but having crossed the finish line in 3rd in the first race, he was leading race 2 when one of his ample biceps (arm muscles) caused him pain, forcing him to retire.

The standout sailor from the Yellow group was another 49er Gold medallist and AC sailor, Iain ‘Goobs’ Jensen who found form and speed in abundance to card 2,1 from the morning session.

“I was just getting around cleanly, the boat was working really nicely, it was definitely a survival day, there were big waves and gusts of up to 26 knots, so it was basically whoever didn’t swim was going to be in the top few.”

“A few guys had new foils on and we're still just getting used to them, but I had the standard Exocet small foils on and they were going well. It was really good fun, awesome sailing, some guys who had the Velocitek’s on were recording top speeds of 32 knots.”

Also enjoying the heavy stuff was Arnaud Psarofaghis (SUI) scoring 6,2. Emma Spiers from Australia did well to finish both races upright with a respectable 19,23 and one of the lightest and smallest mothies, Josie Gliddon (GBR) finished 22,22 with her cut down rig proving a valuable asset. Around 25 boats finished both Green fleet races.

The Yellow and Red fleets left the shore around 1100hrs, by which time the breeze was beginning to drop down to a more manageable 12 – 15 knots, fading to 10 or less for their second race of the day. The waves had also dropped resulting in much less boat damage and capsizes.

There were 44 finishers in the first race and 50 finishers in the second for the Red fleet on the Northernmost course. The race track looked a bit more one sided with the fleets sailing straight off the start line to hit the steep Western shoreline of the Lake before mixing it up with the local ferries scuttling up the coast, totally mind boggled by what was happening around them!

At the front end former Moth world champion, Josh McKnight (AUS), sailing his own Moth design, shared top spot with Rob Greenhalgh (GBR) finishing with a 1,2 for the day.

Franco Greggi who is one of 5 boats from Buenos Aires in Argentina, was one of the outstanding performances of the day in the Red fleet, mixing it up with the leaders with a 3,5.

“It was a very difficult morning because you have to choose your mast and foils carefully, I chose the smallest foil I had and I am happy I did. My main idea was to start well where there were no boats and try to use my speed in order to get to the front. There are a lot of top sailors with a lot of speed so It was really good to be with the leaders. I am very happy I am in the top 30.”

Another of the Corinthian sailors, Dave Hivey (GBR) continued his good form with a 7,3 to keep in the top group overall.

The Yellow fleet was the last to start their races, sailing on the Southern course off Malcesine. By the time they started the Peler was all but gone and they raced in a much more sedate 10 – 15 knots with flatter water. Tom Slingsby (AUS) fired another bullet and a 7th to stay in the lead bunch overall.

Fellow Australian Laser Gold medallist, Tom Burton finished 4,2 and a third Aussie, Harold Mighell from Sydney, finished 2nd, but with a bad second race finish of 26th. Corinthian, Rory Fitzpatrick, one of a flutter of mothies from Ireland finished with an excellent 7 and 1 in the morning session.

The Yellow fleet was the first to be sent out for the afternoon session in a light 10 – 12 knots from the South and flat water however after a long wait the weather gods again foiled the race committee and racing had to be curtailed for the day.

With 4 qualification races completed per group, sailors can discard their worst score. So the points table at the end of qualifying shows Paul Goodison (GBR) with a string of bullets followed closely by Tom Slingsby (AUS), with three wins and a discarded 7. Rob Greenhalgh (GBR) sits in 3rd, Iain Jensen (AUS) 4th and Josh Mcknight (AUS) 5th. Pete Burling (NZL) sits in 15th and due to damage Nathan Outteridge (AUS) is down in 35th. For the same reason, Scott Babbage (AUS) sits in 41. Some regular club mothies stack up in the top 20 which is a credit to them in such a high-class field as this.

Annalise Murphy (IRL) is the top female competitor, easily qualifying in the Gold group. There is a cluster of women who will race against each other in the Silver fleet. Emma Spiers (AUS) 102, Wakaka Tabata (JPN) 108, Josie Gliddon (GBR) 113 and Emma Gravar (SWE) 114.

Of the Masters, Jason Belben of Stokes Bay sits in an admirable 23rd, one place ahead of long time Moth campaigner Rob Gough from Tasmania, Australia. Phil Stevenson, the grand master of the fleet is comfortably in the Silver fleet in 133 spot.

The two Italian Ferrighi brothers lead the Youth category (under 23yrs), Gian Marie qualifies in 18th and Stefano in 44th.

The Final Series of racing begins tomorrow (Friday) for Gold, Silver and Bronze fleets with a first start scheduled for 1300hrs.