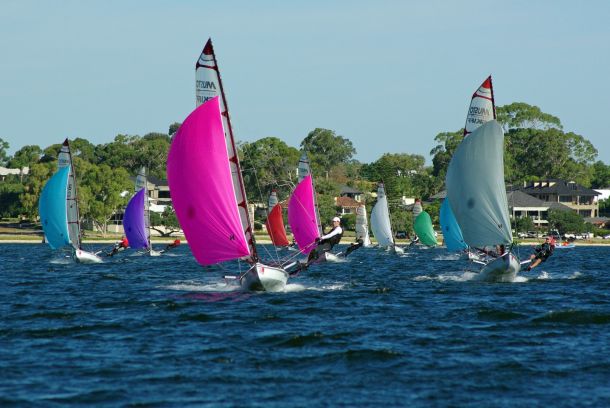 The charge of the Mustos. Photo Rick Steuart/Perth Sailing Photography.

The sailors were talking at the breakfast table of a forecast of 25 knots or better with big whitecaps on the water and a fair number of capsizes to deal with. Down on the lawn, they were working on how to take spare tiller extensions with them in case they broke them.

The start boat took off with an easterly still in charge and once we had settled into position it was a case of wait and see.

After a few false starts caused by massive wind variations, the RO had the Mustos underway for the first race on a 130 degree course and 7 to 10 knots on offer. The game of Snakes and Ladders came to mind with the leaders swapping with the lower orders after the first rounding of the gates and Tim Hill shot into the lead.

Soft conditions on the next beat saw Tim lose his lead to the chasing pack. On the next run down the pack was reshuffled with Jon Newman and Marcus Hamilton advancing to the finish, while John Reekie was able to snaffle third. The rest of the fleet was able to consider the chances they had during the first race and look forward to the next.

In the second race, a building southerly greeted the fleet and with a generous top up of cold water from the safety boats, the choice was to go left or right on the first work up the hill. Playing the middle paid for Richie Robinson, Marcus Hamilton and Jon Newman as they hit the top mark with Robinson in the lead.

The breeze filled in a little more and the three sped off from the rest of the pack on a port gybe with Marcus in the lead followed by Jon Newman and Robinson third. The greeting at the gate was nothing less than a 45 degree course change to the left, that had some of the tailenders floundering.

Newman went hard left, having picked up the new mark while Marcus and Richie took off up the centre. The left call paid off with Newman 200 metres in front of the pair at the mark and his down wind speed made him untouchable. Marcus Hamilton, still recovering to a serious cork to his arm from yesterday, made it quite clear he was in recovery as he rolled Robinson half way down using the huge left pressure to carry him through.

Good breezes are forecast for Thursday and the Musto pack is waiting. Can the master of cool Jon Newman, keep the ball rolling with these big wins? Will the flying Scotsman Ian Renlison continue to improve?

These questions will be answered eventually or go to the full results, available at http://www.mustoskiff.com.au/

– Rick Steuart, for the ACO Musto Worlds in Perth WA