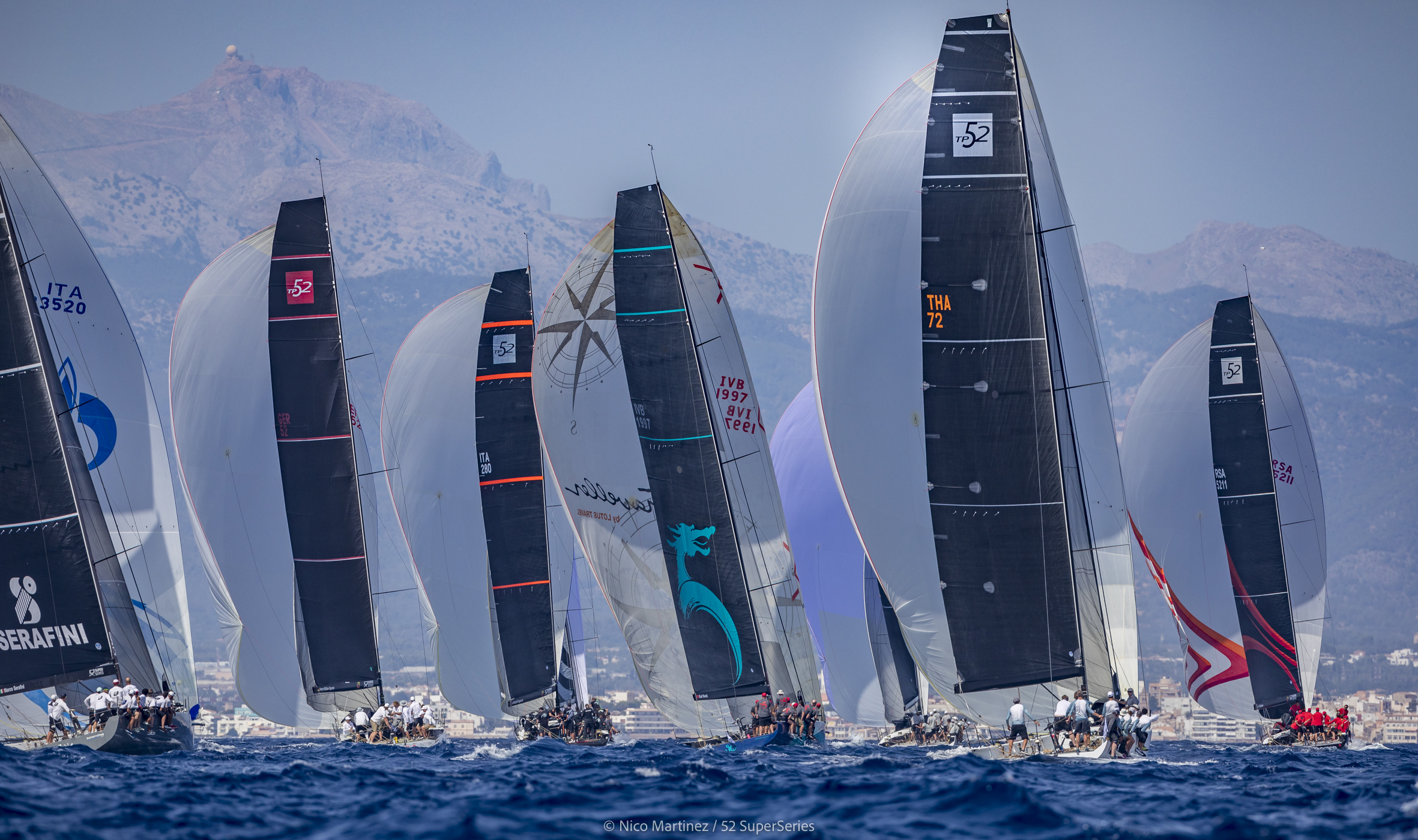 After two days of practise races on the Bay of Palma, the sailors competing in the Puerto Portals 52 SUPER SERIES Sailing Week are primed for action and ready to start racing for points and prizes on Tuesday.

The atmosphere around the dock and the sailors lounge in glitzy Peurto Portals, Mallorca has been almost festive. After more than 18 months with no 52 SUPER SERIES racing there is a definite hunger to be back out competing at this highest level. The practice courses have already re-ignited old rivalries, restoring and reinvigorating partnerships and – of course – buffing off the inevitable signs of rust.

And the mood of anticipation is certainly heightened by the presence of the nine 20th Anniversary Invitational regatta 52s. For some of them it is their first time with the world’s leading performance monohull circuit, for others among these crews it is a great chance to relive happy memories.

But seeing 16 TP52s starting on the same line and racing on the same course Sunday and today is, in part, what this event is all about. Karl Kwok’s Beau Geste – built as Onda – has Gavin Brady and Ken Read combining their talents. They won the practice race, ahead of Harm Muller-Spreer’s Platoon and Hasso Plattner’s Phoenix.

Australia’s Tom Slingsby will be doing tactics aboard Phoenix.

Owner Doug DeVos flew in today to take the helm of four-time champion – Quantum Racing. Crewing on Quantum Racing is Terry Hutchinson, who is delighted to be back in the class where he has prospered since the first Quantum Racing competed in Palma in 2008.

“It’s awesome to be back,” said Hutchinson. “Doug and I were talking here about the opportunities we’ve had over the last few years to experience completely different aspects of our sport.

“Yet you come back and start racing these TP52s and realise how refined the boats are and how good all the teams are and every inch that you earn is exactly that. It is an earned gain.

“The thing that’s the most noticeable is how even the fleet is. More so than ever the game of inches is critical.”

Giles Scott and Paul Goodison America’s Cup sailors from opposing teams joining forces at the back of Tony Langley’s Gladiator. According to Hutchinson, recalibrating their brains from America’s Cup flying speeds to TP52 velocities and feelings will not be easy.

Hutchinson, said, “Yes, the change is hard. We’re really lucky to have Michele and Lucas (new strategist Lucas Calabrese), they’re helping a lot in the pre-start. Getting your head back round the timings is difficult. All the other teams are hot on that.

“And everybody’s good here- the boats are littered with Olympic medallists and America’s Cup sailors, that’s exactly what you want. Racing at the highest level of the sport with incredible owners and an incredible fleet. I love it here.”

Britain’s double Olympic gold medallist Giles Scott has raced a few regattas with the Gladiator but this is his first 52 SUPER SERIES experience.

Scott said, “It is nice to be out doing some big boat racing again. This is good racing for sure. We made a few silly little errors today but we are on the upward trend now hopefully.

“But racing around with 15 boats is very cool there are a lot of good guys here, a lot of good teams. But we feel like the underdogs, we’d like to beat a few good boats throughout with week, hopefully we can do alright.”