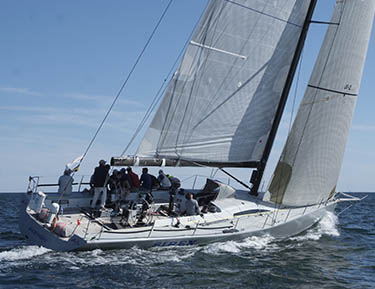 Newport RI: June 20, 2016— The 50th Thrash to the Onion Patch, the 2016 Newport Bermuda Race, has not been a dash. Following Comanche’s record-breaking run to Bermuda, chopping almost five hours off the 2012 numbers, the fleet stalled against the northern wall of a high-pressure system. They stopped just above the Gulf Stream. The lead boats slowly began to work their way into the new breeze in the early morning Monday. Vamp, Lenny Sitar’s J44 sailing mid-fleet, popped through the wall and reported they were finally sailing under spinnaker making 9-10 knots on a beautiful Monday morning.

The lead boats for ‘traditional’ line honours based on positions late Monday were Maximizer a Farr 72, Siren, and High Noon are estimated to finish between 1:00AM and 3:00AM EDT on Tuesday morning. Orca is bringing up the rear and predicted to finish in the late afternoon on Friday 24 June, a week after their start. They certainly have not experienced any of the rough weather predicted that scared away so many entries… much the opposite so far, it seems.

Of the 184 boats that had checked in to race before the start in Newport,  46 did not start and seven have withdrawn for various mechanical reasons. All of the Gibbs Hill Division boats decided not to race, including all three Maxi72’s that might have challenged Comanche for line honors.

Maxi72 Bella Mente’s team issued the following statement, “After much consideration and research on the weather patterns forecasted for the 2016 Newport Bermuda Race, Bella Mente has made the difficult decision to withdraw from the event.” The rough weather predicted by some forecast models was the reason so many boats did not start. They were being safe and conservative, but their fears and the predictions proved unfounded. At 5:00pm EDT Monday, race communications reported, “It appears that there is very light air in their area at the western edge of the fleet.  Boats around Spirit of Bermuda show boat speeds of 2 knot + or minus.