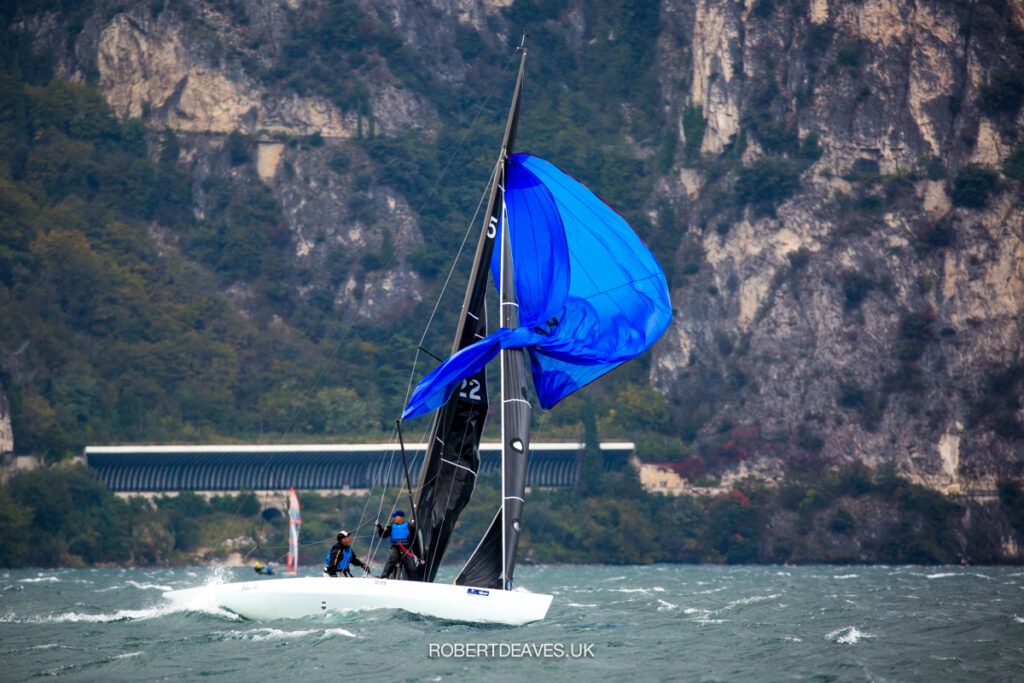 Even the overall leader, John B, struggled in the strong winds. Pic - Robert Deaves 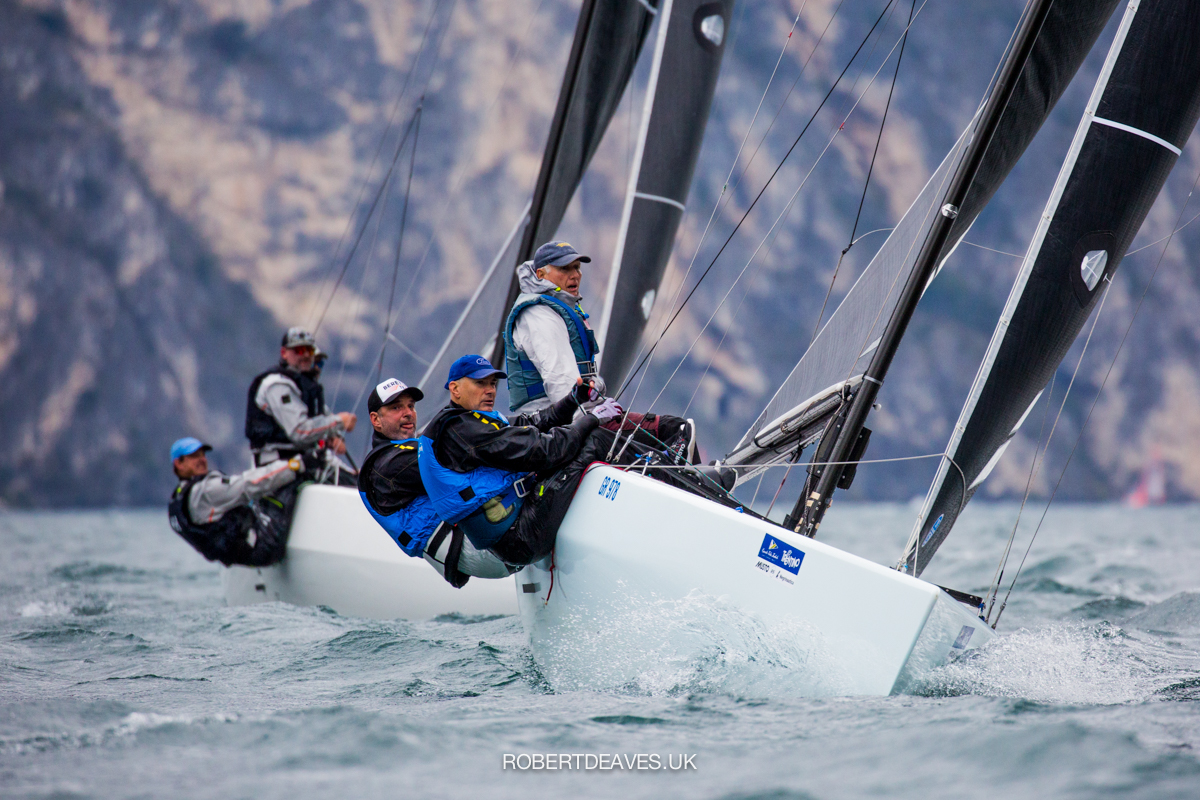 John B is sitting at the top of the leaderboard. Pic - Robert Deaves 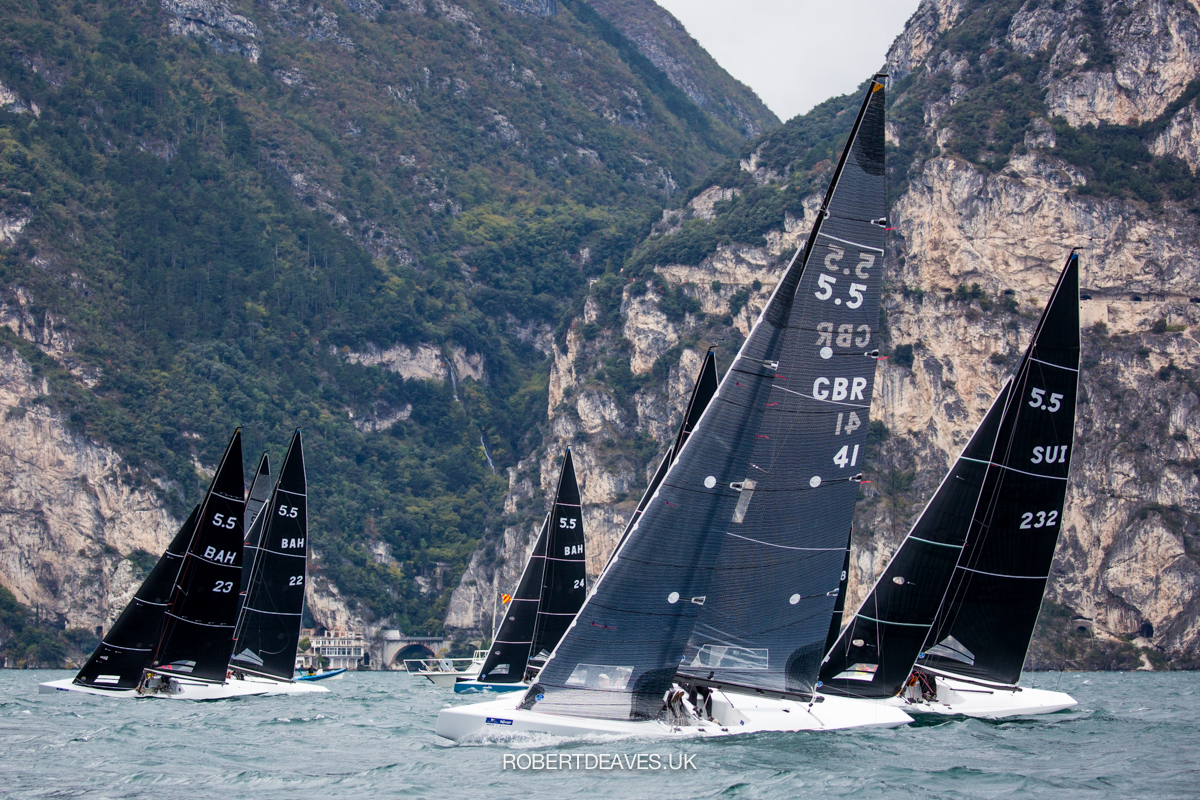 The 5.5 Metre Alpen Cup at Circolo Vela Torbole, on Lake Garda, Italy, is normally the opening event of the season, but it has been cancelled the last two years because of COVID.

However, this year the club kindly offered to host it at the end of the season instead, so it will now close the 2021 season and open the 2022 season.

Girls on Film is actually the current holder of the Alpen Cup, having won the last event in April 2019. The Alpen Cup was established in 2006 by Jürg Menzi with the intention of establishing an important annual regatta for the class on Lake Garda. The success of that idea has made the Alpen Cup one of the premier events for the class each year.

The opening day was sailed in quite cloudy, dull, blustery and damp conditions, and many of the crews were admittedly rusty in these conditions, with a few gear and navigation problems along the way. The fleet was sent ashore after the second race with even bigger winds coming up the lake.

Ali-Baba (BAH 23, Craig Symonette, Flavio Marazzi, William Alloway) was fastest to the top mark in Race 1, but a series of errors and a bizarre collision at the spacer mark, left her and New Moon II (BAH 24, Mark Holowesko, Christoph Burger, Peter Vlasov) heading for the crane. Momo had taken the lead by the bottom and went on to comfortably take the win from John B and Marie-Françoise XXII.

In the second race, Momo led at the top but pulled out as an early starter. This left Girls on Film in the lead, but an exploded halyard cleat and a locked halyard cost them the lead at the bottom, which was taken by Otto (NOR 68, Bent Christian Wilhelmsen, Lasse Berthelsen, Luka Strahovnik). Girls on Film finally cut the halyard to resume the race, but it was a long way from being over.

Otto led at the top but the final very gusty downwind caused numerous broaches both for them and John B. John B just managed to get control to cross second from the fast approaching Marie-Françoise XXII and Girls on Film.

Jürgen Eiermann middleman on Marie-Françoise XXII, celebrated his birthday today. He said, “Today was a little bit special. I think for all teams there was enough wind. It came from the south and wasn’t directly an Ora, it was caused more by the weather situation.

“I think was not a typical day to go to the left, you could go on the right side too. So we had a nice sailing day with a second and a third, but everyone had problems with spinnakers and broaching.”

John B helmsman, Gavin McKinney admitted to being a bit rusty.

“We all love coming here because the wind is usually great. Today was fun but we’re we all rusty. I haven’t raced this boat since we were in Australia. (January 2020).

“I guess you could say we made a few less mistakes. But it looks like everyone was a bit rusty and we had some pretty strong breezes. Some gusts were pretty big and it was hard to control downwind. We had two pretty good starts and just seemed to hang in to the end and had a good day with a 2 and 1.

“It didn’t seem like any side was particularly favoured. It was more about the shifts and we certainly missed a few. Remembering what’s happened here before we didn’t feel that the wind was consistent with what’s happened in the past.

“In the first race we fell into a hole and went from a good second to a bad fourth and then the second and third boat had some control issues downwind so we got past them again. Then in the second race, Momo was over the line. We made a big dip at the start because I was concerned we were close, so seems it was the right thing to do.”

He said the big issue today was boat control. “We managed to control the boat OK and that’s what made the difference today. We were behind boats that lost control, and we lost control twice but we recovered quickly and then it was just a matter of staying calm and hold it together.”

Racing continues until Saturday. A total of eight races are scheduled.