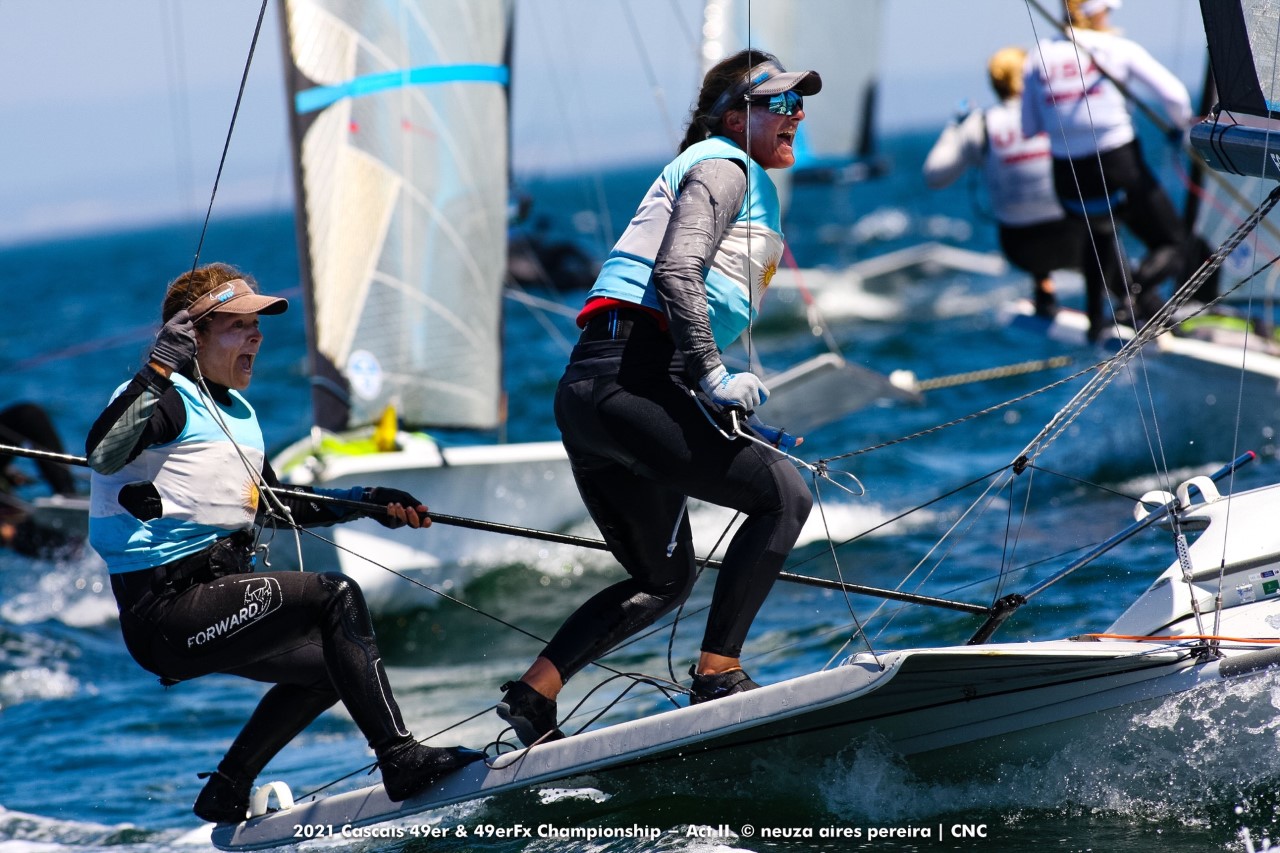 At the end of three races of the 49erFX Cascais Championship, topping the overall standings is Charlotte Dobson/Saskia Tidey (GBR), who won the last race of the day, while Victoria Travascio/Sol Branz (ARG) are in second place, with Tamara Echegoyen/Paula Barcelo (ESP) in third.

This Championship will serve as a barometer for the Olympics during this summer. Taking part are 2020 European champions, Tina Lutz/Susann Buecke, with the 2020 World Champions, Tamara Echegoyen/Paula Barceló, and 2016 Olympic gold medallists, Martine Grael and Kahena Kunze.

With the first warning signal scheduled for 11:00am, the Olympic fleet of 21 boats (the same number of boats that will be in Tokyo within 45 days), set out around 10:00am to find an unfit race area to start the Championship.

The Race Committee tried to change the location of the race course, from Guia Race area to inside the bay. But the area with the thermal wind in Cascais Bay, did not have enough breeze to hold a race.

Consequently, the organisation sent the fleet ashore to wait for better conditions. These conditions emerged and after midday, the female Olympic class sailors set off to race.

With the wind at around 10 knots and shifting right, it could be seen that the favourable tactical options of the boats in front were always on the right side of the course throughout the first day.

After the first training event in May, the best Olympic Class 49erFX sailors in the world have regrouped in Cascais, Portugal for the last race before the Summer 2021 Tokyo Olympics Games.

In total, five continents are represented – North America, South America, Europe, Asia and Oceania – with a total of 19 nationalities represented at the Championship being held from 7-12 June. Three races are scheduled plus a Medal Race for the top ten that is worth double points.

This championship is supported by Turismo de Portugal, Visit Cascais, Cascais City Council, Portuguese Sailing Federation, Cascais Marina and Vista Alegre. We also have the institutional support of the non-governmental association, Sailors For The Sea – Portugal.