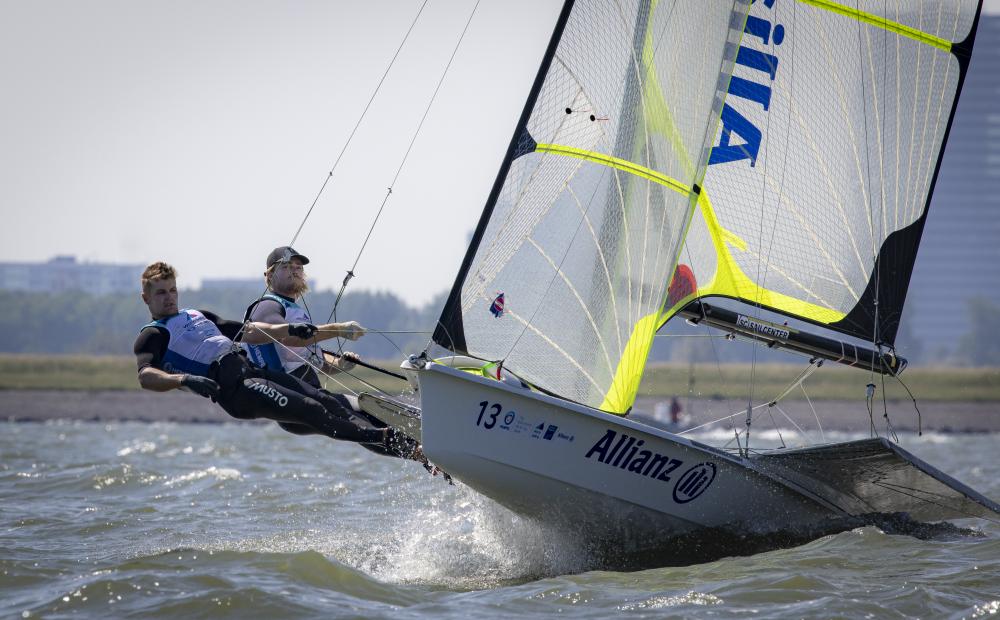 With temperatures reaching 25 degrees and winds picking up from 12 to 19 knots by the end of the balmy afternoon, the Markermeer waters between Amsterdam and Almere delivered stunning sailing conditions for all 10 fleets.

The perfect wind enabled race committees across all courses to make up most of the races lost to lighter and more fickle breezes earlier in the week.

In the 49er, Lambriex and van der Werken reminded their rivals why they won the world title in Oman at the end of last year. Winning five of the last six races, the Dutch go into Saturday’s Medal Race with an unassailable 29-point advantage. The gold medal is theirs.

Floris van der Werken explained their winning approach: “It was quite a strong field. A few of the world’s best are missing, but not many. We didn’t really focus on the results this week, though, we never do. The focus was on communication on board.

“We try to sail as one brain but with the capacity of two. Four eyes see more than two, but we have to think the same. That went very well this week. If the communication is good, if we give each other the right information, then we make the right decisions and we win.”

As to 49er silver and bronze medals, Robert Dickson/Seán Waddilove (IRL) and Lucas Rual/Emile Amoros (FRA) hold second and third currently, but with many teams breathing down their neck and ready to knock the Irish and French off the podium.

Belgian breakthrough in 49erFX
It’s also the reigning world champions who hold the lead in the 49erFX fleet, although Odile van Aanholt and Annette Duetz (NED) will need to be at their best if they’re to secure Gold on home waters tomorrow. Winning the last two races of the afternoon,

Isaura Maenholt and Anouk Geurts (BEL) have shot into second place overall and sit just four points off the Dutch lead. Just a point further back in third are Australians Olivia Price and Evie Haseldine with another Aussie team, Laura Harding and Annie Wilmot, well within striking distance of the podium.

Castelein was a little disappointed to have yielded some of his advantage, even if he holds on to the gold medal by a whisker.

“I think I am still in the lead, but I would prefer to be on top on the last day, but that is why a good score tomorrow is also important. I grew up here, I’m a member of Surfclub Almere Centraal, so it would be great to lift this cup here on my home turf,” Castelein said.

Karachaliou leads ILCA 6
In the stronger wind, Louise Cervera (FRA) tumbled from the top of the leaderboard to eighth overall in the ILCA 6 fleet. This left the way clear for Vasileia Karachaliou (GRE) to take over the gold medal position for the first time, seven points ahead of the reigning world champion, Emma Plasschaert from Belgium.

It was a great day too for Maxime Jonker (NED) too. She moves up to third overall.

Nacra 17 – Laila van der Meer/Bjarne Bouwer (NED) were unstoppable in the breeze, winning all races to take the overall lead

The forecast is looking good for Saturday when Medal Races are due to be contested:

Racing continues for the iQFOiL and Formula Kite fleets further north in Lelystad. The foilers contest their Medal Series showdown this Sunday.