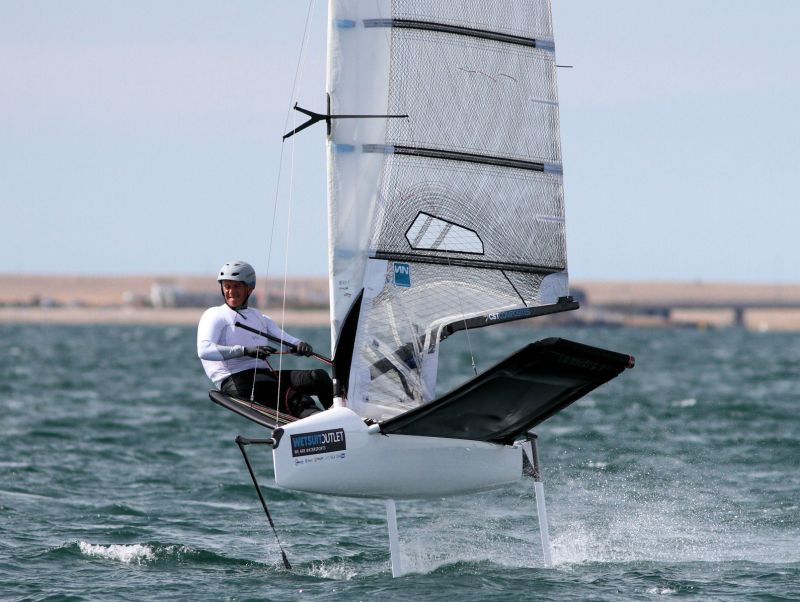 After a slow start to Monday as the forecast wind filled in as predicted, the UK Moth fleet took to the water for an event many thought would never happen. It’s not the Worlds that was scheduled, and the majority of the overseas entries haven’t been able to make it due to quarantine restrictions, but it is the sailing event of 2020.

Three races were held on the opening day starting light, both in terms of sunshine and wind, and ending up with a cracking 15 knot wind, albeit with an overcast sky. Can’t have everything I suppose…

Defending champion Dylan Fletcher has started the event with the clear intent to defend his title. Quick off the marks, he reeled off two bullets in the opening races with extraordinary pace on the downwind legs.

“I’ve been working quite hard as obviously we expected this to be the Worlds,” said Dylan. “It’s great to be racing and I had a brilliant day! I’m a bit lighter than I was last year and seeing people like Tommy (Slingsby) go really well, I’ve made a few changes – flattening the sail, a softer mast and trying to go smaller on foils – I still think it’s not enough and that physics is hard to beat, but I’m working on it!

“The boat’s set up really well for downwind and I think being a bit lighter helps. It was pretty loose at times, but that’s what we like! Upwind I was hitting 18 knots and downwind around 25.”

The final race of the day saw Dylan’s great friend and 49er crew Stuart Bithell get one over on his helm, taking the bullet.

“It felt like I bedded into the day a bit! A little bit rusty and nervous to start with, having not raced for a while in these boats, and I gained more confidence as the day went on,” explained Stu. “I gave it a nudge in the final race, got a good start, a good first beat and just tried to hold on from there. On the final run to the finish I just got settled in the groove and thought ‘Just get the layline right!’, tried to forget about Dylan breathing down my neck and just about held him off. It’s pretty cool to be out there racing to be honest.”

Dylan echoed his thoughts about their friendly rivalry: “Stuey nicked me in the last race but I think I’ll let him have that! There was a lot of shouting and whooping, egging each other on so yes, it was a lot of fun, we have a good rivalry and great relationship.”

One sailor returning to the fleet after a five year lay-off, with his time usually being taken up on the professional racing circuit, is Alister Richardson. Sailing his 2016 home-build Moth which was stored in his garage, he’d only had a day’s practice in the boat, but loved every minute of it:

“It’s excellent isn’t it? I was a late entry and managed to jag my way in. I was laying in bed on Thursday thinking ‘Hmmm, it’s not looking too windy, I haven’t sailed my Moth in four years and I’m not doing too much else, why not?’ and it’s been good fun! I finished all three races and didn’t break anything, which is always a bonus in a Moth. I’ve only got big foils but my best result was in the last race with the highest wind so I’m steadily improving!

“It’s such great fun to go racing. My boat may not be up to date, but it’s better than being sat at home on the sofa. There’s no point being precious about not doing too well – it’s just about trying to race the best you can with what you’ve got!”

One of the class regulars and a member of the Rutland foiling squad is Matthew Lea, who enthused about the first day and getting back to racing:

“Absolutely glamour conditions, loving my Rocket, it was a great day. Results-wise I got two in the teens and one in the top ten so I’m very happy. Please book in these conditions for the rest of the event!”

So, a great start to the racing and a favourable forecast for the rest of the week. The foiling Moth class is back in style!