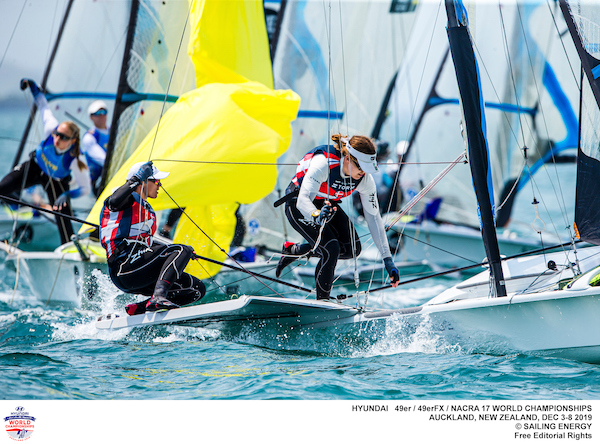 On the fourth day of the 2019 Hyundai 49er, 49erFX and Nacra 17 World Championships, the race for the titles and Olympic qualification is beginning to take shape as the fleets split into their respective Gold fleets.

49er – Germans and Kiwis break away
Two teams have separated themselves at the top of the 49er leaderboard. Erik Heil/Thomas Ploessel (GER) extended their lead over Peter Burling/Blair Tuke (NZL) on the first day of finals racing, winning the day with three top ten finishes and edging themselves one step closer to their first 49er World Championship.

Hot on their heels the local heroes of Burling/Tuke didn’t have an ideal day by their exceptional standards. However the gold and silver Olympic medallists can take solace in the fact that third place is quite a few points behind. This gap should allow Burling/Tuke the leeway they need to take some substantial risk in their pursuit of the leaders.

49erFX – Dutch close the gap on Brazil
Reigning 49erFX World Champions Annemiek Bekkering/Annette Duetz (NED) showed exactly why they are the team to beat. Through consistent sailing and the odd stroke of luck they put together a nine point day from the three races sailed to pull themselves to within 11 points of the Rio 2016 gold medallists Martine Grael/Kahena Kunze (BRA).

Tina Lutz/Susann Beucke (GER) continue to put together one of the most consistent regattas of their Olympic campaign, currently sitting in third overall with a scoreline including almost exclusively top ten results.

Nacra 17 – Outteridges take a fall
In the foiling Nacra 17 Lin Cenholt/CP Lubeck came out victors of the day with three consistent results, a feat no other top team can lay claim to. Meanwhile, Italians Bissaro/Frascari continue to lead overall. But the highlight of the day was the second race in which Billy Besson/Marie Riou (FRA) battled with Jason Waterhouse/Lisa Darmanin (AUS) on the final lap.

The French team, with four Nacra 17 world titles to their names, rounded the final windward mark with a slender lead over the Rio 2016 silver medallists. The Australians chose to gybe earlier than the French and through a combination of superior boat handling and speed managed to squeak over the finish line overlapped with Besson/Riou who had to settle for second.

The Olympic selection battle in the Nacra17 is at boiling point. The Australian team, Nathan and Haylee Outteridge, had a day that could spell the end of their selection hopes, as they tumbled to 12th overall and racked up a mountainous 52 points in just three races. Meanwhile, their team mates Waterhouse/Darmanin threw down a first and fourth (plus a discard) to put them into second overall and seven points off the lead.

The ongoing British saga is showing a similar story. European Champions Ben Saxton/Nicola Boniface (GBR) need to have a stellar finish to their regatta if they have any hopes of reeling in Gimson/Burnet who are tied for second with the Aussies.’

Italian dominators are struggling
The most winning team since the 2016 Olympics, Ruggero Tita/Caterina Banti (ITA), have set the standard since the Nacra 17 moved to the current foiling configuration. The reigning world champions are forced to watch their countrymen Bissaro/Frascari lead the regatta from back in an uncharacteristic position of 16th.

Bissaro/Frascari are regular top five finishers and will be pushing their case for the Italian selection process.

With such close competition between the teams, a medal on Sunday could double up as a ticket to Tokyo.