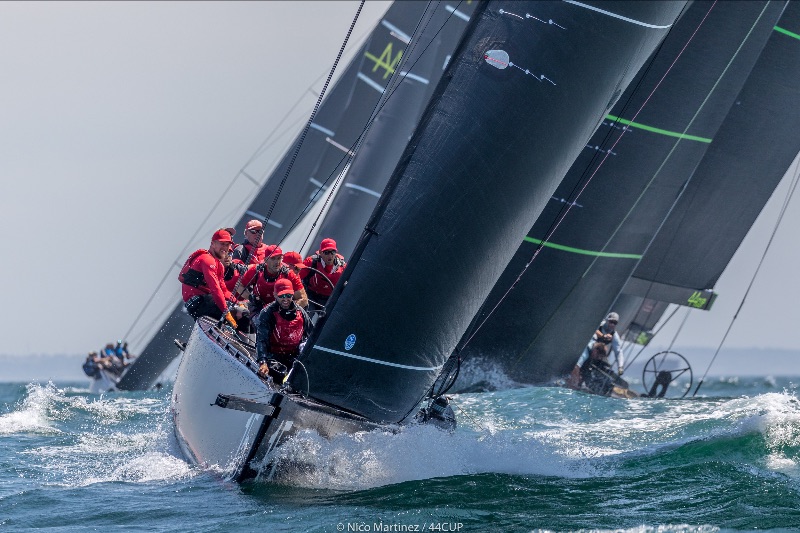 Portugal: Monaco-based Dutchman Nico Poons’ Charisma defied the odds to win all three races on the opening day of the 44Cup Cascais.

This annihilation of his ultra-competitive opposition comes after Charisma was on the ‘receiving end’, having suffered an eighth-place finish at the 2022 44Cup’s first event in Puerto Calero, Lanzarote back in February.

With the wind blowing down the Portuguese coast from the northwest, the forecast was for 13-15 knots, gradually increasing over the afternoon. In fact, the increase did not materialise with the wind only briefly hitting the teens, albeit enough for the eight RC44 teams to enjoy surfing down the Atlantic swell in blazing sunshine.

From the results it may appear Charisma had it all her way, but this was far from true.

Due to the geography here, the right typically pays on upwind legs, and it was usually those who bet hardest on this side of the course from the outset that prevailed.

In race one it was Team Aqua which led for the first lap, but Charisma cleverly put in a hitch at the end of the first run enabling it to split from Chris Bake’s team and take the starboard gate mark as Team Aqua went left. Continuing right allowed Charisma to pull ahead and then go on to take the first bullet from Team Aqua with Igor Lah’s Ceeref powered by Hrastnik 1860 fending off Hugues Lepic’s advancing Team Aleph.

Race two saw Torbjörn Törnqvist’s Artemis Racing prevail up the first beat to lead around the weather mark ahead of Team Nika with Charisma third. Once again persevering with the right more than the rest on the second upwind, Charisma edged in front of Team Aleph at the top mark with the Swedish team falling back to third. Good covering down the run enabled Poons’ team to score their second race win, helped when Team Nika was crippled with a broken port runner.

With adrenalin rising, in the third race Team Aleph and John Bassadone’s Peninsula Racing were over early and had to restart. Meanwhile Charisma and Team Nika, now fixed after her breakage, led the charge out to the right. Approaching the top mark Charisma had nosed in front with five other boats fighting to claim the water immediately astern. Charisma then sailed fast and safe to secure her third bullet ahead of Ceeref and Team Nika.

So, after her poor performance in the Canaries, how did this turnabout happen? “I don’t know – maybe it is just a bit more focus or whatever,” said Nico Poons, careful not to presume too much with three days of racing to go. “In Lanzarote we hardly had any wind but here we have good breeze and that makes a big difference. And we had good starts which helps. It felt good.”

Tactician and former America’s Cup and Olympic Laser and Star sailor Hamish Pepper was less committal about their success: “Nico and the guys sailed the boat extremely well around the track. We had some good starts and luck went our way: Like in the last race, Aleph and Peninsula were over early and it opened up our lane to go right – unfortunate for them, lucky for us. It was an extremely good day.”

As to the slightly one-sided racetrack in these conditions Pepper observed: “As you get up to the top of the course there is a bend to the right in this wind direction but Maria (Torrijo, the 44Cup PRO) knows that and she favours the pin to make it a bit more challenging. But it does change from race to race, and it is not a must to go right. It just depends on how filled-in the breeze is.”

Going into day two Ceeref is second overall, three points clear of Team Aqua with the 44Cup’s typical ultra-tight point score tying up the mid-fleet immediately behind her.

“Overall, it was good day,” commented Team Aleph’s Michele Ivaldi, who has former Rolex Farr 40 World Champion Alex Roepers helming this week standing in for Hugues Lepic. “In the first race we made two mistakes with our manoeuvres, but we came out with a solid fourth.

“The second race was really good because we were in fifth and our boat speed was good up the top of the second beat and we came out second. In the third we made an unforced error (OCS) – we did everything very well until 20 seconds to go, defended our position, got the position we wanted but just pulled the trigger two or three seconds too early. Once you are in the back it is difficult to get back.”

Racing resumes tomorrow at 1200 and concludes on Sunday.