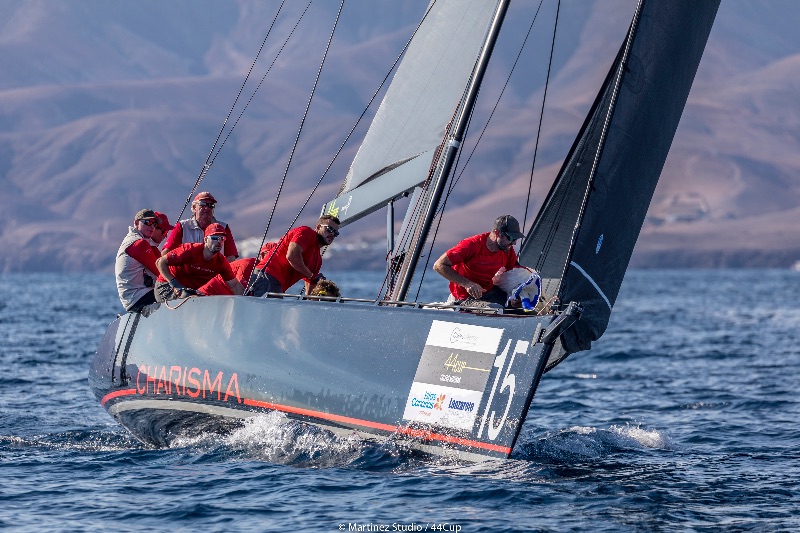 With a light-to-no wind forecast for the penultimate day of the 44Cup Calero Marinas Lanzarote, the weather gods did tentatively oblige, and after more than an hour’s wait ashore, a race did get going but was abandoned when the wind dropped away.

While the forecast didn’t look hopeful, the nine RC44 teams were patient and the race committee persevered and eventually were rewarded with one successful race when the wind filled in to 6-7 knots.

In this it was the immaculate Team Aleph that led around the top mark. But Nico Poons’ Charisma took the lead on the first downwind and then defended well to gain the Dutchman’s team its first bullet of the regatta.

“It felt good,” said Poons, once he returned to Puerto Calero. “We had some bad ones, so we needed that.”

Of the fortuitous first run, Charisma’s tactician [standing in for Hamish Pepper], Laser gold medallist, triple Moth World Champion turned America’s Cup sailor, Paul Goodison explained: “It was a bit like the first day. There was a little bit of current running [from right to left across the course].

“I didn’t want to be the last one to gybe, so I thought we would lead the gybe and as it was it was quite right shifted when we went and we had another leftie back at the end so we managed to gybe and cross them [Team Aleph]. Then we managed to get a few shifts right up the next beat and were able to extend a little bit.”

Two attempts to get the next race underway were both general recalled. The third attempt got away successfully under the U flag. Despite this Vladimir Prosikhin’s Team Nika and Igor Lah’s Ceeref powered by Hrastnik 1860 were both over early and with the prospect of another attempt to hold the race looking unlikely, both returned to port, leaving seven RC44s on the race course.

In this two-time Olympic Finn gold medallist Giles Scott called the shifts to perfection on board John Bassadone’s Peninsula Racing pulling out a commanding lead at the top mark. Sadly, approaching the leeward gate, the wind dropped, the race was abandoned and everyone returned to Puerto Calero.

This was good news for Prosikhin and Lah’s teams as the U flag start permits them to rejoin this race when the next attempt to hold it is made tomorrow.

A second place in today’s only race for Team Aleph, on which experienced keelboat owner-driver Alessandro Rombelli is standing in on the helm for Hugues Lepic, has left the French team holding an impressive nine-point lead going into the final day.

Another equally important battle to watch is for the overall lead in the 2021 44 Cup. In this Chris Bake’s Team Aqua is first, ahead of Igor Lah’s team by just two points going into this regatta.

Looking at the results in Lanzarote, at present Bake’s lead for the season’s title is looking secure with Team Aqua second at this regatta with Ceeref two points behind. To overturn this Igor Lah’s team have their work cut out, needing to finish second at the 44Cup Calero Marinas Lanzarote with Team Aqua fifth, or worse. Stranger things have happened in this fleet.