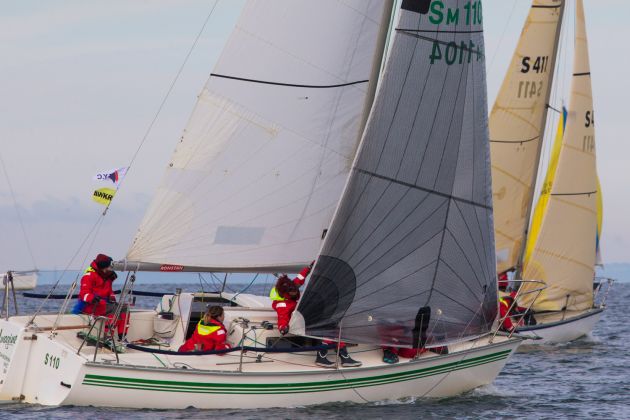 Racing wrapped up along the north-east edge of the vast expanse of Port Phillip at the 27th Australian Women’s Keelboat Regatta with a third and final light air day for the Queen’s Birthday public holiday, Monday June 12, 2017.

Wotherspoon helmed Envyus for the series’ second half, a different experience for the Cherub sailor from Lane Cove 12ft Sailing Skiff Club who summed up the regatta: “The highlight for us was that last race; I feel the whole team worked really well together. We had talked about the boat being a handful in heavy winds so we got really lucky as the breeze is coming up this afternoon. We wanted good starts and clean air and once we got away it all worked out. I’ll be back next year if I can; it was a really great weekend.”

AMS division two top honours went to the Townsville crew of Imaginer on a countback from their clubmates on another S80, Good Question. On the delivery trip back to Sandringham Yacht Club Imaginer’s skipper Renee Cordingley said, “Thanks to the Royal Melbourne Yacht Squadron for a great regatta. We definitely didn’t expect to do as well as we did. I am a dinghy sailor so one design is what I love; between that and the light weather I was in my element!”

For those boats racing under IRC handicap, final series results put Absolut in the division one box seat from the Monica Jones skippered Jungle Juice, an Adams 10 sailing under the host club’s burgee.

First in IRC division two was Tasmanian skipper Judi Marshall and her Recycled Reputation crew sailing for the Townsville Sailing Club with a combined Queensland and Tassie crew.

Tough class racing over six races in the 11-strong S80 division produced a close set of top three scores. Despite a solid crack at the top place by the Kiwi crew on Escape, Townsville’s Imaginer crew held off the international challenge by one point in the one design results. Third was Deb Parker’s Jack Tar from Hobsons Bay Yacht Club.

Some of the crew off Escape, which represented the Tauranga Yacht and Power Boat Club, have been waking up at 3am daily to watch the America’s Cup Playoff Finals then going racing all day. They are thrilled that as of Monday morning Melbourne time the Kiwis have four wins against two in the first to five knockout, and today they sent messages of support to the team and in particular TYPBC clubmate Peter Burling, the AC helmsman they’ve known since he was a boy sailing on the Bay of Plenty.  See video.

Organising committee spokesperson and immediate past RMYS Commodore Janet Dean was delighted with the turnout and the winding-back of weather compared to the last couple of years.  “It was dry and sunny instead of the heavy airs we’ve had in the last few years. We’ve noticed a high number of returnees bringing new crew and the spirit of competition and camaraderie was outstanding as always. Thanks to all the owners who loaned boats and the volunteers who made the regatta possible,” Dean added.

Competitors gathered at the RMYS in the late afternoon for the final presentation and cocktail party before the local sailors farewelled new friends and the many interstate and one international team prepared to board planes back to their hometowns, telling tales of tricky on-water competition, great hospitality and lots of laughs.