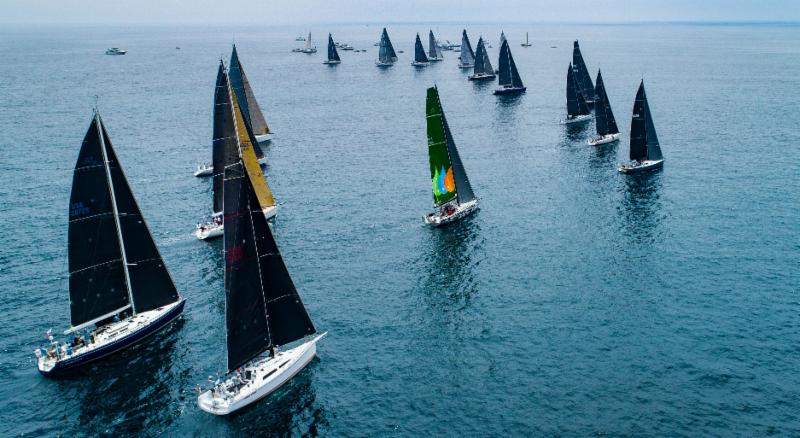 03/04/2020
LOS ANGELES, CALIFORNIA – The Transpacific Yacht Club is pleased to announce the next 2021 edition of the LA to Honolulu Transpac is now open for entry. This will be the 51st edition of this 2225-mile biennial ocean racing classic first raced in 1906, with the first of three starts scheduled for Tuesday, July 13, 2021 and the final awards ceremony to be held in Honolulu on Friday, July 30th, 2021.
“Amidst all the recent bad news about races being cancelled or postponed this season, we hope this early opening for entries will be good news for all ocean sailors interested in Transpac next year,” said Jim Eddy, Commodore of the Transpacific YC. “In fact, we already have our first entry within minutes of opening the site.”
This first entry is John Sangmeister from Long Beach, and this is not a coincidence. Race fans from last year's Transpac 50 will remember that Sangmeister and his team suffered a broken rudder on his modified Santa Cruz 70 OEX, then sank 200 miles offshore in their second night of this race, prompting a successful rescue from Roy Disney's Andrews 68 Pyewacket. Both teams returned to the coast safely on board Pyewacket, earning Disney and team last year's prestigious US Sailing Arthur B Hanson Rescue Medal for their heroic efforts.
“I love this race, the people, the adventure, the Aloha,” said Sangmeister, “I wanted to be the first to sign up to compete and complete what we did not finish last year.”
In the current circumstances he added, “To everyone we say Stay healthy, stay safe, be kind to one another. Looking forward to seeing everyone soon under happier circumstances. Aloha and Fight on!”

That Aloha spirit is often associated with Transpac not just due to the destination but also because the race itself is pure bliss for all ocean sailors, who in one race get to enjoy a wide sampling of weather conditions. The gentle westerlies at the start are followed by a few days of cold and wet high-speed headsail reaching in the coastal offshore northerlies, which then warm up and move aft into several more days of idyllic tradewind spinnaker reaching and running towards the iconic finish line at Diamond Head in Honolulu, where all that Aloha hospitality awaits.
Last year's 50th anniversary race was also wildly popular: after an open for entries started in mid-April 2018 there were already 50 entries by September, and by mid-February 2019 a whopping 100 entries. Eventually 84 monohulls and 6 multihulls crossed the starting line, a record number in the long history of this race. These entries came from not only from the US west coast, but all over the planet.
One was Quentin Stewart's mixed international crew hailing from Australia, Britain, Spain and the US on his Infinity 46r Maverick, a light fast offshore carbon race boat with an unusual feature: a horizontal appendage that slides to leeward to increase stability and thus harness more power in the sail plan, a device called DSS (Dynamic Stability System). Maverick relished the conditions, trading gybes with Swiss skipper Maximillian Klink's much larger Botin 65 Caro for miles and miles of boat-for-boat high-speed fun all the way to the finish line: Maverick finished only 32 seconds ahead in elapsed time after almost 8 days of racing.
“I did 20 transatlantic crossings and races by 2000 and then I waited until 2016 to do the 21st, and now 2019 for a first Transpac,” said UK-based helmsman Gordon Kay sailing on Maverick. “I will not be waiting so long again. There is something magical about the rhythm of this ocean race that is lost in the frenzy of a Fastnet.”
“For those that may have missed Transpac 50, now's the time to start thinking and planning for the next edition in 2021,” said TPYC Race Committee Chairman Tom Trujillo. “And for those that enjoyed last year's race, come back again for more next year, we would love to have you back.”
More details on the 51st edition of Transpac can be found in the 2021 Notice of Race posted on the Race Information page on event website: www.transpacyc.com.