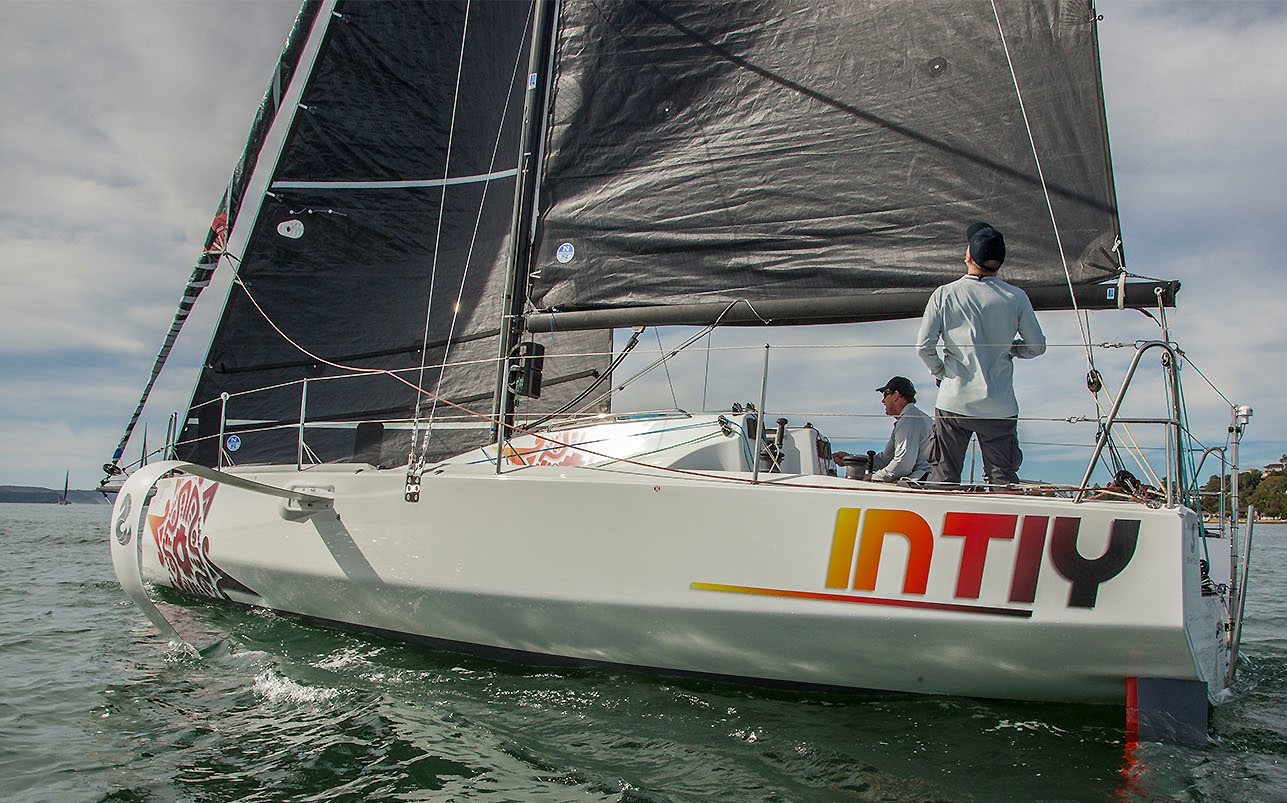 24 boats and over 140 sailors had eagerly waited for the 2021 Beneteau Pittwater Cup. Its arrival brought welcome sun, and much lighter breezes, raising the hopes for yet another brilliant event. There have been 20 of them, in fact, and it would have been a grand 21st anniversary celebration by Flagstaff Marine for all the Beneteau owners and crew, had it not been for that pesky virus thing forcing last year’s event to have a wee holiday.

With that said, it was certainly not overlooked by the happy attendees that they were enjoying something that the whole Beneteau clan the world over were very envious of, and there was certainly a moment’s silence to pay respect for that. What was also noted that back in the day it was known as the Metalmesh Cup organised by Flagstaff Marine’s Shane Crookshanks, and so generously supported for years by stalwarts Ivor Burgess and David Boekemann, who received a resounding round of applause when they were honoured and acknowledged with a beautiful bottle of Champagne.

Now the perpetual trophies for the Spinnaker and Non-Spinnaker Divisions are still the original metal mesh sculptures, and hold up well due to their inherent strength. They are also just as sought after today, as they were back then.

Clearly Shane has seen each and every one of the regattas take place, and commented, “It was fairly atypical today. We’ve probably had 18 of the regattas conducted in similar sort of wind. We do continue to see the entire Beneteau range out racing, from latest and greatest, such as the Figaro 3 that I was on, to the new First 27, along with some of the older First 40.7s and 47.7s, and also lots of new Oceanis product out there…”

“You know we had four Oceanis 38s battling it out – identical boats, so it comes down to who has the biggest bimini, or carries the most beer. In the end, the weather, the bragging rights all sort of fade away when you’re out on the water. It’s the camaraderie, the way the owners are – there’s throwing beers across from boat to boat, and common courtesy with drivers waving through a boat on port when they’re on starboard. It’s a very good thing, with simply likeminded people having a bit of fun together.”

To the racing then…

The start line ran between Lovett Bay and Clareville, with the aim to firstly get to, and then subsequently around Lion Island in the middle of Broken Bay. Given the conditions, this was bound to be a test for both the sailors, and also the race management from the host, the Royal Prince Alfred Yacht Club. Right was favoured early, and then left later on as they inched closer and closer to West Head.

It was about then that the decision was made not to go around Lion Island due the significant Sou’east swell that was running in through the mouth of the bay and ultimately smashing itself onto Pearl Beach on the Central Coast. Many a seasoned sailor was heard to say back at the dock, ‘Good call’, and it was, for the mainly Nor’wester did get to 8 knots at best a couple of times, but for the rest of the race it was more like 3-5, and quite often absolutely nothing. Not the time to be facing a lee shore and a kite hoist that may or not be filled…

Still, on the positive side of the ledger there was no rain, of which there had been plenty only 24 to 48 hours beforehand, along with fresh to frightening breezes. The sun was out early for the breakfast, had a wee cat nap thereafter, but did bring the fleet home in a blaze of glory, before the wind too decided to put the boat back in the pen and head to the bar.

Give me the results (please)!

The venerable First 40.7 with the unique dragon logo, Puff, won the prized spinnaker division. Her skipper is Scott Robertson, who commented afterwards, “I have had the 40.7 for just over a year, and she is a terrific boat. It was a good day for us. The winds on the day were light and fickle, and we were lucky to stay in pressure for most of the race. It was a slow work up to Lion Island, but we were able to get the kite up on the way back, all the way from West Head to the finish line.”

“We had a good tussle with Tailwind throughout the entire course, and got them by 10 seconds at the finish. Having my father Mike on board is an absolute bonus, as he has sailed on Pittwater for 45 years, so together with the rest of the crew who were all excellent, it all helped to keep us moving.”

“I am grateful to Flagstaff Marine, Beneteau and the other sponsors for their time and effort, also RPAYC deserves a thank you for their Race Management and hosting the presentation dinner.”

In second place in the spinnaker division was Shaw Russett’s First 45, Tailwind, and then in third it was David Boekemann’s Oceanis 46.1 First Line, Bombolo.

The First 40, Iago, won the non-spinnaker division. She is skippered by John Gibson, who said, “It was great fun for the IAGO crew to take both line honours, and first on handicap in Non-Spin Division, as we are all entering our seventh decade, but have been friends since our teens and twenties at University.”

In second place were Lindsay and Ann Thew, who took their very pretty Sense 50 (still one of my all time faves in the Beneteau Fleet), Struggling Sailsman 2, double-handed and efficiently around the non-spinnaker course with its weather mark just Nor’west of Barrenjoey Head. They sailed with a calmness very much akin to the conditions, and then carried this tranquillity over to the dinner as well. Their huge smiles, both on the water and ashore, gave away much more, and it is of little doubt that they will have their craft out for more fun very soon, indeed.

Third place went to one of the instigators of the event, Ivor Burgess, who has done all 20 of the regattas, the last few on his newest craft, the Oceanis 45, Still Dangerous. Always a delight to be around

The next is Matt Allport, the Skipper of Blizzard, who said, “Having grown up 90 kilometres away from the coast, I’d never been on a sailboat until December 2018. So it was a big step to go from that to recently importing the first of the new generation Beneteau First 27s into Australia through Flagstaff Marine. My goal was to have a suitable boat that I could sail singlehanded for when I just want to get out onto the water, and then also start club racing shorthanded through the RPAYC.”

“To skipper Blizzard through my first race, as part of the Beneteau Cup on The 8th of May was exciting, for with the light forecast I knew the boat would perform well. On the water, we were third over the line in our division, which had 18 boats in total. I find the boat quite responsive to any changes in trim and steering with its twin rudders.”

“We had the asymmetrical spinnaker up during the race, but there wasn’t enough wind to reach planing speeds, where it is the most fun. I’ve entered the boat in the RPAYC Winter Series starting in June, so I’m sure I’ll have some races soon where we can sail the boat to its potential.”

Wrap it up, then.

Flagstaff Marine’s co-owner, Graham Raspass, summed it all up by saying, “The thing that we were really pleased about was being able to get back to actually holding these regattas. Judging from the enthusiasm from our owners and their crews they were equally as pleased that we were all back out on the water, enjoying a day’s sailing, albeit in lighter breeze than perfect.”

“None the less, they all got around their respective courses, and then joined us for dinner and a lot of laughs, which is the pure essence of it all. It’s fair to say that the 20th was a success, and all are looking forward to 21st, along with all the other ones to come.”

Another pretty accurate observation was that all seemed quite keen to be down on the Harbour for the Sydney version of the Beneteau Cup that is to be held on October 22, 2021.