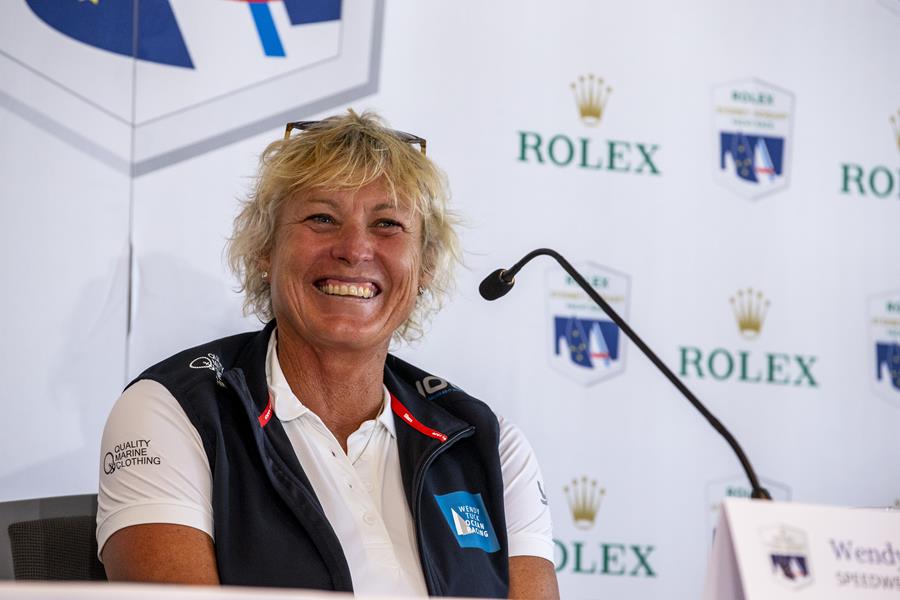 The 76th running of the Cruising Yacht Club of Australia’s Rolex Sydney Hobart Yacht Race will be different this year with COVID-19 restrictions in place around the world, however, it has not diminished the quality of the fleet; the chase for the Tattersall Cup as strong as it ever was and a new Two-Handed division has added a new element.

A fleet of 89 – representing NSW, Tasmania, Victoria, Queensland and South Australia is entered for the annual 628 nautical mile race. The only international entry is the super maxi Black Jack representing Monaco.

At the fast end of the fleet are two super maxis; Christian Beck’s InfoTrack joins Peter Harburg’s Black Jack. Meanwhile, eight TP52s, among them Matt Allen’s defending champion Ichi Ban, will join others in the 50-60 feet range vying for the Tattersall Cup.

When asked about the possibility of a three-peat, Matt Allen revealed that his team “… quite enjoys the pressure and looks to improve the boat’s performance year-on-year”.

The weather may favour the larger end of town and the pressure will be on with so many grand prix yachts in the 60-80ft band. Phil Turner’s 2018 overall winner, the RP66 Alive (Tas) will lead the charge.

A new Two-Handed division has also been added to the race, and those entered have a chance to take out the inaugural line honours trophy, along with trophies for the overall winners under IRC and PHS.

Hot to trot for the inaugural line honours trophy is Rupert Henry’s Burning Palms. The NSW yachtsman will race his J/65 with Greg O’Shea, the friend who helped him sail his former yacht to a clean sweep of IRC, PHS and AMS wins, line honours and a new race record in the 2018 Melbourne Osaka Double-Handed Yacht Race. They are the benchmark and will be formidable.

Among those vying for Two-Handed IRC  honours are Wendy Tuck/Campbell Geeves with the Beneteau 34.7 Speedwell. At 9.9 metres, it is the second smallest boat in the race, but Tuck has an enviable record. The only woman on the planet to win an around the world yacht race and one of only two to twice win the Jane Tate Memorial Trophy (awarded to the first female skipper to finish the Sydney Hobart each year), she has done 13 Sydney Hobarts.

When asked why she chose to enter the two-handed division this year, Wendy acknowledged that she likes to continuously challenge herself but would need to remember to “.. stop walking after 33 feet or otherwise I’m going to get really wet”. She stressed the importance of looking after yourself and your partner in two-handed sailing. She even made up a new word to describe sailing for hours without sleep: “Slangry – when you’re sleepy, hungry and angry”.

Tasmania’s Rob Gough/John Saul are also highly fancied. In his heyday, Gough was a windsurfing world champion and Moth Masters world champion, has major wins on the board in the SB20 keelboat and raced to Hobart with Saul on Oskana last year. Saul was also one of only 44 finishers in the 1998 Sydney Hobart with his boat Computerland.

“In this unusual climate we are pleased with the number and quality of the fleet,” CYCA Commodore, Noel Cornish AM said.

“It will be as difficult as ever to win the Rolex Sydney Hobart Yacht Race and we have the new Two-Handed division, which adds another dimension to our blue water classic. In 2020 we are also celebrating 75 years of women in the race and have an excellent representation across the board to mark the occasion,” the Commodore ended.

To that end, the oldest boat in the fleet, Annie Lawrence’s Solveig, adds something special. The famous Halvorsen 36 was designed and owned by Trygve Halvorsen and built in 1950 by his brother Lars. Trygve and older brother, Magnus, raced her to Hobart five times from 1950. They took line honours in 1953 and finished second overall, then won the race in 1954.

Lawrence, a 15 Sydney Hobart race-veteran and respected navigator, has stripped the boat back and restored Solveig to her former glory.

Helping send Lawrence and the rest of the fleet on its way on Boxing Day are Vanessa ‘Duds’ Dudley and Gail Harland who will fire the five minute and 10 minute warning signals. Dudley, a gifted helmswoman, has contested 23 Sydney Hobarts, her most recent on Wild Oats X when it finished second overall in 2018. Harland has competed in 22 races as a trimmer and can claim the distinction of winning the 2003 race on First National.

Since 2003, the historic replica start cannon has been fired by someone who has won the race 50 years previously. This year that duty falls to Bruce ‘Gouldy’ Gould, who was aboard Pacha when it won in 1970. Gouldy was also aboard Vengeance for her line honours victory in 1981 and on Sovereign for the line and overall double win in 1987.

Smallest in the fleet is the Army Sailing Club’s Gun Runner. At 9.2 metres, the boat is used to train its personnel and teaches the Army values of courage, initiative, respect and teamwork.

The Boxing Day start of the Rolex Sydney Hobart Yacht Race will be broadcast live on the Seven Network throughout Australia and Live-and-On-Demand on the 7plus app.

For full list of entries and all information: http://rolexsydneyhobart.com/