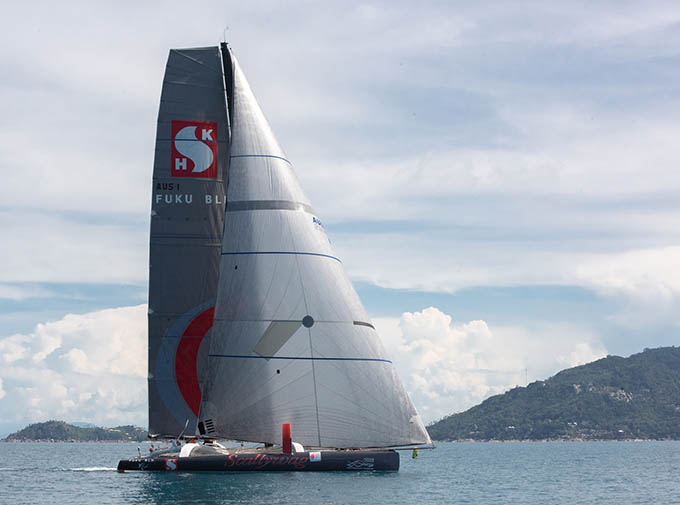 Samui, Thailand: The Premier and Cruising classes got to stretch their legs on today's Mount Gay Rum race day, racing along the south-east coastline to Lamai Beach and back, while IRC Zero and IRC 1 added windward/leewards to their race card bringing their series totals up to seven and six races respectively, with just one day to go.

Ray Roberts and his team worked hard on yesterday's Lay Day to get Team Hollywood (AUS) back on the racetrack today after their unfortunate incident with WindSikher (SIN) on Day 3. Sadly, WindSikher have retired from the regatta and it's now a five-boat shoot out in IRC Zero.

Team Hollywood didn't help their chances of knocking the Whitfcraft THA72 off their regatta winning streak (four consecutive Samui Regatta wins) in race one today when they sailed into a hole and lost ground.

Trying to make up ground proved tough, and they had to settle for third. Zannekin (HKG) saw the opportunity and sailed a clean race to claim second behind THA72. Zannekin's second place splits the points and helped open up a gap in the standings between THA72 at the top and Team Hollywood in second.

In the second race, the softening breeze proved tricky for all but it was Team Hollywood which sailed the course best to finish with a double; line honours and win corrected time. THA72 claimed second ahead of Zannekin in third.

Mandrake III (HKG) is building a picket fence in IRC 1. Comfortable leaders coming into today, they added another win in the only race of the day and extended their unbeaten run to six races.

Meanwhile, Fujin (AUS) went a long way to securing second overall with a second place today. Her nearest rival, Tenacious (AUS), slipped back to finish fourth today behind Over There (THA) and they now sit six and seven points behind Fujin respectively in the overall standings.

At the beginning of the regatta, one of the crew on Bella Uno (MAS) said it was their regatta to loose, adding that light airs were their forte. It appears the crewman was right, as Bella Uno added another bullet (four from four) to her IRC Premier Monohull Division tally and looks unbeatable.

Moonblue 2 (HKG) and Lawana (THA) have traded places over the week and after today's coastal race it was Lawana who placed second and now leapfrogs Moonblue 2 in the overall standing.

The crew of Scallywag Fuku Bld 60 have been patiently waiting to unleash their power all week and finally, today, we got to see a glimpse of the boat’s potential. It wasn't long before they were leading the pack as she chewed up the coastal course and crossed the finish line almost 50 minutes ahead of the next boat in NHC Premier Open Division – to score her first win (by almost 20 minutes) of the series.

A win in today's IRC Cruising for Graffiti (THA) see them go into the final day with a two point lead. MoonShadow2 (THA) have an uphill task to claw back two points on the final day, meanwhile SailQuest Hi Jinks (USA) will be looking to return their first race of the series winning form.

Full results and all information: www.samuiregatta.com