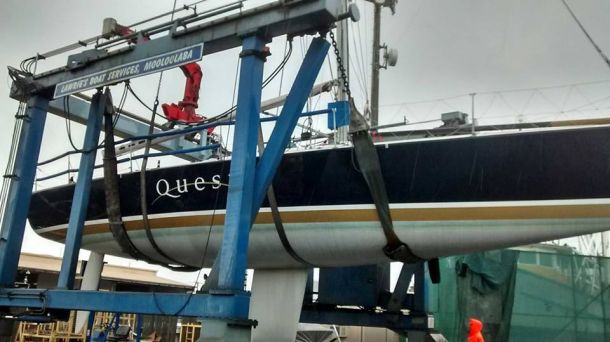 Quest, one of the few boats which completed the horrendous 1998 Sydney – Hobart Yacht race was today lifted from the water at Mooloolaba to make final preparations for the Sunshine Coast Yacht Club’s 2015 SCOR/IRC Qld State Titles to be held 4th to 8th July 2015.

Bill Coward says that it is great to see sailing competition being strengthened on the Sunshine Coast with the reintroduction of SCOR.  Bill said “We will be entering Quest into both SCOR and IRC this year as we really want to put her through her paces”.

The events will be held in the coastal waters off the Sunshine Coast between Noosa and Caloundra. The SCYC is inviting owners of suitable racing and cruising yachts, multihulls and sport boats to enter the two events.

Berths for visiting competing boats at Mooloolaba Marina will be available for the period of the event at no charge.

If you are interested in being part of SCOR 2015 and the Queensland IRC State titles, please return entry form and the entry fee to the SCYC Regatta Office, by 1700 hours on July 3rd, 2015.

All relevant documents can be found at www.scor.net.au.