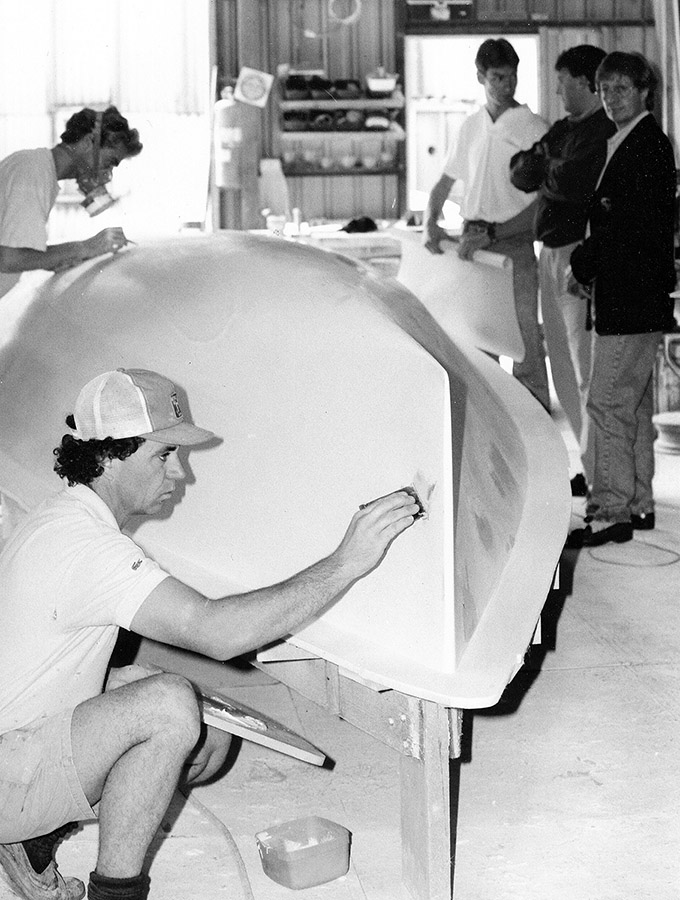 League's Anthony Reynolds with the first of the one-design hulls.

From the moment James Joseph Giltinan conceived the idea of having a Worlds 18 Footer Championship, and the Australian 18 Footers League conducted the first championship regatta for the trophy, on Sydney Harbour in 1938, the League has always been at the forefront of the sport’s worldwide promotion and development.  The JJ Giltinan world Championship has always been its major vehicle.

Following Giltinan’s death in 1950, the League was determined to keep alive his dream of a world championship for 18 Footers, and since the 1960s, the club’s administrators have supported regattas in the USA and Europe to help promote the growth of 18-Footer racing.

Their efforts were rewarded and, by 1979, seven countries (Australia, New Zealand, Fiji, USA, UK, France and Italy) had been represented at the JJ Giltinan Championship.

The combined League and Sydney Flying Squadron fleets of 30-40 skiffs in the 1970s had fallen dramatically and international expansion stalled throughout most of the 1980s.

The large sponsorship levels of the 1980s demanded that Sydney boats must compete for the major championship on Sydney Harbour each year, and the previous rotation system between the three 18 Footers centres was not possible as there was no longer regular racing in the traditional areas.

It also became the League’s responsibility to take up the challenge of getting the local competition numbers back on track as well as keeping alive James J. Giltinan’s dream of international expansion.

The first move to rationalise the cost of top level competition came from the talents of Julian Bethwaite, who produced a competitive boat for a fraction of the cost of the skiffs of the 1980s.

Bethwaite refined his original design and, in 1990-91 produced AAMI which won the 1991 Giltinan Championship.  A second boat followed for the 1992 JJs and was also successful, which told those responsible for the sport’s future that the new concept was the way of the future.

Despite the cost involved to the Australian 18 Footers League, club administrators realised that urgent measures were necessary to ensure the future of the then 100-year-old sport, and a totally new concept was necessary to re-generate interest at all levels.

Under the presidency of Anthony (Tony) Reynolds, the League’s Board of Directors were determined to rationalize the cost and the competitiveness of both local and international competition, and they introduced an entirely new set of rules for the future.

Basis of the new rules is a ‘one design’ hull, designed by Iain Murray, Burns & Dovell, as well as a reduction in the number of rigs, and sails, that each boat could use each season.  The club registered a single class boat builder and became the owner of all hulls produced from the mould.

The result of the Australian 18 Footers League’s policy has been spectacular and given the other 18-Footer areas the opportunity to succeed at the highest level.

Prior to the rule changes, only seven New Zealand teams had been successful at the 42 JJ Giltinan world Championship regattas conducted to 1993.  There had been no winners from any of the other seven countries which had competed.

Over the past 26 years, there have been two JJ Giltinan Championship winners from the UK, two from the USA and three from New Zealand, and there have now been 21 countries represented.  A further bonus came in 2013, when two female teams became the first all-female teams to contest the premier event.

Tony Reynolds’ determination, to turn the sport’s fortune around from the excessive spending days of the pre-1990 era, was a critical factor in the League’s ability to introduce a revolutionary change.  His business acumen was another key factor which enabled the League to fully fund the program for the future.

The success of the Australian 18 Footer League’s clubhouse, situated at Double Bay on Sydney Harbour, has enabled the League to continue to fully fund the racing, despite the challenging times.

It might not have been enough to stop the Kiwis taking the top prize again, but the League is looking forward to announcing the line-up for the coming season, as the best Aussie skiff sailors look forward to head-to-head domestic competition before taking on the internationals again.

Current Australian 18 Footers Leagues’ President John (Woody) Winning has been a central part of the club’s program over the full 16 years of his presidency.

Over many years, his family’s The Winning Group has actively encouraged many of its client companies to become skiff sponsors.  A move which has been critical to the future of the sport and the League’s fleet.

Woody, along with the late Bob (Killo) Killick, also had the vision of presenting 18ft Skiff Racing on Sydney Harbour to the world, now the AeroMedia Live Broadcast video team are making sure it happens with the live streaming of all races throughout the season and during the Giltinan world Championship regatta.