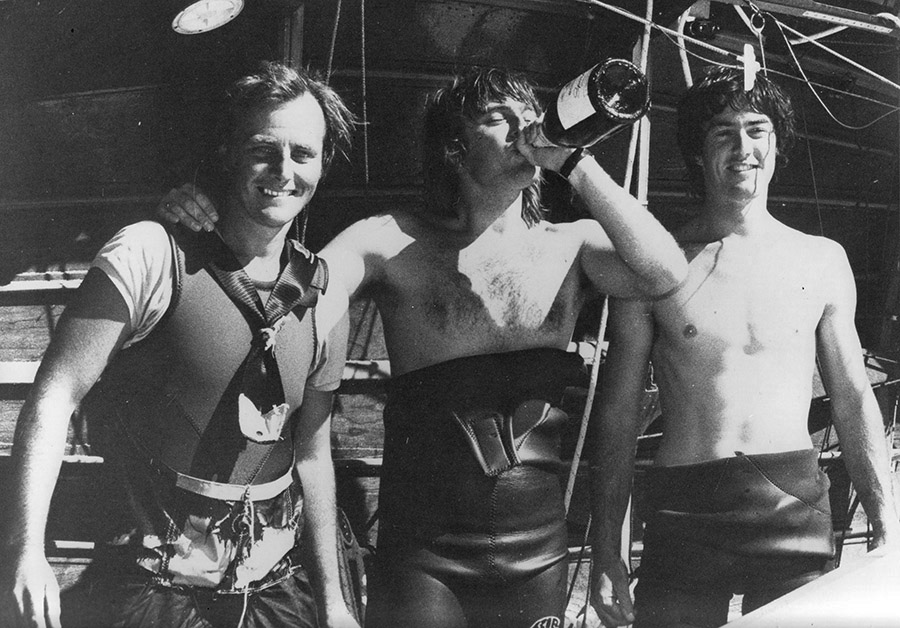 The winning Miles Furniture after the 1976 JJ victory.

The 128-year history of Australia’s 18 Footers is famous for having generations of a family competing over many years.  Occasionally, even two generations are competing together or against each other at the same time.

What sets the Kulmar family apart from the traditional ‘family’ involvement is their unique achievement at the 1976 JJ Giltinan World Championship when their skiff, Miles Furniture, took the title on Sydney Harbour.

Miles Furniture was designed by the Kulmars and built by the late Les Kulmar (father), with assistance from brothers Stephen and Paul Kulmar, in the garage under the family home.  Stephen Kulmar was the skipper, Paul Kulmar was in the bow, and their brother-in-law Paul Ziems rounded out the team as sheet hand.

The path into the 18s for Stephen and Paul Kulmar was typical for young sailors.  They began in Sabots, graduated to Manly Juniors, then to Flying Elevens (1966-67 Season) before Stephen later moved up to the 12ft Skiffs while Paul elected to stay in the Flying Elevens.

The 12ft Skiffs in the 1970s was extremely strong in numbers and talent, but the Kulmars managed to reach the top.

According to Stephen Kulmar, “Over the four seasons from the 1970-71 Season, we designed, built, rigged, modified and sailed a new 12ft Skiff.  We were encouraged to explore new concepts, but it wasn’t until the 1973-74 Season, when we took a completely radical approach with a tiny deep V stitch-and-glue design (which we built in one weekend) that we really broke through.”

Despite the presence of competitors like John Winning, Iain Murray, Michael Coxon and Rob Brown, the Kulmars took out all the major titles.  Stephen remembers, “Vagabond was unbeatable right from the start, winning the NSW (Sydney Harbour), Inter-Dominion (Auckland Harbour) and the Nationals on the Parramatta River, all in one season.”

Hardly surprising, the Kulmars decided to move into the 18s the following season.

Stephen explains,  “We decided to move up to the 18 Footers and try our luck in the ‘big league’.  Paul Ziems, our brother-in-law joined us from a successful career in the 16 Footers.”

“We managed to find a wonderfully supportive sponsor, Laurie Miles of Miles Furniture, who was a harbour-side local and loved following us around the course on his powerboat.  Miles Furniture was very much a family business, and the synergies and culture were very compatible with the Kulmar family value.”

“Another important member of our team was the famous surfing photographer and Miles Furniture’s Ad manager Jack Eden, who took on the additional role of covering the 18 Footer during those halcyon times.”

“Our first Miles Furniture was an attempt to upscale our thinking, taking the deep V Vagabond stitch-and-glue idea into an 18 Footer.  We also added an aluminium frame for structural support that included external wings.”

“We again built the hull at home in the garage, and rigged her on the front lawn (avoiding the telegraph lines) as we did with all our boats.  We also continued to work with Bruce Hewish, our sailmaker from the 12 Footers.”

“Our first attempt wasn’t right.  The boat was too small and lacked power under 15-knots, but our sponsors were happy with our efforts and prepared to go again.”

The highlight achievement of the team’s 18 Footer career came only after finely planned design, then on-going development throughout the 1975-76 Season.

“To compete and win, we needed to re-think and take a more evolutionary approach to match the Bruce Farr-designed KB, which was sailed superbly by the great Dave Porter.”

“We thought we could go one better with a slightly smaller, lighter, flatter boat.  We spent the winter months in the workshop garage at home, designing and building our second Miles Furniture.”

The just reward for the meticulous planning, building and on-going development of the boat was a victory in the 1976 JJ Giltinan World Championship on Sydney Harbour, when the Miles Furniture team defeated the defending champion Dave Porter, in KB.

The regatta was sailed in light winds on most race days and defending champion Dave Porter started impressively in KB with a 2m win over Miles Furniture in race one.  Though not noted for her ability in very light winds, Miles Furniture fought back with two wins over the next three races and went into the final race needing to finish no worse than one placing behind KB to take the championship.

A big crowd watched the final race and they weren’t disappointed as Miles Furniture and KB had a great battle throughout.  David Griffiths’ Ansett Airlines narrowly won the race, ahead of Miles Furniture, but her second placing was enough to give the Miles Furniture team the championship victory.

It was a marvellous effort from the team, which also won 4 of the 5 heats, to take out the Australian Championship on the Brisbane River just one month before the worlds.

Stephen Kulmar points out, “the quality and quantity of the fleets we sailed in was full of talent with the likes of the McDell brothers and Russell Bowler of New Zealand, along with Dave Porter, Mike Chapman and Dave Griffith, pushing us in the Sydney fleet.”

“In all, the family designed and built five 18 Footers, four 12 Footers, a Flying Eleven and a Manly Junior, in the family garage workshop in Hunters Hill.  We rigged them all on the front lawn of the family home, avoiding mum’s roses and overhead telegraph lines.”