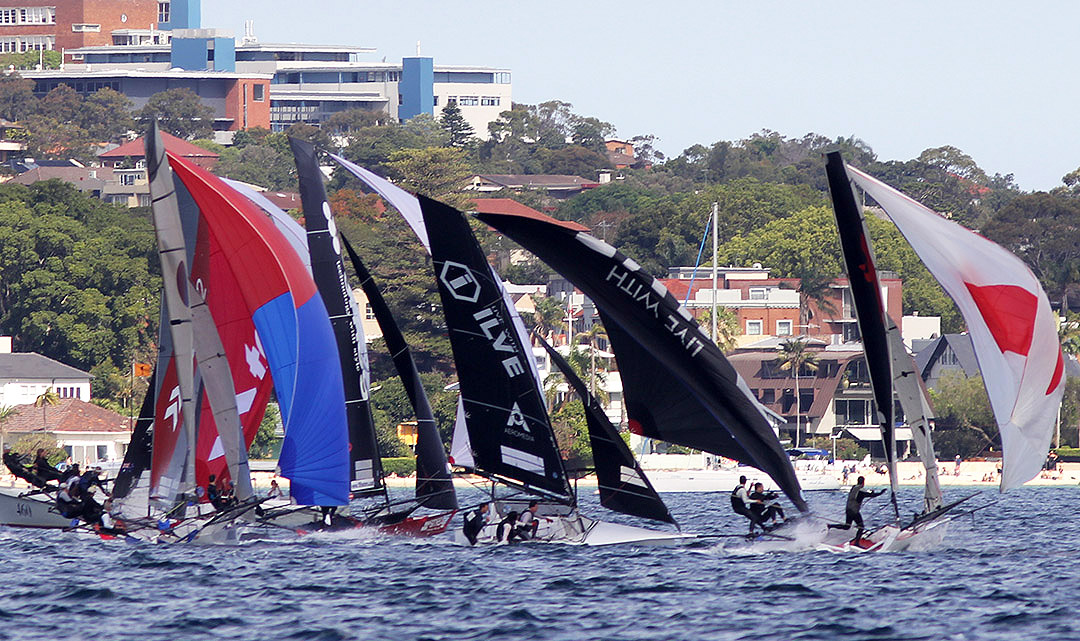 Congestion near the wing mark.

12/10/2020
The 2020-2021 18ft Skiff Racing Season began on Sydney Harbour today when the Australian 18 Footers League conducted Race 1 of the annual Spring Championship series.
A fleet of 17 teams lined up for the start in a 12-15 knot breeze over the North-East 3-buoys course, with most teams electing to use their bigger #1 rigs for the day.
It might have been a new season but it was a familiar sight as two of last season's top contenders battled it out for victory.
The Oak Double Bay-4 Pines team of Aron Everett, Courtney Mahar and Charlie Gundy showed it had lost none of the 2019-2020 Season form with a 17s win over the current Australian champion tech2 team of Jack Macartney, Charlie Wyatt and Lewis Brake.
The rookie Shaw & Partners Financial Services team of Jim Colley, Sam Phillips and Shaun Connor showed that they will be a very competitive combination after finishing in third place today, 3m50s behind tech2.
Another rookie team led by Tom Cunich finished fourth in Vintec, followed by Smeg (Dave O'Connor) and Winning Group, skippered by Seve Jarvin.
Following an even start, the long windward leg from Clark Island to the first set of three buoys off the Beashel Buoy produced some great racing with several teams challenging for the lead.
Ilve (Pedro Vozone) took advantage of going to the red buoy to grab the lead from Bird & Bear (Micah Lane) which had to round the blue marker.
The pair were followed by a large hard-charging group consisting of The Kitchen Maker-Caesarstone (Jordan Girdis), The Oak Double Bay-4 Pines, Smeg tech2, Shaw & Partners Financial Services and Yandoo (John Winning).
In an exciting spinnaker run to the wing mark off the southern end of Shark Island there was plenty of action and saw a lead change as The Oak Double Bay-4 Pines narrowly led tech2 and Yandoo as the trio prepared for the next run between Shark and Clark Islands to the bottom mark.
tech2 grabbed a 10s lead over The Oak at the end of the first lap with Yandoo in third place, followed by Noakesailing (Sean Langman), Bird & Bear and Shaw and Partners.
The two leaders elected to sail different courses back upwind to the Beashel Buoy and there was little between them as they approached the buoys.
This time, The Oak Double Bay-4 Pines gained from a blue buoy mark rounding while tech2 had to travel further to the white mark.
It was all that the leading team needed as they maintained a good lead back down the middle of Sydney Harbour on a spinnaker run to the bottom mark.
The leader seemed to sail a more conservative, safety-first race over the final lap of the course to hold off a very strong challenge by the Australian champion tech2.
Typically, there were a few 'swims' as the teams brushed out some of the cobwebs after the winter break, but there were a few promising performances from some of the new teams as well as better performances to come from some of the more experienced teams.
Race 2 of the seven-race Spring Championship series will be conducted next Sunday, October 18. Spectators can follow the racing on board the club's spectator ferry, however due to the COVID-19 policy, numbers are limited. Booking online through the club's website www.18footers.com is essential.
For those unable to make it out onto the water, AeroMedia Live Broadcast team will be on Sydney Harbour to capture all the action and live streaming is available at www.18footers.com by clicking on the '18 Footers TV' link.
– Frank Quealey, Australian 18 Footers League