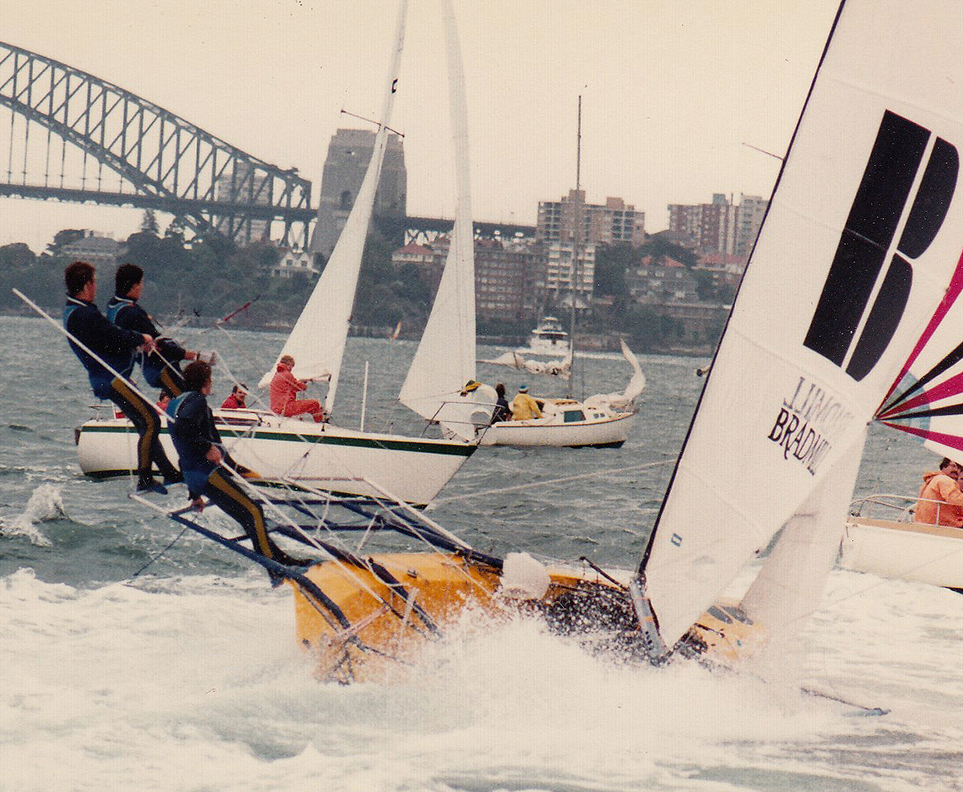 Bradmill in action on Sydney Harbour.

Julian Bethwaite has an incredible record of achievement in 18ft Skiff Racing as a designer, builder and competitor in both the northern and southern hemispheres.

He designed, built and skippered two JJ Giltinan world Championship-winning boats, AAMI in 1991 and 1992, and has the unique record of also being in the bow with Rob Brown’s 1996 Giltinan world champion, Entrad, at Auckland, NZ in 1986.

Since retiring from the 18s, his design skills continued to break new ground and he is the man responsible for his 49er design being the one which introduced skiff racing to the Olympics in 2000.

Julian is the youngest member of one of Australia’s most successful sailing families.  His father (the late) Frank was a prolific designer and authority on wind patterns, brother Mark was a two-time Olympian and world champion in J24s and Solings.  His sister, Nicki was a multiple world champion and in 1976 won the world Cherub Championship with Julian.  She also represented Australia at the 1988 and 2004Olympics.

The first 18ft skiff Julian designed and built for himself was Bradmill Stubbies for the 1979-1980 Season.  It featured an over-rotating rig, had a 10ft beam (extreme for those pre-wing days) and was built of polystyrene foam and epoxy.  It was a rare ‘failure’ for the talented designer, who commented “it was an interesting learning curve.”

A follow-up Bradmill, for the 1980-1981 Season, was much more conventional.  It was built from Kevlar-foam sandwich and featured wing extensions, which had been introduced to the 18s.

A huge change came to the 18s in the 1982-1983 Season when Julian designed and skippered the first of his two-handed Prime Computer skiffs, although the boat had to contest all major championships with a three-man crew to comply with the 18ft Skiff Class Rules.

The boat was a stretched version of Frank Bethwaite’s Taser dinghy and was built in a fibreglass foam sandwich.  It had only two rigs (compared to the four being used on the other 18s), and cost around thirty per cent of the money being spent on the top 18s at the time.

Prime Computer (Mk II) followed in 1983-1984.  This hull was built from strip-planked balsa over a male mould, and adopted the new style bowsprit pole, which had just replaced the conventional poles previously being used.

Bethwaite, with crewman Michael Wilson, proved very competitive, particularly in winds below 12-knots, and finished sixth (including a race win) in the 1984 JJ Giltinanworld Championship on Sydney Harbour.

The success of Prime Computer (Mk II) led to a (Mk III) being built for the following season.  This hull had an even finer entry than the previous design, and was built from strip-planked balsa, sealed with S glass.

According to Bethwaite, “It was ridiculously light (45kgs, not including fittings and wings), and had 1mm aircraft ply frames.”

Champion 12ft Skiff sailor, Craig Ramsden made his 18s debut as for’ard hand on the skiff, which finished sixth in both the JJ Giltinan and Australian Championships.  Unfortunately for the team, the ever-increasing wing width on the three-handers reduced the competitiveness of the two-hander.

At the end of the 1983-1984 Season, the class banned two-handers, so Julian decided to join Rob Brown and Matt Coleman on the Entrad team, which won the 1986 JJ GiltinanChampionship in Auckland.

Julian’s B18 designs of the late 1980s-early 1990s totally revolutionised the design of 18ft Skiff Racing.  The massive sponsorships, multiple rigs and ‘big’ hulls became unnecessary as the Bethwaite hulls dominated racing in both the traditional and Grand Prix Sailing fleets.

In 1990, AAMI Insurance Company’s General Manager Brian Keane was interested in having his company associated with such an iconic Australian sport as 18ft Skiff Racing, and was introduced to Julian, who had just built his latest skiff.  The pair immediately formed a wonderfully successful team, both on and off the water.

The success was instant.  Bethwaite and his team won the 1991 JJ Giltinan title and Julian is quick to point out “we finished first or second in every event that season and had the TV Grand Prix Sailing series won with an event to spare.”

A new AAMI skiff was launched for the following season and won the 1992 Giltinan Championship, giving Julian his second victory, as a skipper, in the premier championship.

With another new AAMI built for the 1992-1993 Season, Julian won the Grand Prix Sailing circuit, then sailed as sheet hand for Scott Ramsden on AAMI in GPS 1993-1994 before retiring from the 18s due to increasing work commitments relating to his 49er class design.

Following the League’s decision to go with a new Iain Murray design for all future boats, Julian decided to concentrate on the European scene, and by the mid-1990s, the Bethwaite family’s Starboard Products was building B18s to contest the European Championship events.

Julian had progressed his 18 Footer design through the 1990s to the Grand Prix Nokia, then to the pinnacle, Looney Tunes design.

Looney Tunes, which Julian built for a Hong Kong-based skipper named Robin Johnson, featured solid wings and a wishbone-rigged mainsail to exert more downward pressure from the mast to the boom.

According to Julian, “Looney Tunes had a lot of innovative things that later went into the 49er.”

While Julian has moved on from the 18s, he still has a keen interest in the club’s racing and follows it regularly from a harbour-side vantage point watching his son Harry compete.

Like dad, Harry Bethwaite is also a winner, having teamed with James Dorron and Trent Barnabas in Asko Appliances to win the 2018-2019 Australian Championship.