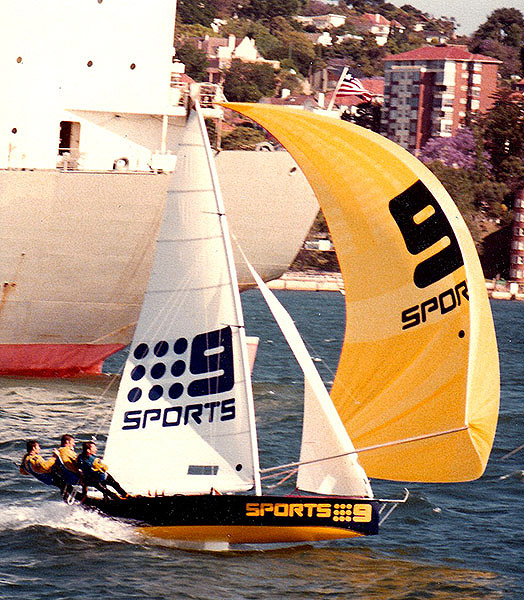 David Porter became the 1975 JJ Giltinan world 18ft Skiff champion when he skippered KB to a brilliant victory on the Brisbane River, but fortune didn’t always smile on the great sailor.  Aside from the lone 1975 victory, David was runner-up on five other occasions between 1973 and 1979.

Despite his lack of good fortune in some of the regattas, David doesn’t complain and simply says how ecstatic he was to win the 1975 championship with team mates Bob Ferris and Bob Tearne.

“It was the first time any of our crew had won the championship so it was very special to each of us.  We knew we had a good boat and crew and we prepared thoroughly for the regatta on the Brisbane River.

“We capsized in Race 1 and finished only seventh, but we soon got back on track and won the remaining four races of the regatta.  We partied hard and long afterwards.”

While David was reluctant to say he had bad luck, the fact remains, on at least two occasions it was a matter of how he lost, in 1977 and 1978.

Any recall of his career in the 18s should focus more on the positives of a wonderful career.  In nine seasons, he was six times in the top two placings at Giltinan Championships.

Like many 18 Footer champions, David joined the class in the 1970-1971 Season after winning the Inter-Dominion 12ft Skiff Championships with Aussie in 1966 and 1967.

With financial help from his father (David, senior) his first 18ft Skiff also carried the Aussie name, which was the name carried by his father on his successful 12 Footer in 1930.

The Aussie hull was designed by John Chapple and beautifully built from cedar veneer by Ian Perdriau.  The bare hull, including decks and buoyancy tanks, weighed 170 lbs.

Although Aussie won two races at the 1971 Giltinan regatta in Auckland, unfavourable conditions resulted in two DNFs, which proved too costly in the overall result.

The following year, the family business supported the campaign and the boat raced as Porter Marine.

It wasn’t until the 1972-1973 Season before KB came along to support his campaign.

Although he doesn’t admit it, Dave Porter and KB was an awesome combination over the next six years.

The 1977 and 1978 JJ Giltinan world Championships must make him wonder about luck, and what might have been.

With a lead of 5½ minutes over Iain Murray (his nearest rival in the championship) at the final rounding mark at Auckland in 1977, Porter and the rest of the fleet elected to sail a safety-first course to the finish in a 20-knot northerly wind and big seas.

Realising he had nothing to lose, Murray pulled off the ‘impossible’ when he decided to sail the direct course to the finish and grabbed the title away from Porter.

As if that defeat wasn’t bad enough, the following year Porter was incredibly unlucky before losing to Murray in a sail-off on the Brisbane River.

After taking a strong grip on the series with wins in each of the first two races, Porter’s KB suffered a broken mast in Race 5 and was forced to use a borrowed rig in the sail-off. KB took an early lead, but when Iain Murray’s team set a brand new super-lightweight spinnaker on Color 7, the KB crew could do nothing but watch as Color 7 sailed past to victory.

Regardless of his Giltinan Championship disappointments, during the 1970s, David proved himself to be one of the greatest 18 Footer sailors in the sport’s history and, in his gold-coloured KB skiffs, was The King of Sydney Harbour.

NOTE:
The Australian 18 Footers League are conducting a survey of current and past 18's sailors, spectators and aspiring 18ft skiff sailors. We want to ensure that we deliver an exciting sport that accommodates the changing needs and interests of both sailors and spectators. Your ideas and opinions are important to us and we would be most appreciative if you could please spare a few minutes to fill out our survey.
Survey link below:
https://www.surveymonkey.com/r/8PKLHG
– Frank Quealey, 18 Footers League