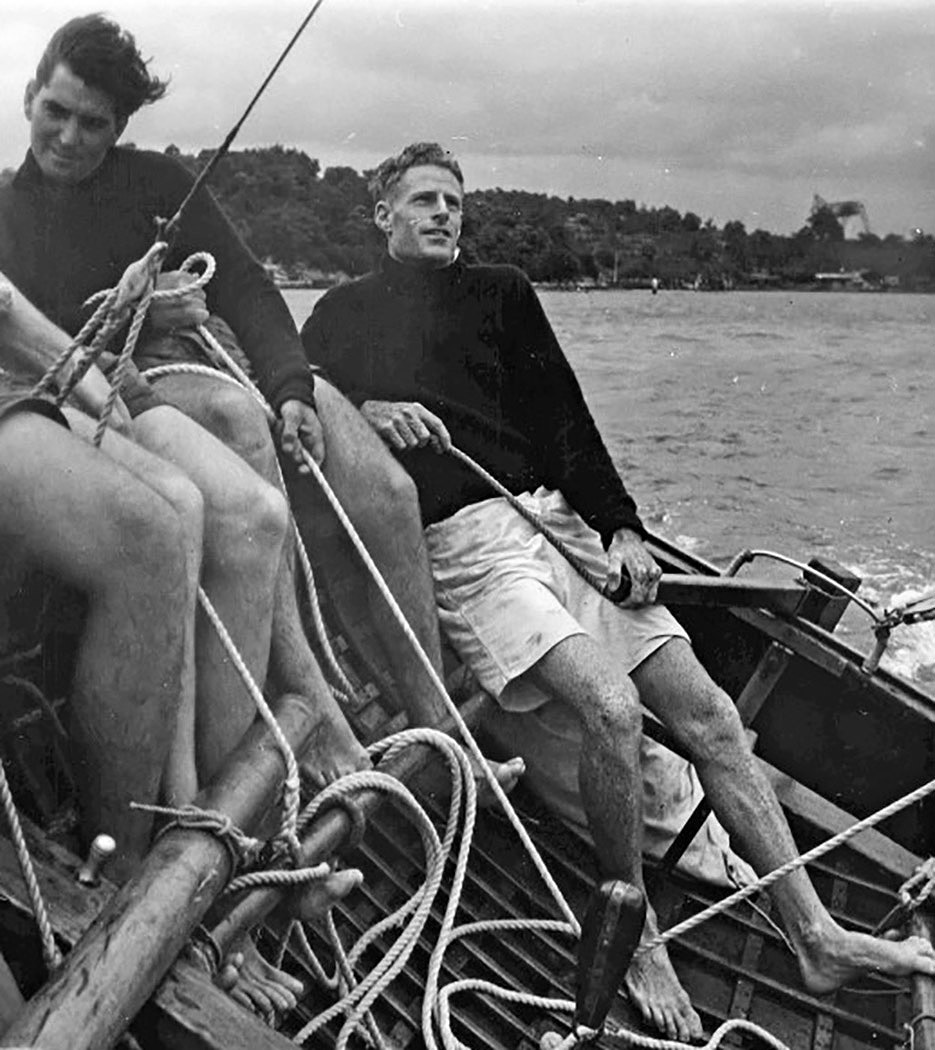 The late Bill Barnett was a famous sailing identity who designed, built and raced world champion boats from 18ft Skiffs to international 12 metre class yachts to challenge for The America’s Cup.

Born in 1915, as a teenager, he began racing competitively in a 12ft canvas class dinghy called Myra (named after his father's first 10 Footer), then in 1934-1935 won the NSW Championship, which was the beginning of a successful sailing career.

Barnett once recalled, he built his first dinghy “at around age fourteen.”

When the Sydney Flying Squadron resumed racing 18s after the WWII years, he was part of a syndicate which bought the champion Jenny Too skiff from Norman Wright Snr in Brisbane.  He continued to win many championships during the 1940s, including the 1946-1947 NSW Championship.

Bill designed and built the 6-foot beam Myra and won the 1948-1949 Australian Championship then improved his design and built Myra Too, which dominated the 18 Footer class by winning the NSW, Australian and Giltinan world Championships during the 1950-1951 Season.

Myra Too blew all of her opponents out of the water in the 1951 Giltinan Championship, winning all three races of the regatta with astonishing ease.

New Zealand's Jack Logan was expected to be a strong challenger in his new boat, Tarua, after the regatta remarked “Myra Too was in a class by herself.”

Myra Too was exceptionally suited to the conditions of Sydney Harbour.  She had a powerful Marconi rigged big sail and showed good all round speed in any conditions.  Barnett had made the boat a little finer than most 18s and with a bit more flare on the topsides forward.

The planking was rounded into the stem to give the hull a streamlined shape overall, and Barnett ensured that the top plank ran full-length from stem to stern.

Myra Too also boasted a light duralumin fin which was 55lbs lighter than the conventional heavy steel fins and a new bent back 'banana' mast.

The ability of Bill Barnett to expertly read and react to the conditions on Sydney Harbour and a top line crew of Sid Ferguson (bow), Fred Evennett (jib), Andy Costyn (swinger), Jack Davies and bailer boy Brian Stewart to carry out Barnett's call made Myra Too almost unbeatable.

Barnett produced many champion boats from his Berry Bay boatshed and established an excellent reputation as a shipwright.  Historian John Stanley says “Bill was extremely talented and prominent in the diagonal, double skin method of construction” which led him to be highly sought after for a wide variety of different boats.

In the late 1960s, Barnett's career reached even greater heights when he was approached to build an international 12 metre class yacht, Warwick Hood-designed Dame Pattie, for Australia's 1967 challenge for The America's Cup.

Intrepid USA, Bus Mosbacher, won the series 4-nil at Newport, Rhode Island in September 1967, but Dame Pattie's backer Sir Frank Packer was prepared to fund another Cup challenger, named Gretel II, in 1970 and Barnett was again chosen as the builder.

In 1968, Bill Barnett designed and built a boat to be skippered by Rod Zemanek in the 1968-1969 Season.  Zemanek approached Norman G Booth to sponsor the boat and Booth asked his mate Bill Barnett to build it.

Booth and Barnett had raced together in 5.5m championships and were part of the afterguard on Dame Patie.  As a gesture of friendship, Booth named the boat Willie B.  The crew was Ian Perdriau (sheet hand), Bob Ferris (jib hand) and John Stanley (forward hand).  Willie B was the first 18 Footer to sail with all four crew members on trapeze.

The boat performed at the top level throughout the 1968-1969 Season and tied the 1969 Giltinan world Championship with Bob Holmes' Travelodge, following a sensational disqualification for a breach of the port and starboard rule after winning Race 3 of the regatta.

This led to the first ever sail-off between the two boats to determine the champion.  The two skiffs were separated by just a few secs. as they raced around the entire Brisbane River course, and the lead changed many times, before Travelodge finally won the race by just 26s.

In October 1971, a devastating fire in his boatshed destroyed the structure and contents.  He began winding his business down in the 1980s, and in 2012 was awarded the Medal of the Order of Australia ‘for service to the boatbuilding industry as a designer and craftsman, and to the sport of sailing’.

(This article was put together with information from John Stanley as well as Penny Hyde from the Australian National Maritime Museum.)